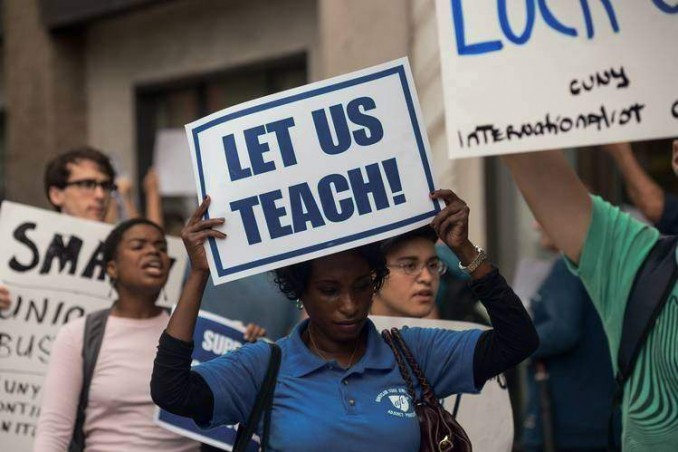 Long Island U. faculty locked out

Even before their contract expired on Aug. 31 and before classes start on Sept. 7, 400 members of the faculty and adjunct teaching staff at the Brooklyn campus of Long Island University received notice that they were being locked out as of Sept. 3. The university said that it was taking this measure to pre-empt a strike vote to be taken on Aug. 31, and that replacement faculty would be teaching classes.

The bargaining committee of the Long Island University Faculty Federation had been in negotiations since April, but a number of major sticking points have remained: a longstanding imbalance in salaries at the Brooklyn campus compared to those at the Post campus on Long Island, and changes to post-tenure review, adjunct teaching hours, and faculty input in class size and online curriculum.

In a LIUFF statement released Sept. 1, the union denounced the proposed parity clause between the two campuses as “inadequate” and called the changes the university wants “onerous” and “harsh.” LIUFF President Dr. Jessica Rosenberg said the union “will not be intimidated by a lockout that is unprecedented in LIU history, and will continue to bargain in good faith.” (Brooklyn Daily Eagle, Sept. 5) In fact, The Nation noted on Sept. 4 that this is the first time in U.S. union history that faculty have been locked out at a university.

The LIUFF announced that on Sept. 7, students will be met by a picket line at the Brooklyn campus at Flatbush and DeKalb avenues. A union meeting is called for Sept. 6. (liuff.net) To show solidarity with this struggle, sign the American Federation of Teachers letter at tinyurl.com/hj39lgm.

On Aug. 26, the largest picket line yet marched on the Trump Hotel Las Vegas, demanding a union contract for 500 housekeepers, porters, cooks and other mostly immigrant workers — 55 percent women and 56 percent Latinx. Joining them were members of the Ironworkers union, in Las Vegas for their annual convention, other unionists, and faith-based and community supporters. Although the National Labor Relations Board certified the workers’ election to join the Culinary and Bartenders unions (both affiliated with UNITE HERE) last December, Republican presidential candidate Donald Trump continues to show anti-worker, anti-union hostility by refusing to recognize the unions and negotiate a contract.

Meanwhile, on Aug. 16, Culinary Union Local 226 launched www.VegasTravelAlert.org/Trump, a website to educate and inform the travel industry about the ongoing, escalating labor dispute at the Trump Hotel. Workers there are paid wages and benefits worth approximately $3 less an hour in comparison with the thousands of union workers on the Las Vegas Strip. (culinaryunion226.org, Aug. 16 and 25)

Domestic workers in Illinois are celebrating a new bill of rights that Gov. Bruce Rauner signed into law Aug. 12. As of Jan. 1, nannies, housecleaners, homecare workers and other domestic workers — mostly older women, immigrants and/or women of color — will receive the minimum wage, protection from discrimination and sexual harassment, and one day of rest every seven days for workers employed by one employer for at least 20 hours a week. The bill of rights was needed to amend four Illinois state laws, capping a 5-year campaign to make Illinois the seventh state to adopt such protection — following California, Connecticut, Hawaii, Massachusetts, New York and Oregon. (In These Times, Aug. 16)

The National Domestic Workers Alliance seeks to eliminate the exclusion of domestic workers under the 1938 federal so-called Fair Labor Standards Act — an exclusion made under pressure from segregated Southern states, and adopted by most states.