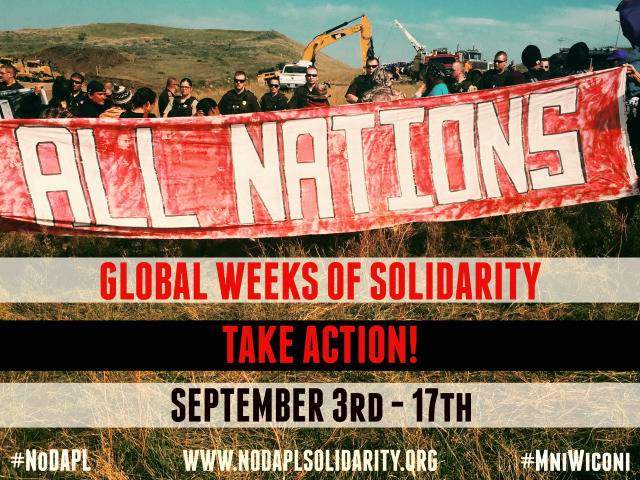 Representatives of some 300 Indigenous nations and their supporters have since Aug. 18 blocked the construction of the Dakota Access Pipeline, meant to be built under the Missouri, Mississippi and Big Sioux rivers in violation of the Standing Rock Sioux Tribe’s federally protected rights. Despite violent ­police-orchestrated terror, including the use of dogs, the heroic resistance led by Indigenous people has only grown stronger, sparking national and international support.

A series of solidarity events under the banner of “#NoDAPL Global Weeks of Action” began on Sept. 3 and will continue through Sept. 17. See nodaplsolidarity.org.

We are in full solidarity with the magnificent struggle of thousands of Indigenous and non-Native people who are at Standing Rock, in what is now known as North Dakota, protecting the land and water against the construction of the Dakota Access Pipeline. They are protecting the Missouri River and the drinking water of millions against the brazen efforts of corporations and corrupt politicians to push through an unnecessary pipeline on the Standing Rock Sioux Nation’s treaty land and despite Standing Rock’s lack of consent.

Indigenous Nations throughout the Americas have been on the frontlines of environmental devastation for decades. It is long past time for everyone to respect Indigenous leadership, listen to Indigenous voices and stand with Indigenous peoples in their many struggles.

We respect and honor the sovereignty and right to self-determination of Standing Rock and all Native Nations. We fully recognize the necessity of their right to refuse consent for any development or exploitation of land and water in their territories, from Oak Flat, Ariz., to Mauna Kea, Hawaii. We are painfully conscious of the ongoing poverty and genocide experienced by Indigenous people both on and off reservations.

Protecting the water and insisting that water is a human right are issues key to our future. While many people now know about the drinking water crisis in Flint, Mich., we also note that more than a tenth of Native homes in the the U.S. do not have clean drinking water. In addition to the water crisis in some colonies like Puerto Rico, we are aware that it also exists in Black and farming communities, while thousands of poor people live in cities that are aggressively shutting off water due to exorbitant fees.

We acknowledge that all people in the U.S. today are living on Indigenous land. #NoDAPL and hundreds of other ongoing Indigenous struggles are as close to our hearts as the monumental struggles of Black people to defend their lives. Our solidarity with Native struggles is not newly born. Members of Workers World Party have supported freedom for Leonard Peltier, Wounded Knee in 1973, The Longest Walk, Big Mountain, the 1990 Mohawk blockade, the 1975 Menominee takeover, Indigenous Peoples’ Day struggles in many cities and much more. Our members also have a long and proud history of supporting anti-pipeline and anti-fracking struggles.

As Black people whose Elders were attacked by dogs during the times of slavery and the Civil Rights struggles, we condemn the despicable actions of private security companies hired by the corporations behind the Dakota Access Pipeline that unleashed dogs and pepper spray on peaceful Water Protectors, including children. We share outrage at the injustice of peaceful Water Protectors having their road access blockaded by police and cell phone service cut off, while being subject to police surveillance and arrest.

Finally, we call on all people who oppose corporate greed and destruction to take immediate action — ­locally and nationally — in support of the #NoDAPL Water Protectors and to follow Indigenous leadership to stop fracking and pipelines wherever they live. The rapacious corporate greed of capitalism can only be overturned by millions of people united in revolutionary struggle.