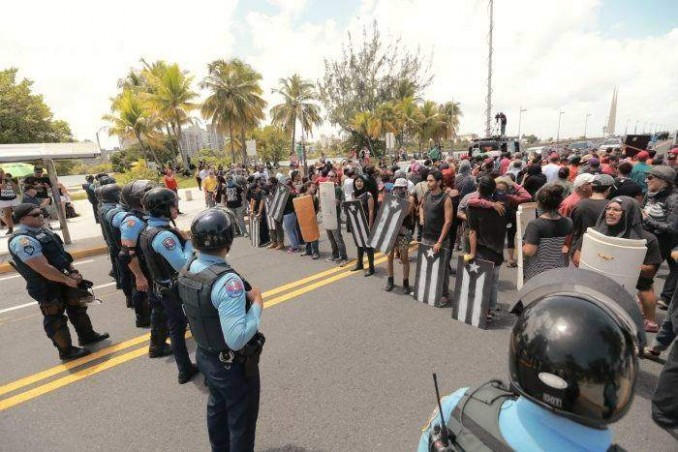 The First Conference on PROMESA – the federal Puerto Rico Oversight, Management and Economic Stabilization Act passed July 30 by the U.S. Congress – was not the success its organizers expected. The Puerto Rico Chamber of Commerce organized the Aug. 31 event at the luxurious Hotel Condado Plaza in San Juan to “educate” the business class on the consequences of the “PROMESA.”

Numerous social, youth and labor organizations called for a demonstration against the PROMESA law, its dictatorial Fiscal Control Board and the Aug. 31 conference. Such was the movement’s militancy that it made the conference fail. This triumphant outcome set a tone and sent a clear and resounding message from the Puerto Rican resistance about the attempt to impose a colonial junta.

Before describing the demonstration, it’s useful to know the expectations of the business class in Puerto Rico as well as in the U.S.

That same morning the conservative daily El Nuevo Día published an article under the triumphal headline, “PROMESA forum filled.” It claimed that 650 entrepreneurs and executives would participate, and U.S. Congressional Republican majority leader Paul D. Ryan and Sean P. Duffy, the driving force behind PROMESA, were to address the conference by video.

According to the article, several panels would analyze Detroit’s bankruptcy process, and “various private sector executives will also discuss the various proposals submitted to the congressional bipartisan working group that analyzes the economy of the island in light of the provisions in PROMESA. Analysts, bondholders and bond fund managers of Puerto Rico will also participate in the event.”

Apart from the Chamber of Commerce, the article mentions that the event was “coordinated by Birling Capital, which was founded by ex-vice president of UBS Financial Services and former head of the Economic Development Bank, Francisco Rodriguez Castro, and by the Select Global Advisory Group and its founder Luis Jesus Aponte. The activity also has the support of almost 20 firms and companies, including MMM Holdings, Triple-S, the accounting firms Kevane-Grant-Thornton and FPV & Galindez, Coca-Cola, Walmart, Amgen multinational, Telemundo, Uno Radio Group and Latin Media House.” (elnuevodia.com/negocios)

After learning, on the eve of the protest, that police planned to prevent the demonstrators from arriving, protesters began reaching the site before dawn that day and surrounded all entrances to the hotel.

The protesters were determined to prevent the conference at any cost. Meanwhile, police Strike Force and motorized units blocked the entrances to the hotel.

At the same time, demonstrators blocked the avenue leading to the hotel. Although it was not a massive demonstration, the demonstrators did have enough presence to successfully block the way for those trying to get to the conference.

Protesters sat in the middle of the avenue and built barricades with stones. They surrounded those who tried to attend the conference and tried to discourage them. Many people turned around. Demonstrators also threw water at some people to discourage them from participating.

Only a massive police presence — some demonstrators said it was triple their own number — allowed a few people to enter. In the videos of protesters and the transmission of television station WAPA, which covered the event live, the police could be seen surrounding those attempting to enter the hotel, shielding them from the anger of the demonstrators.

As always, the police brutally attacked the demonstrators.

However, the tactic of the activists was so successful that fewer than 200 people attended the business meeting, according to media reports. Although the organizers did not cancel the conference, they had to eliminate several panels.

Some candidates in the upcoming November elections for governor of Puerto Rico decided to cancel attendance at the conference. Earlier, the candidates of the Puerto Rican Independence Party, Maria de Lourdes Santiago, and of the Working People’s Party of Puerto Rico, Rafael Bernabe, refused invitations to attend the conference and made statements of solidarity with the demonstration.