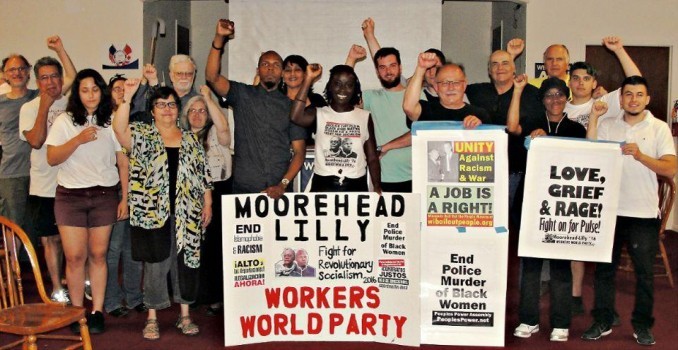 Poor and working people in Wisconsin will have a choice in November to vote for socialist Presidential candidate Monica Moorehead and her Vice Presidential running mate Lamont Lilly of Workers World Party. The candidates were certified to be on the ballot by the Wisconsin Elections Commission as of Aug. 25.

Neither Donald Trump nor Hillary Clinton represent the people — both candidates and their parties are pro-war, anti-immigrant, anti-Black, anti-lesbian-gay-bisexual-transgender-queer, anti-woman and anti-worker.

What a refreshing and much-needed contrast to have Moorehead as a choice, the only Black revolutionary socialist woman running for president. The candidate will be visiting the Midwest in September, making stops in Michigan, Illinois and Wisconsin.

Moorehead and Lilly’s campaign is in solidarity with the Black Lives Matter movement; defends the Milwaukee Rebellion against cops murdering Black and Brown people; supports unions, other workers’ organizations, the LGBTQ community and women’s liberation; and fights for a socialist system that puts people before profits and nurtures the environment.

There is a climate in Wisconsin of unrelenting racist austerity created by Wall Street forces and their political servants, such as Gov. Scott Walker and Milwaukee Mayor Tom Barrett. Many gains that working-class and oppressed peoples won over the past 100 years have been eviscerated.

It was in this climate that members and friends of Workers World Party conducted a signature-gathering blitz from June 30 to July 10 in Milwaukee, Madison and other areas of the state.

Activists gathered over 3,700 signatures in working-class and oppressed communities, where they received warm responses to the Moorehead-Lilly 10-point program. Two thousand valid signatures are required to obtain ballot status for presidential candidates in Wisconsin. During the blitz, WWP members and others from organizations such as the Wisconsin Bail Out the People Movement, also supported a community conversation event where Lilly spoke; a protest at the right-wing Bradley Foundation; and a Red, Black and Queer slideshow at the LGBTQ community center.

The WWP candidates are also on the ballot in Utah and New Jersey.

WWP members and friends are now organizing for a Midwest tour by Moorehead that will include stops in Detroit and other Michigan cities, Sept. 8-13; Chicago, Sept. 15; Milwaukee. Sept. 16; and Madison, Sept. 17. All events are free and open to the public.