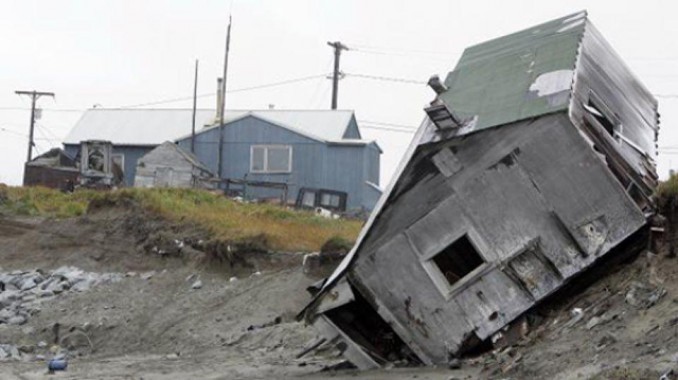 A collapsed home in Shishmaref, Alaska.

What ties together developments in the Alaskan village of Shishmaref, on Sarichef Island in the Chukchi Sea, with the extraordinary floods in southern Louisiana is global warming. The mechanisms and geography are different, but the crisis of climate change drives the situation in each location.

Sarichef Island has been falling into the Chukchi Sea for 35 years, said 18-year-old Esau Sinnok, Shishmaref inhabitant, in Paris. He was attending the 2015 climate change talks to raise the drastic impact of global warming in the Arctic. His commentary about this crisis was published in the Alaska Dispatch News on Dec. 9, 2015.

Iñupiaq communities like Shishmaref grew up hundreds of years ago when the Thule, their ancestors, developed the technology to catch and cut up whales to use for food and other essential needs. This process required large numbers of people who could live in fairly settled communities since these marine mammals swam by in open waters past the landfast ice (sea ice which annually attaches to the coastline or ocean bottom).

Shishmaref still depends on fishing and hunting to sustain itself, but the ice its hunters need in order to cross safely is forming later in the year, due to global warming, making it harder to access enough meat and fish. Sinnok said it “even rained during the winter last year,” as the weather was so warm. (ADN)

The village is far north of the Arctic Circle. Much of the community is built on permafrost, which has been thawing throughout the Arctic. With its school and many residents’ homes falling into the ocean, and the Chukchi Sea’s waves pounding against the island unhindered by landfast ice, a majority of Shishmaref’s people said it was time to move. On Aug. 18, they voted to relocate their entire community.

That day, Sinnok told National Public Radio that his village “will be under water within the next three decades” — and if nothing is done, the community will be forced to move.

Many of Alaska’s Native communities face similar challenges. The U.S. Government Accountability Office reported in June 2009 that 31 Native communities were in “imminent danger” due to erosion and flooding. The key question is how to pay for the moves, given that these are Alaska’s poorest communities.

Louisiana: And the rains came

Beginning on Aug. 12, a few low-pressure weather systems stalled around Baton Rouge, La. Fueled by the warmest July on record in the warmest year on record, an extremely humid, tropical air mass started streaming off the warmer than usual waters of the Gulf of Mexico.

When this air mass hit the low-pressure systems, it started to rain — and it kept raining. The three-day totals were amazing: Watson, La., got 31.39 inches of rain; several other communities got between 20 and 27 inches in three days.

The National Weather Service and most government entities involved in disaster relief and preparedness were caught off-guard. They didn’t even have a name for this storm.

So much water falling in so short a time produced huge floods. Areas where the Federal Emergency Management Administration and the Weather Service assessed that the chances of a flood in any given year were one out of 500 — even one out 1,000 — were inundated.

These predictions are based on the assumptions that the climate is stable, and that the occurrence of weather events, like hurricanes and tornadoes, can be estimated based on past history. But with the climate changes due to global warming, predictions that such a flood would occur once in 100 years or 500 years are no longer valid.

The Advocate, Baton Rouge’s daily newspaper, reported that this nameless August flood damaged 160,000 homes, with an estimated value of $20 billion. Less than half the homes in the Baton Rouge area have flood insurance, which, in any case, is not designed to fully reimburse the people whose homes were impacted. Some of the damage to schools, hospitals and city facilities is covered by insurance; much is not.

NPR and other media reported that some of the people flooded out in August suffered the same fate in New Orleans 11 years ago after Hurricane Katrina. The working and poor people of Baton Rouge, many of them African-American, Latinx, Asian and Indigenous, will pay for these floods for a long time.

Climate change, both in Alaska and Louisiana, hits the poorest people in society the hardest.