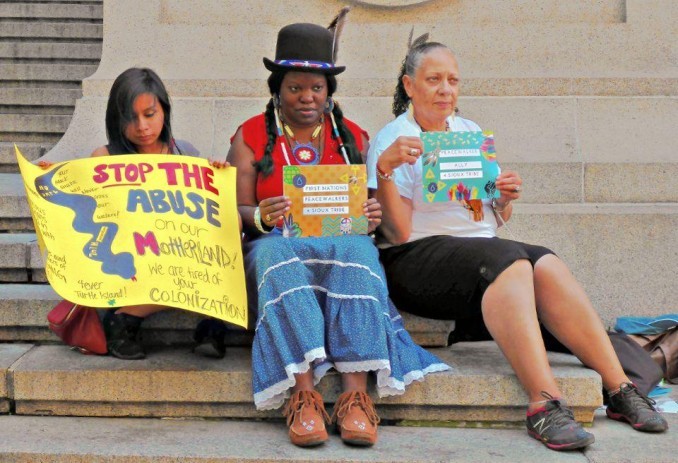 Protest outside Museum of the American Indian in NYC in
solidarity with the struggle in North Dakota, Aug. 27.

Following is a statement published in mid-August on the site of The Red Nation about the important environmental struggle in North Dakota led by Indigenous peoples against the threatened pipeline under the Missouri River.

Brave resisters and water protectors descended on the Dakota Access Pipeline construction site to halt its construction as it lurches towards the Mni Sose, the Missouri River, at Cannonball, N.D. The Standing Rock Sioux Tribe and the Oceti Sakowin (The Great Sioux Nation) have opposed the pipeline and all pipelines trespassing treaty territory, as defined by the 1851 and 1868 Fort Laramie treaties.

The Red Nation calls on everyone to support resisters and water protectors as they put their lives on the line to halt this devastating wasicu, fat-taker capitalist pipeline. On July 27, the Standing Rock Sioux Tribe filed a lawsuit in the District of Columbia to enforce the tribe’s federally protected rights against the pipeline’s construction.

On August 24, Standing Rock as well as several other Native Nations will have a court hearing to undo the U.S. Army Corps of Engineers’ approval of the pipeline.

In violation of treaty law, the Corps negotiated the pipeline’s passage with the Texas-based pipeline corporation Energy Transfers through treaty territory despite massive protests citing the desecration of burial sites and culturally sensitive areas as well as threatening clean drinking water for millions. The Corps is also responsible for the continued violation of Native water rights by altering the flow of the Missouri River.

In the 1950s and 1960s, the Corps, working with the Bureau of Indian Affairs, constructed 107 dams and six major dams on Native treaty territory. These dams flooded 611,642 acres. More than half of this land was Native land and resulted in the removal of 600 Native families. The Corps continues to violate Native water rights as defined by the Winters Doctrine, which prohibits altering the flow of rivers or the selling of water rights within original Native treaty territory even if that territory has been diminished.

Natives and non-Natives still suffer from the devastating effects of these dams and forced relocation. The Missouri River has never recovered and 90 percent of its wild game and plants were annihilated.

In typical industry fashion, the public and vulnerable Native communities will pay for cleanup and contamination when — not if — the pipeline breaks.

Bakken oil and gas production, as it peaks, has already devastated the Native and non-Native communities, leaving the land and water dead and communities torn apart. Yet, oil and gas companies continue to reap huge profits as Bakken jobs decline, the land becomes more unlivable, and the social malaise of violence inherent to boomtown economies continues to wreak havoc.

Meanwhile, the Energy Transfers corporation is attempting to sue the Standing Rock Sioux Tribe for protesting the pipeline and law enforcement is arresting resisters and water protectors, and the true criminals walk free. Instead of merely stopping Dakota Access, we demand that the Army Corps and Energy Transfers be held accountable for the crimes of putting at risk vulnerable water supplies, the public at large and the violation of treaty rights. We demand that their profits — and the assets of all fossil fuel companies responsible for climate change — be seized to pay for the cleanup and to help begin to mitigate the deadly effects of climate change.

Capitalism is the enemy of all life and it must be stopped!

We must also recognize that upholding Native treaty rights is essential to combat climate change and benefits everyone. We demand that the 1851 and 1868 Fort Laramie treaties be fully obeyed as law and the restoration of the original treaty lands to the Oceti Sakowin.

In the Spirit of Crazy Horse!
Hecetu Welo!
The Red Nation
tinyurl.com/jf2ll9k