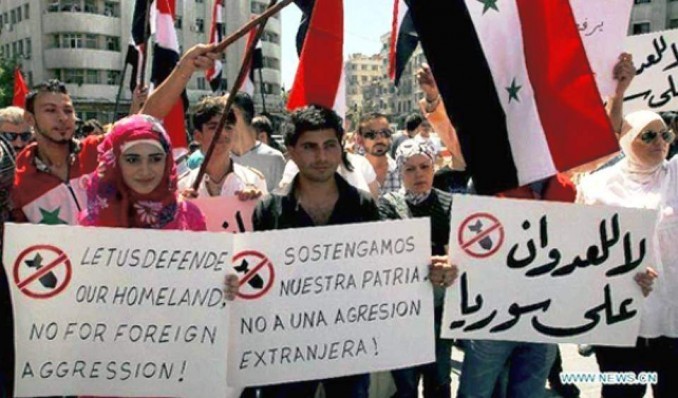 No matter who drops the bombs, no matter who fires the shots, guilt for the civilians killed in and around Aleppo, Syria, lies with the U.S., other NATO imperialist governments and their allied regional powers in West Asia. These allies include Israel, Turkey, Saudi Arabia and the other Gulf monarchies, which armed and funded the anti-Syrian forces. The U.S. is at the head of the gang.

It is important to make this point clear if we are to counter the fraudulent arguments pushed by the U.S. government and the corporate media.

These arguments also blame the Syrian government forces and their Russian allies for any civilians killed in the Aleppo fighting.

It is especially important to counter the media arguments because they aim to justify an increase in U.S. military presence in Syria. Their implication is that having U.S. forces “on the ground” as well as bombing from the air will make things safer for Syrian civilians.

How hypocritical can they get — making such a preposterous claim right after the 71st anniversary of the Hiroshima and Nagasaki bombings, in which it took only minutes for the U.S. Army Air Force to obliterate two civilian cities in Japan.

Certainly the Pentagon knows the consequences of its air assaults, given its massacre of civilians in Korea, Vietnam, Laos, Cambodia, Iraq, Yugoslavia, Afghanistan, Libya and now in Syria itself.

U.S. imperialism bears the guilt for tens of millions of civilians killed and maimed, and tens of millions more made refugees since 1945. In addition, the U.S.-NATO wars on Iraq, Afghanistan, Libya and Syria have exacerbated the tragic migrant crisis caused by the imperialist economic domination of Africa and West Asia and have driven whole families to leave their homes not knowing if they will even survive the journey to safety and a new life.

It is the responsibility of the anti-war movement here in the United States to reject the imperialist argument for a “humanitarian war.” Whoever is in the White House, the Pentagon is incapable of carrying out a war in defense of humanity or of human rights. The Pentagon is a weapon to enforce the demands of the 0.01% of humanity who own and control the vast majority of the wealth of the world.

We say — and we expect all honest anti-imperialists to say — “U.S. and NATO military, get out and stay out of Syria!”