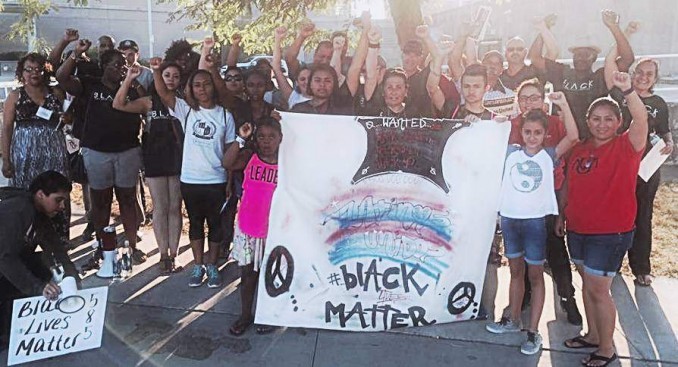 Rochester, N.Y. — On Aug. 4, a Latina/o group stunned the Rochester Police Department with a militant demonstration in front of the Rochester Public Safety Building.

The cops were frantic. Although the protest was completely peaceful, bus traffic was diverted from the demonstration site, concrete barriers were erected, and most RPD employees were sent home early. The Public Safety Building was closed from 4:30 p.m. to 7 p.m. because of the protest.

Last month, police arrested over 70 protesters at a BLM rally in Rochester. Police actions, which included brutalizing some demonstrators and the arrest of two Black journalists, have brought them considerable local criticism.

Ana Casserly, an activist and advocate for local Latina/o families, said the rally was meant to show unity among African-American and Latina/o people on the issue of policing in minority communities. “All together, we can make a difference, live together and make a difference,” she said. (Rochester Democrat and Chronicle, Aug. 5)

Casserly said it’s important for the two groups to stand together, as they have much in common. BLM advocates also attended the rally.

Juan Collado, 16, and one of the rally organizers, said: “The people need to hear about all of us. We’re united with Black Lives Matter. … We’re still humans and we’re still people. All of us need to be together.” (Democrat & Chronicle)

The protest took place on the eve of the local Puerto Rican festival. For nearly a decade, the RPD has routinely harassed impromptu parades that often march on the last day of the festival.

Rochester has a large Latina/o population for the size of the city, about 35,000 out of 210,000. These Latina/os are subject to similar kinds of discrimination and oppression that other Black and Brown people experience in housing, education, jobs and poverty, as well as police harassment.

Rochester has the second highest child poverty rate in the U.S for similarly sized cities. Over one-third of city residents live in poverty. Over 50 percent of Rochester’s children are poor. (Democrat & Chronicle, Nov 19, 2014)

In 2014, the RPD had a racial arrest disparity rate greater than that of Ferguson, Mo. (Democrat & Chronicle)

The signs of solidarity between Latina/os and the BLM movement are a significant and welcome development, and should be supported by progressive people everywhere.