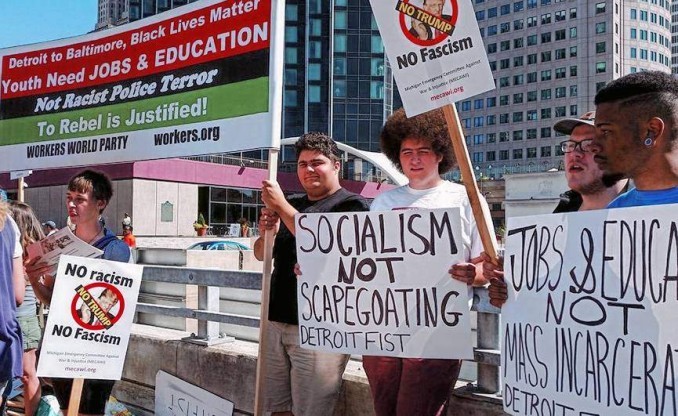 A thousand protesters of Trump’s hate and racism converged outside the downtown convention center. They included union members from the United Auto Workers; American Federation of State, County and Municipal Employees; Michigan Education Association; and American Federation of Teachers; among others. It was a multinational, multigender gathering of protesters young and old.

Activists with Workers World Party and FIST (Fight Imperialism, Stand Together) youth organization led militant chants throughout the demonstration. When one of less than a handful of Trump supporters unfurled a Confederate flag — a hated symbol of racism and slavery — a FIST member quickly tore it from his hands.

Revolutionaries denounced Trump and the racist, fascist movement he has aroused and called for socialism. Workers World newspapers were distributed, as were palm cards inviting people to hear WWP presidential candidate Monica Moorehead in Detroit on Sept. 10.

Despite a heavy police presence, protesters were not confined to the outside. About two dozen people were ejected by security from the convention hall, including a Muslim former state representative, for their actions during Trump’s speech, which included simply yelling “Racist!” Twenty women shouted out questions about Trump’s treatment of women. (mlive.com, Aug. 8)

The candidate received a standing ovation from the capitalists attending the event. Among Trump’s proposals are a reduction in corporate taxes, elimination of the death tax, a 15 percent limit on income taxes for all businesses, and gutting environmental regulations and mandates.