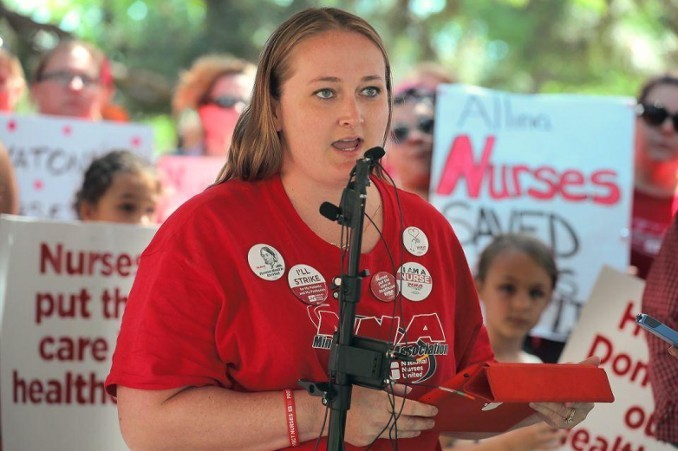 The 4,800 nurses at five St. Paul, Minn., area hospitals conducted a one-week strike in late June to pressure Allina Health to provide basic information they need to bargain effectively. As of July 22, the nurses, represented by the Minnesota Nurses Association, an affiliate of National Nurses United, are still in negotiations with Allina management, which hasn’t budged since April. The critical issue is health care coverage.

Allina, which has had a net income of $1.3 billion over the past six years, wants to eliminate the nurses’ health insurance plan and move them onto a closed network plan that requires much higher deductibles, higher overall out-of-pocket costs and limited coverage out of network. This would radically increase nurses’ annual health care costs by thousands of dollars and could wreak havoc if they have serious health problems. Meanwhile, wages, staffing levels (which nurses say are dangerously low) and workplace safety are still on the table. The next negotiating session is set for Aug. 1. To support the nurses, sign their petition under Issues & Advocacy on mnnurses.org.

Hundreds of farmworkers, represented by Familias Unidas por la Justicia, and labor, faith-based and community supporters held their annual march to the Sakuma Berry Processing plant on July 14 in a celebratory mood. After four years of fighting for union recognition, the CEO of Sakuma Farms had finally agreed to develop a memorandum of understanding leading to a collective bargaining agreement with FUJ. However, security guards at the plant must not have gotten the memo because they held the workers’ delegation for 20 minutes before allowing them into the plant. “Even in spite of this rudeness, we are still willing to meet with the Sakuma CEO … and begin a fair and transparent negotiation process without intimidation,” said FUJ President Ramon Torres. The FUJ, an affiliate of the state labor council, is an independent farmworker union in Burlington, Wash., fighting for a contract to ensure that the predominantly immigrant workers receive living wages, fair treatment, respect and dignity.

A third of manufacturing workers on public assistance

After years of wage cuts in manufacturing industries and for the first time in decades, manufacturing wages now rank in the bottom half of all jobs in the U.S., according to “Producing Poverty: The Public Cost of Low-Wage Production Jobs in Manufacturing,” released May 10 by the University of California at Berkeley’s Center for Labor Research and Education. Just over a third of all U.S. manufacturing production workers and half of those hired through temporary agencies rely on at least one public assistance program to support themselves or their families. In 2013, the typical manufacturing production worker made 7.7 percent below the median wage for all occupations. The Labor Center calculates that low wages in manufacturing cost taxpayers approximately $10.2 billion a year in public assistance.

What led to that change is the rapid growth of low-paying temporary positions where workers are employed by staffing agencies, which now account for 9 percent of all frontline manufacturing jobs; less than 1 percent were employed by staffing agencies 25 years ago. Temporary workers like assemblers and fabricators earn a median wage of $10.88 an hour, compared to $15.03 for those hired directly. The rate of temporary workers on public assistance is just below 52 percent of fast food workers. Ken Jacobs, chair of the Labor Center and co-author of the report, noted, “The reality is the production jobs are increasingly coming to resemble fast-food or Walmart jobs, especially for those workers employed through temporary staffing agencies.” Eight of the 10 states with the highest rates in public assistance programs for production workers are in the South. Mississippi is the highest at 59 percent. New York and California are the other two highest.