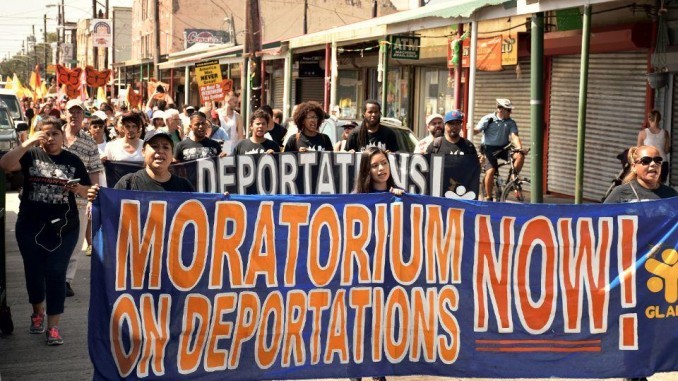 Over 500 undocumented and other immigrants and their supporters held a Migrant Rights March on July 25, the first day of the Democratic National Convention in Philadelphia.  Activists came from as far away as Georgia, Louisiana, Illinois and Tennessee to demonstrate their commitment to immigrant rights at the site of the DNC and to stand in sharp contrast to the attacks on immigrants that had been launched earlier by Republican presidential candidate Donald Trump during his acceptance speech.

Juntos, the #Not1More Campaign, the Georgia Latino Alliance for Human Rights, the Congress of Day Laborers and other groups gathered in South Philly. They rallied and then began to march from Capitolo Field, in a neighborhood where many Mexican, Honduran and other Central American migrants live and work. As the temperature reached 95 degrees, organizers handed out bottles of water and fresh peaches from a nearby shopping area, long known as the Italian Market, but where many vendors from Latin America and Asia now sell produce and run stores and restaurants.

Their demands were clearly stated on many colorful banners and signs: “Moratorium on deportations NOW,” “Dismantle ICE” [Immigration and Customs Enforcement], “End all detentions” and “Ni [email protected] más” [Not one more]. Another sign, “Shut down Berks,” referred to a facility 60 miles west of the city where hundreds of refugee mothers and their children are being held in the Berks Family Detention Center. One Latina held a sign reading: “The only ICE we want is water ice,” referring to a frozen delicacy popular in the Mid-Atlantic Region.

Marchers chanted “Undocumented! Unafraid!” “No papers! No fear!” and other slogans in Spanish and English as they walked down Ninth Street, up Lombard and then down 13th Street through the “Gayborhood,” where participants wearing “Soy Queer [email protected]” shirts led the chant “Out of the closet! Into the streets!”  The march ended at City Hall, where a short rally was held.

The next day, in a strong show of Black and Brown solidarity, a migrant contingent carried a “Dismantle ICE” banner in protests led by two coalitions: “Black DNC Resistance against Police Terror and State Repression” and “Shut Down the DNC.”  Fernando Lopez spoke at a City Hall rally from the back of a pickup truck, leading the crowd in chanting, “Dismantle ICE! Defund the police!”