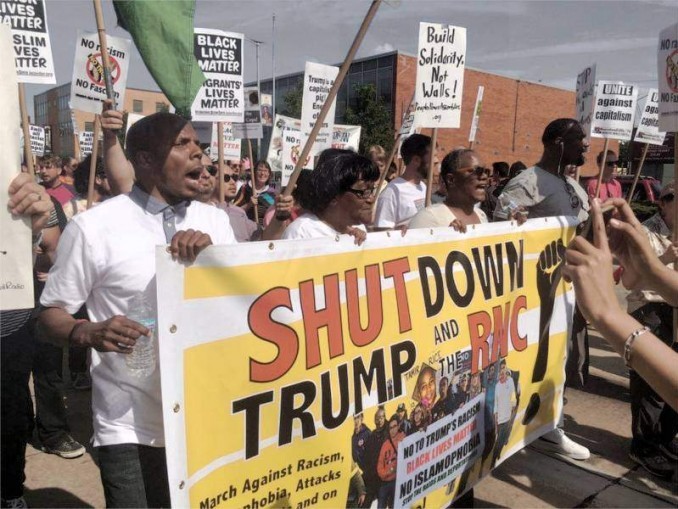 The Republican National Convention produced as many flat-out lies as there are flies on a dung heap. Quite a few of the lies have been exposed in various capitalist media. But there’s one lie regarding Donald Trump and his followers that gets repeated as good coin by those who know better.

It’s that Trump’s constituents are workers. That his rabid, bigoted trash talk rings a bell with white workers, who are uneducated and lack refinement, just like Trump.

Well, that’s a lot of hooey. The people who cheered Trump at the RNC are racist and anti-immigrant, all right, but they’re not the ones who are feeling the real economic pain of a system that has impoverished so many while wildly enriching the very, very, very few on top, including Trump.

When Trump rails about immigrants taking “American” jobs, and the crowd cheers, are they really all yearning to work as nannies, or pick crops, or be day laborers, or toil in a factory that will soon shut down because the company moves its plant overseas?

Other Republican primary voters had even larger incomes — those who voted for Kasich clocked in at $91,000, for instance. So it’s true that within the Republican electorate, Trump appealed to the not oh-so rich. But still, the base of this multimillionaire is definitely not in the working class. (See “The Mythology of Trump’s ‘Working Class’ Support,” tinyurl.com/jh5ncd4.)

In 2011, half the people in the U.S. had a median household income of less than $50,000, and they made up the bulk of the multinational working class. One quarter of U.S. households took in less than $25,000 a year, and they were generally headed by women and/or people of color. Since then, workers’ incomes have risen only slightly.

The delegates who cast ballots for Trump at the convention were of course even better off than those who voted for him in the primaries. It takes money to be a Republican delegate. The party’s California delegates were advised that their accommodations alone would cost them between $3,000 and $6,000. They stayed at hotels where rooms ranged between $300 and $400 a night. (cagop.org/national-delegation)

And there was plenty of wining and dining, you can be sure, as well as transportation costs. In that one week of reactionary frenzy, a delegate could easily have dropped what it would take a low-wage worker three or four months to earn.

Of course, if the delegates played their cards right, someone with even more money might eventually pick up their tab. Or so they would hope.

The neoliberal capitalist media have slandered the working class by linking white workers to Trump. What makes this even more ironic is that for a long time, the myth in this country was that there was no working class any more. If someone earned a living wage without having to work two jobs, that worker was suddenly, presto change-o, in the “middle class.” At the same time, the most oppressed workers were referred to as the “underclass.”

“Middle class” and “underclass” were code words meant to separate white workers from their class sisters and brothers, who historically have been paid less because of this country’s legacy of racist oppression, beginning with the conquest of the Indigenous peoples, then reinforced by the vile institution of chattel slavery, by importing underpaid Asian workers to build the railroads and more recently by immigrant workers forced to work at low wages.

This is not to say that there’s no racism among white workers. But looking at who came out for Sanders and Clinton, it is clear that most white workers have not bought into Trump. And his standing with Black and Brown workers is of course in the sub-basement.

Trump’s program, if it can even be called that, since he appears to be making it up as he goes along, is to capitalize on the frustrations of those in the middle class who had dreams of becoming as rich as he is, but saw their ambitions thwarted by the crisis that began in 2008, just around the time that Obama was elected president.

How convenient for Trump that he could blame the first Black president for a capitalist downturn that had nothing to do with Obama. At the convention, he didn’t even have to say “Black” or “immigrant” (which Trump insinuates with his “birther” nonsense about Obama). All he had to do was mention Obama’s name to evoke the most disgusting displays of concentrated racist hatred.

The Trump campaign has given a green light to the misogynists, the racists, the flag wavers, the “law and order” cheerleaders for police brutality. That is its main danger — ratifying and encouraging a return to the “good old days” that unfortunately aren’t over. Even the Nazis and Klan have scuttled out of the woodwork under Trump’s protection. David Duke, a notorious former Klan grand wizard, got into the spotlight by endorsing Trump and then announced his own candidacy for the Senate. Trump, asked if he would repudiate Duke’s support, pretended not to know who he was.

Trump is trying to capitalize on reaction to the progress that has been made against oppression after decades of mass struggles in the streets. This comes at a time when Black Lives Matter, the movement for LGBTQ rights, the struggles against deportations and mass incarceration, the women’s movement for reproductive freedom and the low-wage workers’ movement all have fought hard and raised consciousness, resulting in some legal gains — not a lot, but enough to inflame the right wing.

Trump, Clinton and the Pentagon

The one area where Trump has mouthed sentiments that seem to go against this grain is the military. Unlike all other imperialist candidates for decades, he has talked about pulling back troops fighting abroad, kind of lumping it in with ending or “re-negotiating” trade agreements.

What Trump would really do as president is another thing. The U.S. imperialist state relies heavily on its ability to create havoc around the world to pave the way for super-exploitation by transnational capitalist enterprises established here. It also provides contracts worth hundreds of billions of dollars to the politically powerful merchants of death. But right now Trump seems to be tapping into war-weariness, among even those who might be considered a bastion of pro-war sentiment.

Of course, part of this is undoubtedly to outflank Hillary Clinton, who is a proven hawk. But that his stance resonates among conservatives should be taken note of, especially as the crisis of miserably inadequate health care and drug addiction among military veterans reaches epidemic levels.

A recent study by the University of New Hampshire showed, “According to U.S. Department of Defense records, rural youth enlist in the military at a higher rate than urban and suburban youth, and in all but eight states, soldiers from rural areas make up a disproportionately high share of the casualties.” These are the geographic areas where the Republican Party is strongest.

The one bright spot in this election cycle is the determination of the progressive movements to stay in the streets and not be cowed by threats or persuaded by their “friends” that militancy is “counter-productive.” The demonstrations in Cleveland at the RNC and, as we are writing this, in Philadelphia at the DNC are strong and underscore that it is the struggle, not the capitalist two-party elections, that will bring to birth a better future. Right on to that.