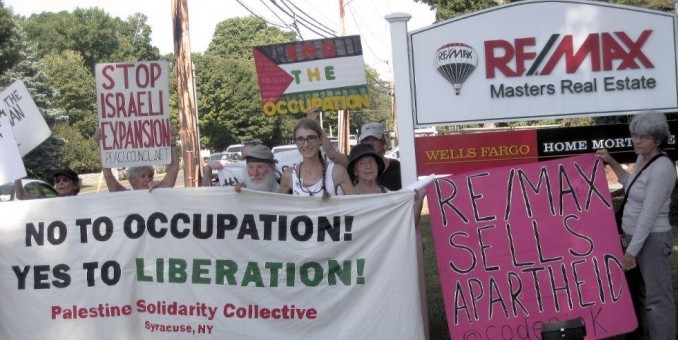 On July 15, a coalition of Palestine supporters carried the campaign to a RE/MAX franchise in Fayetteville, N.Y., an affluent suburb of Syracuse. The action was co-sponsored by Ithaca Code Pink, the Palestine Solidarity Collective of Syracuse and the Syracuse Peace Council/Justice for Palestine Committee.

The “Remodel RE/MAX” campaign, launched by Code Pink in 2014, emphasizes that the corporation profits from sales in illegal settlements: “By advertising, selling and renting homes in settlements, both the Israeli franchise of RE/MAX and RE/MAX LLC, the owner of the global franchise network, facilitate and benefit from the transfer of Israeli civilians into occupied [Palestinian] territory and the associated human rights abuses.” (remodelremax.org)

A local RE/MAX representative, disclaiming all responsibility, rejected the organizers’ attempt to present him with a petition bearing more than 2,500 signatures. The RE/MAX franchise called the local police, but demonstrators persisted in the narrow public right-of-way separating them from traffic.

Hundreds of rush-hour commuters got an eyeful of the protesters.