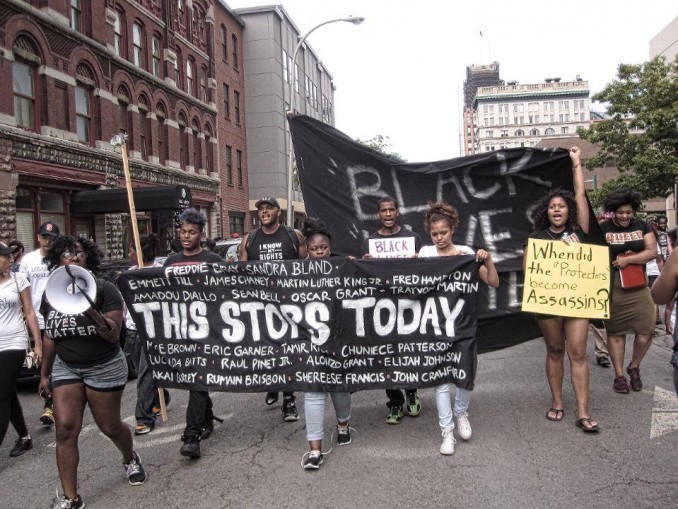 Some 500 people challenged racism and police terror in Syracuse, N.Y., on July 18, in a militant, high-energy and unified march. According to their press release, the newly formed Black Lives Matter-Syracuse group called the event “in response to ongoing murders of Black people of all genders, sexualities, abilities and ages” across the U.S. and to protest “police brutality against Black residents” in Syracuse.

Marchers gathered at a downtown emblem of Syracuse’s abolitionist history: the statue of William “Jerry” Henry, who had liberated himself from slavery. In 1851, federal marshals arrested him in Syracuse under the Fugitive Slave Act, intending to return him to enslavement.  But hundreds of abolitionists rushed to his aid, broke down the jail doors and freed him.

BLM-Syracuse leaders welcomed marchers, making clear they were continuing the necessary work of Black liberation. They noted that the “Jerry Rescue” was a moment when “common people came together to fight against an unjust system, one that was brutalizing Black bodies.”

Organizers began their activity by pouring a libation to the ancestors — Harriet Tubman, Martin Luther King Jr., Malcolm X and others — and asked marchers to call their own ancestors to be present. They read the Black Lives Matter statement of principles and drew especially loud applause for its affirmation of “Black queer and trans folks, disabled folks, Black undocumented folks, folks with records, women and all Black lives along the gender spectrum.”

A majority of marchers were African Americans, including many young people, families and the “OG’s [Original Gangsters] Against Violence” from the embattled South Side and West Side. Syracuse has the highest rate of extreme poverty among Blacks and Latinos/as out of the 100 largest U.S. metropolitan areas. (tinyurl.com/z4gre59)

Also present were many white allies, including churchgoers from Central Square, a conservative suburb. Young people from Buffalo travelled hours to join, and members of Ithaca Standing Up for Racial Justice (SURJ), a white allies’ group, were there.

BLM-Syracuse activists led marchers through the streets, chanting demands for the shutdown of police brutality, mass incarceration, economic inequality and “the whole damn system.” Speakers vehemently repeated those demands and others in front of City Hall and the “Justice Center,” which houses the Syracuse Police Department.

The BLM organizers also demanded an independent investigation into the most recent “death by police” in Syracuse of Terry Maddox. A cop killed the African-American man in June at a Father’s Day cookout on the West Side.

Numerous witnesses say Maddox had been unarmed. An outraged neighborhood crowd rose up and fought with police for half an hour after the shooting. A dozen people were subsequently arrested and charged with the offense of “inciting to riot,” for simply shouting during the melee.

Authorities continued a pushback against community outrage when cops in SWAT gear, accompanied by an armored vehicle as “backup,” ransacked a neighborhood home. The Department of Homeland Security tried to intimidate the planned march by “warning” the department’s downtown employees and closing the Federal Building early, initiating a wave of downtown business shutdowns.

But the people came anyway. At the end of the protest, defiant marchers massed in front of police headquarters. There, BLM organizers read a list of people killed by cops. Marchers chanted in unison, “I am,” in response to each name. Then, protesters shouted together the phrases of the Assata Shakur pledge: “It is our duty to fight for our freedom. It is our duty to win. We must love each other and support each other. We have nothing to lose but our chains.”

When BLM organizers announced their program was at an end, exhilarated protesters did not want to leave. Many stayed for another hour. Some marched to other areas downtown and returned to hold signs.

People in passing cars and buses honked and shouted agreement. Everywhere in front of the Syracuse Police Department, conversations were underway for future actions against racism and police brutality.