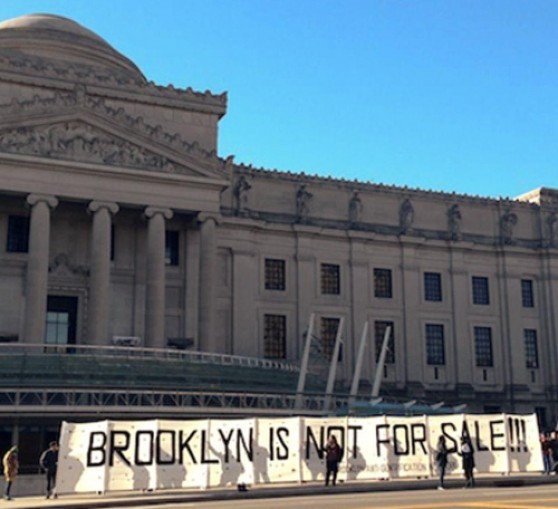 The Brooklyn Antigentrification Network protests in front of the Brooklyn Museum.

Gentrification and displacement are hitting neighborhoods hard, nowhere more so than Brooklyn, N.Y. Organizing against the impact of austerity programs in the New York metro area are groups including the Brooklyn Anti-Gentrification Network (B.A.N.), the Movement to Protect the People (MTOPP), Artists of Color Bloc (ACB) and Agitprop! artists.

In November 2015, grassroots groups and artists featured in the current Agitprop! exhibition at the Brooklyn Museum protested a real estate summit being held at the museum. Because of community outcry, the museum agreed to sponsor an upcoming forum on anti-gentrification and displacement, Sunday, July 24, from noon to 8 p.m.

From noon to 5 p.m., there will be workshops, panel talks and performances by Monsters of Brooklyn and Calpulli Tletl Papalotzin. Panelists will include Imani Henry of B.A.N.; Alicia Boyd of MTOPP; Antonio Serna of ACB; Betty Yu, the Committee Against Anti-Asian Violence; Ana Orozco of Uprose; and others.

At 5 p.m., visitors, groups and artists will form a Unity March to walk in solidarity with the tenants who live in the community. All will march from the museum down Washington Avenue to picnic together in Prospect Park.