Workers have had to fight for jobs for a long time. 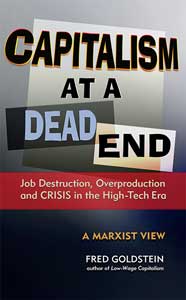 In response to the economic panic and depression of 1893, a small businessman from Massillon, Ohio, named Jacob S. Coxey organized a march from Ohio to Washington, D.C., of some 500 people to demand a government jobs program. Although widely popular, this effort fell on deaf ears, and the marchers were arrested on the Capitol lawn.

During the 20th century’s Great Depression, after tremendous struggles in the U.S. by unions and unemployed workers, the Works Progress Administration was established. Millions were hired at living wages to build hospitals, schools, museums, roads and other public facilities, as well as to work in the theater and the arts.

But for the last few decades, the capitalist class and their political minions from both bourgeois parties in federal, state and local governments have shifted strategies. Their “new” method to create jobs is to shower corporations with tax breaks and subsidies to coax them to hire workers. One such program was started in 2013 with great fanfare by New York Gov. Andrew Cuomo. Called “Start-Up NY,” this scheme provides corporations a tax-free ride for 10 years, with no corporate, sales, property, state or local taxes if they set up shop near specified State University of New York and City University of New York campuses in some 365 tax-free zones.

Cuomo said that this program would “supercharge” the economy. This was a “game-changing initiative” that would bring job creation to an unprecedented new level. A $211 million contract was signed with the advertising firm BBDO to tout the program.

The results? Start-Up NY generated just 76 jobs in 2014. The public was told that this was just a “slow startup” of the program — that soon thousands of jobs would be created.

On July 2 this year, the state announced that just 332 jobs were created thanks to the program in 2015. So over two full years, just 408 new jobs were created and the wages amounted to $32.3 million — just a fraction of the money sent to Madison Avenue businesses to advertise the program. Most of the companies participating in this program simply shifted their operations from one region of the state to another to take advantage of the tax savings.

The Start-Up NY boondoggle is just one more example of the generous “corporate welfare” payments by New York state. Some $7 billion is given each year as business subsidies, including “tax exemptions, tax credits, grants, tax-exempt bonds and discounted land to corporations, ostensibly in the name of job creation, economic growth and improved quality of life for all New Yorkers.” These gifts have increased each year since Cuomo took office. But much of this money is wasted, and some resulted in actual job losses, as “with little accountability, businesses often take the money and run.” (alignny.org, Dec. 8, 2013)

For the workers and oppressed in New York, the operating word is not relief but austerity. Reports by the Fiscal Policy Institute in 2015 and 2016 state:

Cuomo is considered a liberal Democrat. The Cuomo program of giveaways to big business and cutbacks for the workers and poor has been a fabulous success — for the rich! In 2014, the last year measured for the U.S. as a whole, the top 1% received 21 percent of all income. In New York state, they grabbed 30% of all income. In New York City alone, the heart of U.S. finance capital, they took a staggering 39% of the city’s entire income.

Meanwhile, New York state cities like Syracuse, Rochester and Buffalo have some of the nation’s highest concentrations of African-American and Latino/a people living in high-poverty neighborhoods.

Whatever they may say about “lifting up the middle class,” politicians from both parties are only interested in lining the pockets of their corporate sponsors off the backs of the workers and oppressed. In this capitalist system, only resolute struggle will win jobs with living wages for the unemployed.