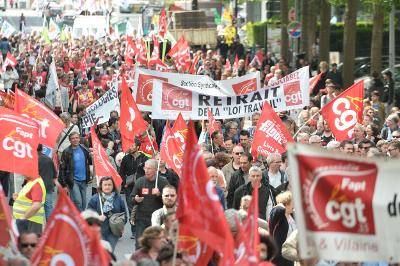 Faced with defiance by the unions at the government’s attempt to prohibit their 10th national protest over new anti-labor “reforms,” the regime ceded. Some 200,000 workers and supporters marched in Paris, Marseille, Lyon, Bordeaux, Rouen and other French cities.

France’s President François Hollande, Prime Minister Manuel Valls and Minister of the Interior Bernard Cazeneuve acted as if they were firmly and stubbornly opposed to allowing the June 23 protest, as strongly as they are opposed to making any concessions on the new labor law.

French TV played scenes dating from the last prohibited demonstration of the CGT (the General Confederation of Labor) in 1962, during which the cops beat nine members of the CGT to death at the Charonne metro station. Undaunted, the unions still insisted on their democratic right to march. Faced with determined unions backed by a growing wave of popular support in a country, where even doctors, lawyers and notaries hold marches, the government gave in — albeit grudgingly.

Palestinians were forbidden to bring their kaffiyehs on the march and observant Muslim women weren’t allowed to wear scarves covering their hair. All bags, backpacks and containers were searched; swim goggles (which offer eye protection from tear gas) were confiscated.

Still, 60,000 people showed up in Paris and marched around the Bassin d’Arsenal, a stretch of water leading from the Seine to Place Bastille, where the march started and ended.

The turnout for this demonstration, less than two weeks after the last major action, is a clear sign that French workers support their unions against the government’s attacks on their rights. Some commentators call the current series of anti-government protests the longest, largest and most sustained since the 1789 French revolution that deposed the monarchy.

The so-called Socialist Party (PS) manages the French government. Demonstrators held signs — in French social media — that call this regime “traitorous” because it tries to disguise its attacks on the working class as an attempt to promote employment. But making it easier to fire a worker doesn’t really increase employment; it increases profits.

The CGT chose June 23 to demonstrate to mark the day the French Senate as a whole took up the new labor law for debate. Many of the law’s anti-worker provisions were strengthened by Senate committees before the bill itself reached the Senate floor.

Another day of national demonstrations is set for June 28, the date the Senate sends the bill back to the National Assembly. The Assembly gets the final word on the bill.

It’s widely expected that the government will use its executive powers to enact the bill into law without a vote in the Assembly. Given the unpopularity of the bill and the government, the bill would fail such a vote.

French workers are still in the streets and still striking. They haven’t stopped struggling over this law and everything it represents. They have a chance for victory and deserve the solidarity of progressives throughout the world, including in the U.S.