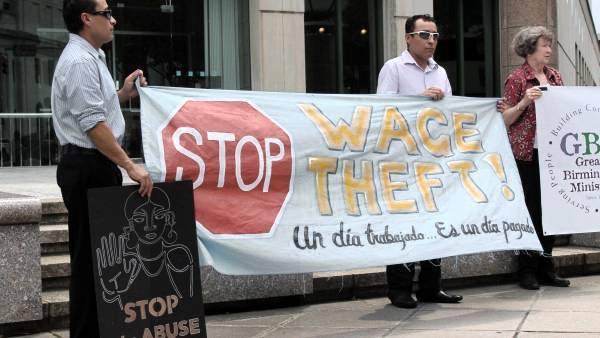 A bold action against wage theft was announced June 17 by the Adelante Alabama Worker Center and WOW (Winning Our Wages/Ganando Nuestros Salarios). Standing on the steps of the Hugo Black Courthouse in Birmingham, Ala., the groups gave notice that they had filed a federal lawsuit on behalf of three immigrant workers for stolen wages of up to $10,000 for each. WOW is a program sponsored by Greater Birmingham Ministries.

The three workers — identified as Gabriel, Rafael and Javier — had followed their employer from Florida to Alabama, doing hard work and waiting patiently for their pay. Now, courageously, they are stepping forward as part of a movement to hold the bosses accountable for their refusal to pay.

Jessica Vosburgh, director of Adelante, stressed, “For these three workers who are filing a suit today, there are 30 or 300 or 3,000 more workers, especially immigrants and people of color, who were too scared, intimidated or threatened by their bosses to stand up and exercise their rights under the law.”

The Economic Policy Institute calls wage theft “an epidemic,” saying workers lose hundreds of millions of dollars a year to employers who pay for some hours but not all — such as overtime or setting up a workstation at the start of a shift — or who simply refuse to pay. Loss of half an hour a day in pay for a minimum wage worker can mean losing more than $1,400 a year — the difference between paying the rent or eviction.