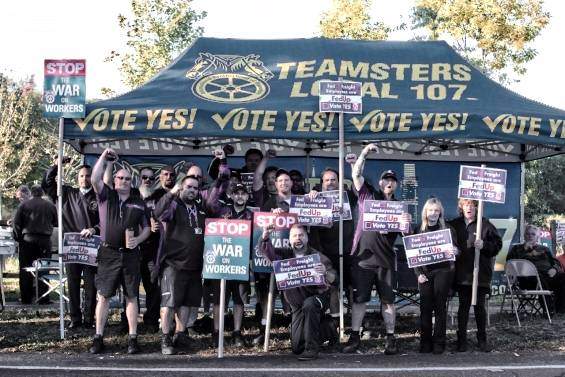 FedEx workers win a place at the bargaining table

“What they said couldn’t be done is getting done,” two Charlotte, N.C., FedEx drivers announced triumphantly in a June 11 video at ChangeFedExToWin.org. FedEx Freight workers in Philadelphia and Charlotte, represented by Teamsters Local 71, entered contract negotiations June 15 and 16, respectively, three months after a Ninth Circuit Court of Appeals judge ordered the company to bargain with the two locals. In its 45-year history, the notoriously anti-union FedEx had barred workers in the freight division from collective bargaining.

This labor victory culminates a years-long, David-and-Goliath struggle against FedEx, which during 2009-10 spent over $21.1 million lobbying Congress against labor rights legislation. Workers and supporters in the Teamsters union fought back on multiple fronts, with National Labor Review Board complaints and in federal court, on picket lines in California and at rallies in Philadelphia and Charlotte.

After the first Charlotte meeting with management, Teamsters Local 71 President Joe Eason declared, “We are going to hold the company’s feet to the fire during negotiations and we are committed to negotiating a first contract for the workers in Charlotte.” (TTnews.com)

Some 4,800 members of the Minnesota Nurses Association struck five hospitals operated by Allina Health in the Twin Cities metro area June 19-26. Despite a net income of $1.3 billion over the past six years, while workers and their families struggled after the 2008-09 recession, Allina has continued to dangerously understaff hospitals. Management demanded that the nurses accept a $10 million cut in their health plan. Of the five major health care groups in the area, four currently offer the plan Allina wants to cut. When workers rejected the offer, Allina refused to return to the bargaining table.

The nurses were joined on the picket line by members of the SEIU Healthcare Minnesota and Education Minnesota unions, city council members, and doctors and patients. “It might be a cliché, but for me it goes back to the old adage, ‘An injury to one is an injury to all,’” explained Brionna Harder, a teacher and member of Education Minnesota who supported the strike. (WorkdayMinnesota.org, June 23)

The nurses returned to work on June 26 under the terms of the previous contract. As of that date neither side had proposed a return to the bargaining table.

Two strike votes, on opposite coasts, showed the power of the strike threat, leading to much improved contacts in June. Hundreds of workers, represented by Department Store Union (RWDSU) Local 1-S, rallied outside Macy’s flagship store in New York City on June 2. While many workers at four area stores earn as little as $9 an hour, CEO Terry Lundgren’s total compensation in 2014 rose to nearly $13 million, up from more than $11.4 million in 2013. A vote to strike on June 15, the day the contract expired, sent Macy’s back to the table. On June 23, the 5,000 RWDSU members ratified a new, four-year contract by 97.5 percent. The agreement includes substantial wage increases; a better, more affordable health care plan; and fair schedules, including no mandatory work on major holidays. (rwdsu.org, June 24)

As of June 23, 400 members of Machinists Union (IAMAW) District Lodge 751 at Triumph Composite Systems in Spokane, Wash., voted by 82 percent to accept the company’s offer of a four-year contract and return to work on June 27. The company locked them out on May 10 after a strike vote of 93 percent on May 9.

The new contract made significant gains, curbing the two-tier wage and benefit system. By giving raises to the newer workers, the contract cut in half the 12.5 percent pay gap between workers hired before 2006 and those hired after. All workers get lump-sum bonuses totaling $7,000 spread over three years and all workers get a 3 percent raise the fourth year. The company will fund a new retirement plan for workers hired since 2013 and maintain the current health care cost-sharing plan. “What has happened here over the past six weeks is a shining example of the power of union membership where workers have the right to bargain with their employer,” observed IAM Local 751 President Jon Holden. (IAM751.com, June 24)