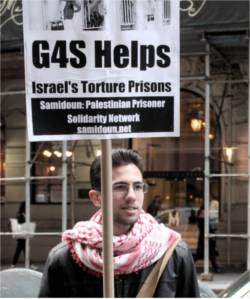 Three days after the horrific shooting deaths of 49 patrons at an Orlando LGBTQ nightclub, U.S. Senate Democrats seized on the massacre to demonize Muslims during a 14-hour filibuster in the name of “gun control.”

The gunman, Omar Mateen, worked as an armed guard for British-Danish conglomerate G4S, the world’s largest security company and second-biggest private employer. G4S holds contracts ranging from Israeli prisons, to its own private jails worldwide, to buses that deport migrants for U.S. Immigration and Customs Enforcement. As Mateen was a security guard also licensed by the state of Florida, no gun control proposal would have disarmed him, any more than it would affect police officers, ICE agents or other armed defenders of the interests of the wealthy.

Democrats advocating gun control, including President Barack Obama and presidential candidate Hillary Clinton, are unlikely to scrutinize the FBI’s role in the Orlando tragedy. In 2013, an FBI informant attempted to “lure Omar into some kind of act and Omar did not bite,” according to the St. Lucie County sheriff, Ken Mascara. (Vero Beach Press Journal, June 15)

Mateen joins a number of domestic attackers targeted by FBI investigations that typically attempt to entrap their subjects by provoking them to acts of violence.

Defenders of the state must avoid at all costs two pressing facts about Mateen — that he was an armed state agent who had been deliberately prodded to violence by elite state agents. Any diversion, from his private sexual behavior to his religious identity, is preferable.

During the Senate filibuster, Democrats proposed a measure to strip those on a “watchlist” maintained by the FBI’s “Terrorist Screening Center” of the right to purchase legal firearms. Despite its Orwellian name, the center does not claim to screen those who have committed recognizable “terrorist” crimes or are even plausibly suspected of having done so.

Instead, of the million plus people in the center’s database, many have been listed because of their political or religious speech, family ties, or even refusal to act as informants for the FBI.

“Almost to a person, these people on these watch lists are not charged with a crime ever,” Gadeir Abbas, an attorney for over 50 listed clients, told Shadowproof on June 17. Abbas added the common factor: “It is extraordinary to find anybody on a watch list that is not Muslim.”

While a haphazard list of Muslim names may offer a politically convenient scapegoat, there is no record of anyone on the “watchlist” ever using a gun purchased in the United States to commit a crime. Less than 100 have even tried to buy them.

This crude diversion from the violence of state actors toward a vulnerable minority group fits the history of gun control. According to University of California-Los Angeles law professor Adam Winkler: “The KKK began as a gun-control organization. If blacks were disarmed, they couldn’t fight back.” (“Gunfight: The Battle Over the Right to Bear Arms in America”)

Ronald Reagan, then governor of California, launched the modern era of gun control after a 1967 armed protest by Black Panthers at the state Capitol. In ensuing decades, Reagan’s “Mulford Act” and subsequent gun control measures across the U.S., including racially discriminatory “stop and frisk” policies, fed an exploding prison population.

But facing different political realities in 2016, the Senate Democrats are choosing a different target than their predecessors.

Those advocating further gun control must account not only for the bigotry of current proposals and the refusal to confront the guns in the hands of the state, but also the monsters of mass incarceration and the criminalization of entire populations that “gun control” has helped create.