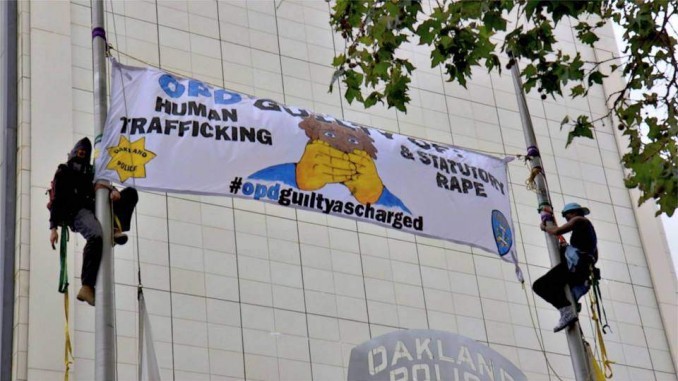 Oakland, Calif. — Seven Black men were killed at the hands of the Oakland Police Department in 2015, but it took a sex crime scandal to finally expose that the OPD is rotten to its core. In a span of nine days from June 9 to 17, three Oakland police chiefs have been fired. Now department commanders are reporting to City Administrator Sabrina Landreth.

The scandal stretches across a number of Bay Area police departments and even to an investigator in the Alameda County district attorney’s office. OPD is still under federal receivership from an abuse-of-power scandal, the Rider Case, in 2003.

Oakland’s Anti Police-Terror Project (APTP) has used the scandal to demand “systems of safety that do not rely on militarized police departments and blanket incarceration of America’s most vulnerable populations.” In a dramatic action in front of OPD headquarters on June 17, climbers unfurled a banner across OPD’s flag poles that stated “OPD Guilty of Human Trafficking & Statutory Rape #OPDGuiltyasCharged.” The protestors cordoned off the front plaza with crime scene tape.

This story cracked open on May 12 when the East Bay Express linked reports of three officers on leave to Officer Brendan O’Brien, who committed statutory rape of an underage sex worker last year before committing suicide in September.

The scandal came to the attention of U.S. District Judge Thelton Henderson, the presiding judge over the settlement that put OPD in federal receivership. He had issued an order on March 23 citing “irregularities” and “violations” of procedures by Oakland police detectives in charge of the sexual-misconduct inquiry, questioning the department’s commitment to accountability and reform. Henderson directed court-appointed independent monitor Robert Warshaw to take over the sexual-misconduct case.

All this culminated in the firing of OPD Chief Sean Whent on June 9. According to interviews with the victim, elected officials and sources close to OPD, in addition to documents obtained by the East Bay Express, at least 14 Oakland Police officers, three Richmond Police officers and four Alameda County Sheriff’s deputies had had sex with the teen. Three OPD officers had sex with her when she was underage, leaking confidential information about undercover stings to her as well.

The young woman told reporters she slept with the cops for protection. Multiple department supervisors knew about her abuse by Oakland police, yet did not report it.

Sexism and racism covered up

Alameda County District Attorney Nancy O’Malley issued a statement on June 15 that a district attorney inspector in the case has been placed on administrative leave. O’Malley, who has never prosecuted a single killer cop, declined to name the inspector. However, the young woman claims to have had an online friendship when she was underage with District Attorney Inspector Rick Orozco, who at the time was an OPD captain.

The East Bay Express says Whent was forced out by Warshaw, who is responsible for overseeing OPD’s progress with its 13-year-old federal reforms and who had hand-selected Whent to run the department in 2014. Whent’s spouse knew of the young woman’s relationship with officer O’Brien as far back as June 2015, according to multiple sources. In March, Warshaw discovered Whent knew about O’Brien’s relationship with the underage teen.

On June 15, Mayor Libby Schaaf announced that she dismissed Interim Chief Ben Fairow, who is also the Bay Area Rapid Transit deputy police chief, after less than six days on the job. Multiple sources told the Bay Area News Group that Fairow had had inappropriate sexual contact with another employee during his earlier stint with OPD.

On June 16, East Bay Express reported that an OPD homicide cop was under investigation for having his “girlfriend” write his homicide reports and post evidence from one of his confidential investigations online.

The next day Schaaf announced that she had dismissed Interim Chief Paul Figueroa after less than two days in office. Figueroa will go on leave, then return to a demoted position as captain. Schaaf also announced an investigation into racist texts, resulting in one officer being placed on leave. Schaaf stated that she would not name another interim chief while conducting a national search for a new chief. Instead she announced that command staff were to report to City Administrator Landreth. “I feel this is an appropriate time to place civilian leadership over the department,” said Schaaf.

The APTP is holding a press conference on June 21 at OPD headquarters to press the following demands: