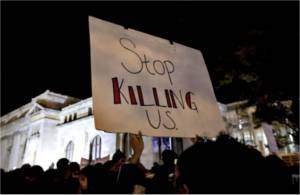 In the wake of the Orlando, Fla., massacre, LGBTQ people and people of color are calling out, again: “Stop killing us!”

Over 100 people were shot down on June 12 and 49 died. Almost every one was a person of color, with 90 percent Latino/a or of Latino/a descent. Twenty-three of the dead were from Puerto Rico, and three were undocumented immigrant workers from Latin America. More than half were under 30 years old.

The bullets were fired from an MCX semi-automatic rifle designed by gun manufacturer Sig Sauer. Smith and Wesson describes this type of weapon as fitting the needs of “global military, law enforcement, and security personnel.”

In response to the massacre, an agonized cry for gun control has risen in the U.S., and understandably so. On social media, people tell of friends afraid to gather at their local LGBTQ bar or at June Pride events, of young children who fear when their LGBTQ parents leave the house because “You might get killed.” There are heartbreaking comments by friends, lovers, parents and siblings who have lost loved ones in repeated mass shootings, from Orlando to the nine African-American churchgoers killed in Charleston, S.C., only a year ago, and many other massacres. The U.S. has had more than a thousand mass shootings in the last three years.

Gun-control advocates are demanding that Congress reinstate a federal assault weapon ban that expired in 2004. More than a dozen gun control bills are pending in the U.S. Senate, but stand little chance of being enacted into law.

To understand why guns are so ­prevalent in the U.S., we have to look unflinchingly at the nature of the U.S. state and its relation to working and oppressed people. The U.S. was founded on the thieving seizure of lands of massacred Indigenous peoples; on white supremacy and enslavement of people of African descent; on the exploitation and wage slavery of working people; on the exploitation of women politically, economically and socially; on the forced imposition of heterosexual family structures; and on colonial and imperialist wars to feed power and profits to its ruling class.

The state and ‘bodies of armed men’

To maintain power rooted in these realities, the U.S. state, like all states based on class rule, must rely on “bodies of armed men” — a standing army, police, prisons and other “instruments of coercion.” V.I. Lenin, leader of the Russian Revolution, explained the true nature of this “social order” in his classic work, “The State and ­Revolution.”

History affords many examples of what this looks like. In the seizure of Indigenous lands and the establishment of slavery in the U.S. South, armed white settlers served as “instruments of coercion” for the new U.S. state. Recently, we have only to focus on the African-American community of Ferguson, Mo. In the summer of 2014, the small town was invaded by police and National Guard units with tanks and military-grade weapons, similar to those used in Orlando, simply because the community asserted its constitutional right to assemble to protest racist injustice.

In the context of state repression, “gun control” has historically meant disarming workers and oppressed people who need to defend themselves, their families or their homes against violence by the state or the owning class. With the end of Reconstruction and the rise of the Ku Klux Klan and armed white vigilantism in the 1870s, former slave owners mobilized these “instruments of coercion” to disarm freed people of African descent and force them back into peonage.

More recently in New York City, infamous “stop and frisk” laws were implemented ostensibly to make the city “safer.” Between 2002 and 2015, cops terrorized over 5 million people, almost 90 percent of whom were Black or Latino/a. This occurred during intensifying gentrification, with billions in real estate profits to be gained by removing rent controls from working-class housing.

Of course, practical measures should be taken in response to the scourge of gun deaths. For instance, an increase in funding for beleaguered mental health programs is much needed, as they continue to lose resources under “austerity” budgets.

But a look at the disproportionate number of deaths of people of color, people with disabilities and genderqueer people at the hands of the police, as highlighted by the Black Lives Matter movement, belies the wisdom of relying on the U.S. state to safeguard our lives and the lives of other workers and oppressed people. We can also see how the endless U.S. wars normalize both the scapegoating of targeted people and the placement of military weapons into the hands of the police as well as right-wing, neofascist forces.

An Associated Press headline recently gloated that after Orlando, “gay leaders” must turn for protection to the very police who had raided and beat LGBTQ people at the Stonewall and Compton rebellions, sparking the modern LGBTQ liberation movement.

Not so. Instead, we can turn to the many examples of mutual help and self-defense to strengthen solidarity between all of us who, as the poet Audre Lorde said, “were never meant to survive” under the grinding heel of capitalism.

We can remember Mae Mallory and Rob Williams, who fought white supremacy with organized armed self-defense in the African-American community in Monroe, N.C., in the 1960s.

We can remember what happened in Buffalo, N.Y., after the murder of Dr. Bernard Slepian. The 1999 Rainbow Peacekeepers formed a human chain during the day to protect the local women’s clinic from anti-abortion blockaders, and guarded local gay bars at night from threatened attack by the same right-wing forces.

We can learn from the historic 2006 general strike launched by Latino/a ­workers throughout the U.S., which called on immigrants and allies to struggle together against racist scapegoating and ­deportation.

We can emulate the solidarity in the message from North Carolina Muslims to the LGBTQ community immediately after Orlando: “Their grief is our grief.” In February 2015, three young Muslim students were killed in Chapel Hill, N.C., by an anti-Islamic neighbor. (wral.com)

We can listen to the LGBTQ community and allies in Pensacola, Fla., who, before Orlando, met the Christian right wing’s violent harassment outside their local Emerald City bar with a live band and militant, vociferous opposition, ultimately clearing the haters out. Local organizer Devon C. said on Facebook: “This is how we collectively rise up and overthrow those who seek to oppress us.”