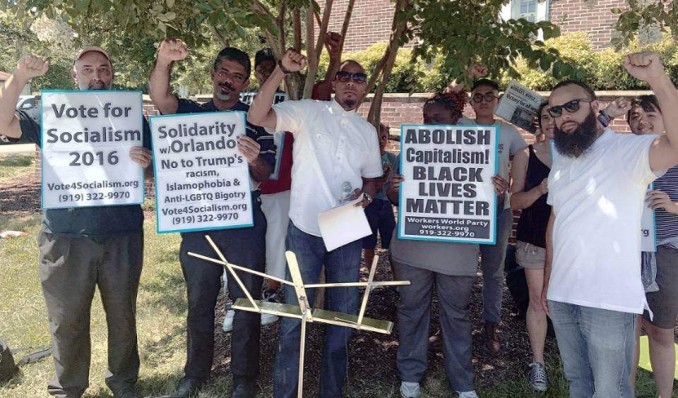 Some of the participants in WWP press conference, June 14. Lamont Lilly, candidate for Vice-President, center.

“Prisoners cannot vote and they are dying in our local jails. Youth cannot vote and our schools are being underfunded. Undocumented workers cannot vote and the border walls just keep getting higher and U.S. foreign policy continues to displace the masses,” said Durham, N.C.,-based campaign coordinator L.T. Pham at a June 14 press conference. Pham went on to explain that Workers World Party is running an election campaign in the spirit of fighting back against the ills of capitalism.

North Carolina’s oppressive election laws require 100,000 verified signatures to get on the ballot. The WWP Durham branch is launching a campaign for official write-in status in North Carolina.

Police arrested four of the hundreds of protesters greeting Donald Trump in Greensboro, N.C., on June 14. The WWP Durham branch joined the protests to shut Trump down. Last November, WWP was on the front lines of organizing the protest that shut Trump down in Raleigh.

The WWP branch supports the lesbian, gay, bisexual, transgender and queer peoples’ organizing and uprisings around the state against House Bill 2 and all those targeted by violence, most recently in Orlando, Fla.

WWP also protests the racist police killings of Akiel Denkins in Raleigh, Jesus Huerta and La’Vante Biggs in Durham and recently Deriante Miller in Kinston, N.C. The WWP campaign demands the disarmament of the police, Immigrations and Customs Enforcement, and the Pentagon. WWP will also continue to join protests challenging oppressive conditions in the Durham County jail.

The campaign has congratulated Durham city workers, whose union picketed City Hall for 10 weeks, for winning a minimum wage of $15 per hour. WWP supports fast food and all low-wage workers fighting for $15 per hour and union rights.

WWP vice-presidential candidate Lamont Lilly, a North Carolina Central University graduate, told the crowd at the news conference: “We’ve been in the streets in Baltimore, in Ferguson. We’ve been in Oakland. We’ve been in Cleveland organizing with the people, in communities that the bourgeois media do not go to. Those are the areas we are in mobilizing and teaching our people.”

Lilly discussed WWP’s 10-point political program of the “Vote Socialism 2016” campaign, saying, “We want an end to the war on Black people and we support the demands of the Black Lives Matter movement, including jailing the killer cops, abolishing the police and the historic necessity of reparations for Black people here in the U.S. and worldwide.” Lilly said the oppressed people have to rise up, as they did in Baltimore, Ferguson, Mo., and Durham.

The campaign fights for revolutionary socialism, a system of people’s power where workers and oppressed peoples, not banks and corporations, own and control everything, and where the needs of the 99%, not the profits of the 1%, are prioritized. This means fully funding public education, housing, food, water, clothing, health care and childcare for all. We salute the “March for More” starting June 14 to demand the state increase funding for public education. We also support the fight to stop House Bill 873, which would underfund Historically Black universities.

Other local activists, such as Abdul Burnette, a Bojangles worker and leader in the “Raise Up for $15” per hour and union rights campaign, expressed solidarity with the Moorehead-Lilly campaign.

Loan Tran stated: “Workers World Party organized press conferences today across the country in cities like here in Durham, but also in New York City, Baltimore, Philadelphia, Los Angeles and Boston. The U.S. is at a political crossroads with the presidential election looming over the heads of workers and oppressed people, and the conditions under the capitalist system only continuing to get worse. We come together to express solidarity with all struggles to fight racism, sexism, homophobia, transphobia, Islamophobia, anti-immigrant bigotry and much more.”

“There was a big massacre over the weekend in Orlando and we saw one of the worst attacks in this country. What we are witnessing here in the form of Islamophobia and homophobia is a crisis of capitalism,” stated Manzoor Cheema from Muslims for Social Justice, based in Raleigh, N.C.  “The rise of these victimizations are [caused by] the increasing disparities of the rich and poor. One of the local concrete examples is the law House Bill 2, which makes LGBT and trans communities into second class citizens” and also “denies municipalities the ability to pass minimum wage ordinances for their contractors.

“We have to be careful in the wake of the Orlando tragedy,” Cheema added, “because the perpetrator is portrayed as a Muslim person. This is exactly what the powerful forces want to do. They want to pit one oppressed community against another.”