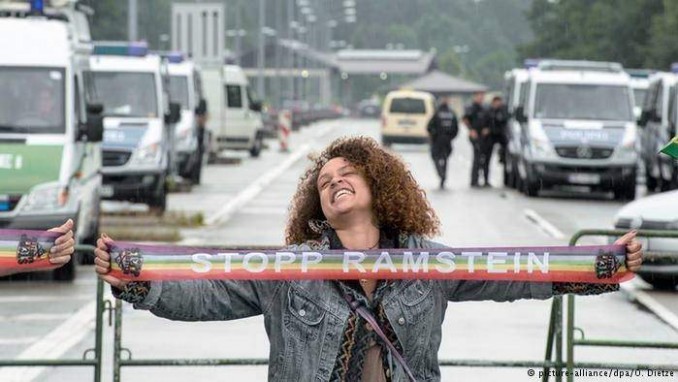 Between 5,000 and 7,000 demonstrators formed a 5.5-mile human chain around the massive U.S. Air Force Base at Ramstein in rural southwestern Germany on a rainy June 11 to protest its role in wars worldwide, especially involving the U.S. drone assassination program.

What is Ramstein? “With its staggering scope and scale, Ramstein … serves not only as the headquarters of the U.S. Air Force in Europe and a NATO installation but also as a gateway to American military operations around the globe,” wrote Business Insider on Sept. 18, 2014.

The article says the base transmits information from operators in the United States — such as GIs at Hancock AFB near Syracuse, N.Y. — to pilotless drone aircraft in such places as Iraq, Afghanistan, Pakistan, Yemen and Syria, where thousands have been killed by drone attacks.

Last fall, an unnamed whistleblower leaked classified Department of Defense documents revealing that nearly 90 percent of people killed by drones in one five-month period were noncombatants who were merely close to intended “targets.” (The Intercept, Oct. 15)

The German-based “Stop Ramstein – No Drone War” anti-war coalition said in a statement signed by dozens of organizations and individuals that Ramstein “plays a pivotal role for preparing and executing wars of aggression violating international law. Most of the lethal missions of U.S. combat drones, e.g., in Iraq, Afghanistan, Pakistan, Yemen, Syria, and Africa, are conducted via Ramstein’s satellite relay station. …

“In Ramstein itself, about 650 personnel continuously analyze, update and pass on data from the surveillance of alleged targets. Without Ramstein, the whole drone war would be obstructed decisively and might come to an end.”

The statement makes the point that Ramstein is also a key player in “looming U.S. interventionist wars, including at the borders of Russia.” (codepink-in-germany.org)

This June 7 the largest European war exercise planned for this year, known as Anaconda, opened in Poland. This exercise is a provocation aimed at Russia. Anaconda involves 25,000 troops from 19 NATO countries and six other “partners,” including Georgia and Ukraine from the former Soviet Union, Kosovo and Macedonia from the former Yugoslavia, Sweden and Finland. They follow U.S. command.

The June 11 demonstration raised the following demands addressed to the German parliament and government:

• Ban the U.S. by law from using Ramstein as the basis of their drone wars.

• Renounce the purchase of combat drones for the Bundeswehr (German armed forces).

• Proscribe the acquisition of combat drones for the military.

• End illegal spying by the U.S. National Security Agency, in cooperation with the German intelligence agency BND, for which Ramstein is a focal point.

Elsa Rassbach of the “Stop ­Ramstein – No Drone War” coalition of Code Pink Germany supplied sources for this article.