Prisoners at the Marquette Branch Prison in Michigan’s Upper Peninsula held a mass boycott of the facility’s cafeteria on May 24. More than 700 of the 1,100 low-security inmates united in this action to protest the awful food provided by Trinity Corporation. Immediately following this nonviolent action, prison officials locked down the entire facility for 24 hours.

Similar actions against bad food had occurred the previous months at the Kinross, Chippewa and Cotton Correctional facilities, all located in Michigan.

The Michigan Department of Corrections cancelled its contract with Aramark Foods last fall, replacing it with Trinity because of numerous concerns. Prior to December 2013, prison food services were provided by state workers. Trinity’s performance, as shown by the numerous protests, may even be worse.

Political prisoner the Rev. Edward Pinkney was able to call his supporters after the lockdown ended on May 25. He told them that there are “maggots and rat feces in the food. It’s disgusting food and the quantities are inadequate. We believe that the Department of Corrections is getting kickbacks from Trinity.” ­(bhbanco.org)

Rev. Pinkney has vowed not to eat prison food while at the prison. He says he will subsist on quarterly packages of food from a vendor supplying prisoners and paid for by his spouse.

Since the May 11 appeal on his 2014 conviction has been “held in abeyance” until the Michigan Supreme Court rules on a different case, Pinkney faces a likely minimum of one more year before being eligible for parole. The Michigan Court of Appeals denied him bail again in late May.

On June 8, Marquette-area ABC TV10 News broadcast a story about the May 24 food protest. Rev. Pinkney was able to call in to the station for a short powerful interview. (abc10up.com) Prison officials retaliated by barring Rev. Pinkney from contact with the media. 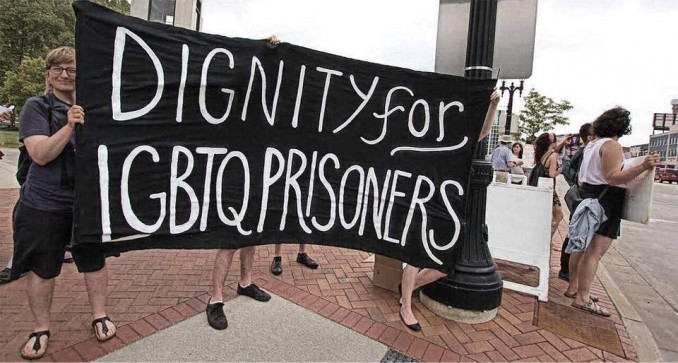 A protest supporting LGBTQ prisoners was held outside MDOC headquarters in Lansing on May 26.

In other prison news, supporters of gay and trans prisoners at the Cotton Correctional Facility in Jackson have been directing protests to MDOC Director Heidi Washington for mistreatment of LGBTQ prisoners. Seven prisoners filed grievances under the federal Prisoner Rape Elimination Act, citing years of harassment by guards and administration inaction. Retaliation against these prisoners soon followed, including three transfers and disciplinary action.