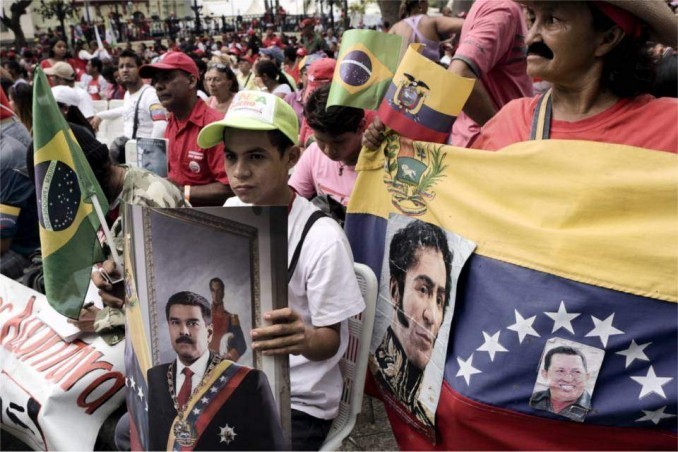 A campaign against the Bolivarian Republic of Venezuela by Secretary General Luis Almagro of the Organization of American States was pushed back on June 1. A special meeting of the OAS Permanent Council declared its “respect for the nonintervention principle in the domestic affairs of the States; and that every State has the right to choose, without external interference, its political, economic, and social system and to organize itself in the best way suited to it,” and “support for all efforts of understanding, dialogue and the constitutional procedures.”

This last point supports the initiative for dialogue facilitated by the Union of South American Nations (UNASUR), although it does not mention the organization by name. More importantly, it recognizes the legitimacy of the Bolivarian Constitution, a target of the anti-Chavista right wing.

The Cuban Ministry of Foreign Relations in a June 2 statement supported Venezuela’s “difficult but victorious diplomatic battle against the interventionist plans of imperialism and oligarchies.”

The statement added: “All appearances indicated that a triumphal parade was at hand, but the Secretary General, OAS bureaucrats and their ghastly mentors forgot that we do not live in 1962 when with shameful complicity the organization tried and convicted socialist Cuba. …

“The Ministry of Foreign Relations considers what has now occurred in Washington as new evidence that Our America has changed, although the OAS continues to be an unreformable instrument of U.S. domination over the peoples of Latin America and the Caribbean, a reminder of what President Raul Castro Ruz said … when paraphrasing Jose Marti, he asserted, “Before Cuba returns to the OAS, the northern seas will unite with the southern seas, and a snake will be born from the egg of an eagle.” (minrex.gob.cu)

The OAS has formally rescinded the suspension of revolutionary Cuba. Yet Cuba was finally invited to attend the OAS-sponsored April 2015 Summit of the Americas in Panama only after the countries of Latin America refused to have a summit without Cuba.

In 2011, 33 of the 35 countries in the Western Hemisphere united in the Community of Latin American and Caribbean States, omitting imperialist U.S. and Canada. This development followed the defeat of the U.S.-inspired Free Trade Area of the Americas and the birth of the solidarity trading bloc, the Bolivarian Alliance for the Peoples of Our America — Peoples’ Trade Treaty, as well as other continental self-governing bodies like UNASUR and PetroCaribe.

Conspiracy vs. Venezuela made in USA

The draft declaration attacking Bolivarian Venezuela had been submitted by the delegation of Argentina, with co-sponsorship of the U.S., Honduras, Peru, Mexico and Bahamas. But Washington started the attack with its Venezuela Defense of Human Rights and Civil Society Act, which went into effect on Dec. 18, 2014 — the day after the U.S. released the last three members of the Cuban 5 and presidents Raul Castro and Barack Obama committed to normalizing relations between the U.S. and Cuba.

On March 8, 2015, President Barack Obama declared Venezuela “an unusual and extraordinary threat to the national security and foreign policy of the United States.”

The OAS secretary general, allied with the Venezuelan oligarchy, sought to line up another weapon against Bolivarian Venezuela to justify imperialist intervention — including military intervention.

Journalist Berta Joubert-Ceci described the warm-up for the special meeting of the OAS Permanent Council: “To fulfill his role serving U.S. interests, Secretary General of the Organization of American States Luis Almagro announced on May 13 from Miami that the OAS should apply its Democratic Charter against Venezuela. For the OAS to arrive at a decision, Almagro requested that the National Assembly of Venezuela report on the political situation. Almagro made the announcement at the two-day conference called the ‘Concordia Summit,’ at which 200 rightist representatives of public and private sectors gathered to analyze the situation on the continent.

“It’s enough to see the names of the participants to guess its agenda: Luis Alberto Moreno, president of the Inter-American Development Bank, and former presidents and prime ministers, including Luis Alberto Lacalle of Uruguay, Sebastián Piñera of Chile, Jorge Quiroga of Bolivia, Alvaro Uribe of Colombia and José María Aznar of Spain.

“Incidentally, it was at this summit where Uribe called for foreign military intervention to help the Venezuelan opposition.” (workers.org, May 24)

On Feb. 15, Venezuela objected to Almagro posting on the OAS website a Washington Post opinion piece by editorial writer Jackson Diehl, “A revitalized voice for the Americas.” Diehl lauds Almagro for intervening in the Venezuelan parliamentary elections with an open letter attacking the Venezuelan government. “He’s also intervened in Haiti’s election crisis, a corruption scandal in Guatemala and a border dispute between Colombia and Venezuela,” Diehl writes.

Venezuela says of Diehl’s right-wing history: “On various occasions he has expressed frustration that the U.S. government has not dealt more aggressively with the Venezuelan government (despite the fact that the Bush administration endorsed the 2002 coup). In August 2004, Diehl stated that ‘It is virtually unprecedented for Washington to do so little about such a considerable Latin America menace; Venezuela, after all, is of greater economic and strategic importance to the United States than were El Salvador and Nicaragua in the 80s’ [where the U.S. government supported death squads and CIA-trained insurgents].” (alba-tcp.org)

At its close on June 4, the Seventh Association of Caribbean States Summit held in Havana presented a special communiqué in support of the Bolivarian government of Venezuela.

A May 31 protest letter to Almagro signed by at least 81 concerned organizations and individuals from the U.S. and Canada was hand-delivered to the OAS headquarters in Washington, D.C., the site of the special meeting.

The signers said they were “deeply concerned by your intervention in Venezuela on behalf of the opposition United Democratic Roundtable (MUD) and its allies in Washington as well as your relentless attacks on the administration of President Nicolás Maduro.

“Far from helping Venezuela move toward a peaceful and cooperative resolution of these challenges, your intercessions over the past year have served to exacerbate the conflict. We urge you to avoid further partisanship and play a more constructive and impartial role in promoting peace and dialogue. For an example of a such an approach one only need look to the mediation efforts of the Union of South American Nations (UNASUR), which has the backing of UN Secretary-General Ban ki-Moon.

“We are particularly concerned about your strong support for the MUD’s efforts to pressure the OAS into invoking the Inter-American Democratic Charter against the Maduro government; your attempts to cast doubt on the democratic legitimacy of last December’s legislative elections during the weeks preceding the vote; your intense lobbying in favor of the highly controversial amnesty bill; the selective nature of your expressions of indignation over violations of human rights; and your failure to denounce Washington’s increasingly belligerent posture towards Caracas.”

Read the full letter at infoamericas.info.