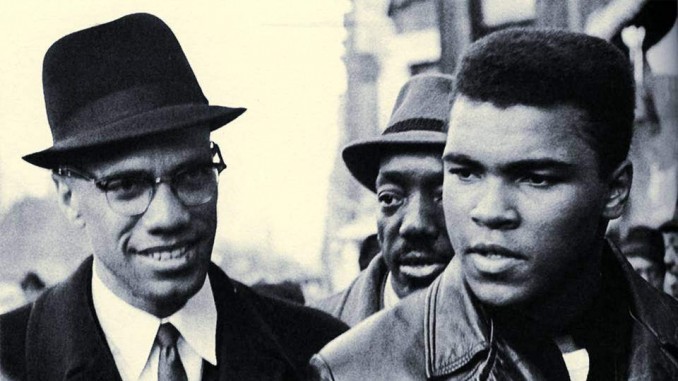 The champ has passed. “The Greatest” has gone. Muhammad Ali is dead. It was a foregone conclusion that this day would come — “the day” when everything a person has been ends with one final exhalation. It comes for everyone.

When it was announced that Muhammad Ali was hospitalized yet again, this time with a respiratory illness, it seemed, sadly, that it was only a matter of time. And it was. Surrounded by family, he passed quietly of septic shock on June 3.

Since his death, Muhammad Ali has been lauded in major bourgeois media, in minor sources, in print and in every form of media around the world. He is remembered by people too young to have seen him box and by revolutionaries and reactionaries.  Everyone has something to say about Muhammad Ali.

Who was Muhammad Ali? This can be confusing. People are complex. History is too; it is dialectical. So the ideas and beliefs of an individual, like society as a whole, are affected by the real world around us. Changes are due to objective and subjective factors.

A simpler way to say it is that the political tumult of the 1960s era that produced Muhammad Ali was no more by the 1980s. So the Muhammad Ali who supported Ronald Reagan was a different Ali. The revolutionary fervor around the world had quieted, and the Black Liberation struggle that he championed had been violently repressed by the police, the FBI, the military and the courts.

Years of reaction followed, with the destruction of the industrial heartland due to high technology, and the capitalists’ drive to find higher rates of exploitation in the Third World, coupled with an assault on workers and oppressed people in the United States..

Even then, one cannot say that Muhammad Ali’s unfortunate support for Reagan or other right-wing politicians defined his post-boxing life. The establishment that embraces him today portrays him as just an icon, a person with nebulous politics, who was loved and respected by all, who could shake hands with Fidel Castro or Nelson Mandela and then sit down with Bill Clinton in the White House.

The people who eulogize Muhammad Ali today would lambaste the Ali whom we hold close. They wanted to silence him at the height of his physical prowess and political significance.

A symbol for the oppressed

Who was Muhammad Ali? In three words, he was beautiful, brilliant and great. He was our Blackness, our expression through and through — and yet, still more. He was a symbol for all  despised and oppressed people who yearn and struggle for more.  He was our “religion” — what Karl Marx called “the sigh of the oppressed creature, the heart of a heartless world, and the soul of soulless conditions.” He was everything that we were and are — outfront and defiant for all to see how magnificent and brave we are and must continue to be.

The dialogue will continue about Ali’s political importance. But what made him the Greatest must be reclaimed.

It was not only boxing that made Ali great and the champ. His skill as a boxer is part of it. Some might sum up boxing as he once did, “Boxing is a lot of white men watching two Black men beat each other up.” That description brings to mind the first chapter in Ralph Ellison’s book, “Invisible Man,” sometimes presented as a short story called “Battle Royal.”

It would be difficult to argue against that perception. Most fighters are from the oppressed world. Consequently, so are most fans, except those who can afford to see the biggest fights and those who profit the most are white.

It is the hurt game, a brutal contest. It is, perhaps, a contradiction for this writer, a revolutionary, to enjoy.

In the pantheon of boxers

Boxing is a sport of science and skill. It is a chess match that requires a great deal of thinking and certain physical attributes.  Ali possessed it all. It is difficult to rank athletes from different eras because scientific advances have made training more efficient and helped increase the performance level of athletes.

Some scribes rank Ali at the top of the pantheon of boxers; some rank him in the top five. Often these rankings are culled together by people who have never been punched in the face. But it would not be sacrilegious to rank Sugar Ray Robinson as history’s greatest fighter and Henry Armstrong second, with Ali third, or maybe lower, but definitely in the top six. Robinson and Armstrong were tremendous athletes and fighters who accomplished amazing feats. Armstrong held belts from three different weight classes at the same time.

Ali’s abilities and accomplishments put him in a unique class. He was the fastest heavyweight the world had ever seen, in terms of hand and foot speed. But it was his hands and the spectacle of the dizzying blur of combinations he would throw that held many people in awe. He was also light on his feet for someone of his size. He could move backwards and laterally while popping a jab.  He could set his feet, uncork a right hand and then dance away before his opponent could respond. His balance was like a dancer’s, and his punches had power from both the torque generated and the leverage he was able to get.

If someone were looking to create another Muhammad Ali, that person would need to take the hand, foot speed and balance of an early Floyd Mayweather; the reflexes of a prime Roy Jones Jr.; the combination of speed and power of Shane Mosley; the clowning of Emanuel Augustus, and then put them all on a 6-foot- 3-inch frame. Then add the buttery voice of Sam Cooke, the skill with vernacular of Michael Eric Dyson and the sing-song quality of the delivery of rapper Method Man — and you get Muhammad Ali.

Ali made the violence of boxing almost beautiful to watch. When his reflexes dulled and his feet lost their speed, it was his ring intelligence and his superior will that defeated opponents. He faced some of the most efficient punchers in heavyweight history — Liston, Shavers, Foreman, Ron Lyle, Joe Frazier — and he beat them all.

Who could forget Ali’s fight against George Foreman and the images of Ali surrounded by throngs in the Democratic Republic of Congo? Foreman was the establishment’s pick, a powerful fighter with a more fearsome reputation than Sonny Liston. Ali took Foreman’s every punch and taunted his foe, wearing him down before coming alive to knock him out in the eighth round.  It was a demonstration of his in-ring greatness, as he suggested it would be.

The fighter is part of the “champ,” just a piece of what made Ali great. That part can’t be separated from the whole; without it he would not have had the world’s stage or drawn such ire from bourgeois politicians and their media mouthpieces.

What made him the “People’s Champ” and greater than even his in-ring exploits is what Ali did with his fame and allure. When he joined the Nation of Islam in 1964, it made more of a political statement than it would today, though it remains one.

Ali said then: “I am America. I am the part you won’t recognize. But get used to me. Black, confident, cocky; my name, not yours; my religion, not yours; my goals, my own; get used to me.”  His statement symbolized the period of revolution against Western imperialism and white supremacy, as well as the Black Liberation struggle in the U.S.

Ali stood to lose everything he fought for, but that threat did now cow him. He said what the Black masses felt. At a time of American apartheid, when Civil Rights leaders were being jailed, beaten and assassinated, he stood up as a Black nationalist and taunted the dominant nationality unceasingly. He couldn’t be controlled or ignored.

When Ali was drafted into the Army, he could have stated that he was a conscientious objector solely on religious grounds. But he insisted, “No Viet Cong never called me n—-r.”

Ali’s further elaboration set the world afire: “Why should they ask me to put on a uniform and go ten thousand miles from home and drop bombs and bullets on brown people in Vietnam while so-called Negro people in Louisville are treated like dogs and denied simple human rights?”

His internationalist sentiment exposed the great hypocrisy of why the U.S. claimed it was in Southeast Asia. Even if it was not understood that the U.S. had material interests and ideological reasons for waging war against the people of Southeast Asia, Ali’s refusal and explanations hit home. It was like Langston Hughes’ character Jesse B. Semple, an everyman, learning Internationalism and Anti-Racism 101.

Ali explained, “I ain’t draft dodging. I ain’t burning no flag. I ain’t running to Canada. I’m staying right here. You want to send me to jail? Fine, you go right ahead. I’ve been in jail for 400 years. I could be there for four or five more, but I ain’t going no 10,000 miles to help murder and kill other poor people. If I want to die, I’ll die right here, right now, fightin’ you, if I want to die. You my enemy, not no Chinese, no Vietcong, no Japanese. You my opposer when I want freedom. You my opposer when I want justice. You my opposer when I want equality. Want me to go somewhere and fight for you? You won’t even stand up for me right here in America, for my rights and my religious beliefs. You won’t even stand up for my rights here at home.”

This stance helped to unify the sentiments of Black people across the country and usher in further militancy in the anti-war movement and the Black struggle. Jim Brown, Kareem Abdul-Jabbar, Bill Russell, Willie Davis, Curtis Stokes and others, athletes at the prime of their careers, made their objections to the war public in a unified way.

Ali’s stance resulted in the loss of his license to fight, his championship belts, money — and his best fighting years. He knew of this possibility and remained resolute. When he returned to the ring, his physical talents were somewhat diminished.  Reflexes and speed are the first things a fighter loses.

This is the Ali that the world — outside of mainstream bourgeois circles — remembers. It is why he could travel anywhere in the world — to Cuba, Iraq, Libya, the Congo, Philippines and elsewhere — and people by the tens of thousands would gather and wait to see him. This is why he was respected by revolutionaries and anti-imperialists.

It is also why a reviled, bourgeois, reactionary demagogue like Donald Trump or any other politician might speak glowingly of him today, but would have hated him 50 years ago. Throw a rock in any direction, and you might hit someone who speaks of Ali as if they are memorializing the same man the oppressed do. They lie.

He was The Greatest. We will remember him as we fight on. Ali presente! We will win.