A short primer on capitalism:

1. The current crisis is a crisis of capitalism. It is not a crisis of socialism or any other economic system. Only capitalism has this kind of crisis that leads to people losing their jobs, their homes and even the food on their table. 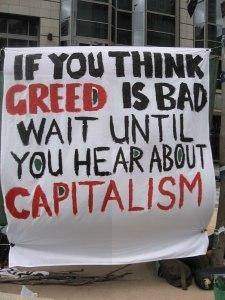 2. While greedy individuals and corporations are involved, their greed and corruption did not cause the crisis. Capitalist crises are not caused by bad individuals or evil corporations. It is only during a crisis that these bad sorts are exposed, in the scramble to find blame. Why don’t the media blame capitalism? They should, because it is capitalism that causes these economic crises. Crisis is built into the capitalist system.

3. The driving force of capitalism is profits. Profits rule and capitalists must constantly expand their profits or they fail. Everything is produced for profit, not for need. So a crisis is reached when profits fall below the rate demanded by the capitalists and the bankers (finance capitalists).

4. A capitalist crisis is the result of an economic system. This is not a natural force like a flood or a tornado. It can be controlled and even reversed. But not through capitalist measures. Only by replacing capitalism with ­socialism can this crisis be truly ended.

5. That can be done, but not easily. Not overnight. But throwing out ­capitalism is the only solution possible. Let’s do it!