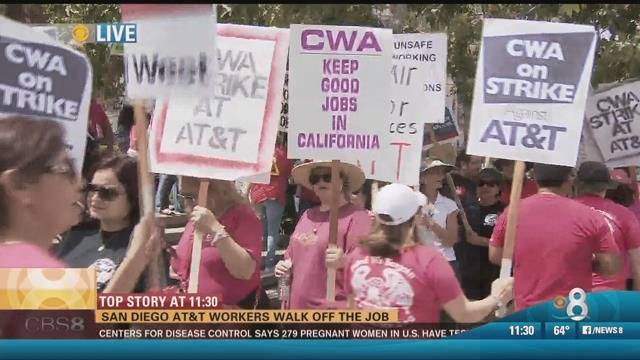 Communications Workers Local 9509, representing some 1,700 AT&T workers in San Diego, walked off the job May 19. The union had requested information about how the company monitors employees after a civil court judge ordered AT&T to pay $1 million to a wrongfully terminated call center worker. “The documents requested are necessary to protect our members from the constant abuse of the monitoring system by management,” explained CWA Executive Vice President Tosha Broadnax. “We have a contractual right to request and receive these reports.” (cbs8.com, May 20)

In response to AT&T’s repeated refusal to comply, the workers, who had been without a contract since April, called a grievance strike. They picketed call centers throughout San Diego, forcing AT&T to reroute incoming calls for six days. No doubt fearful of growing solidarity with the East Coast Verizon strike in its sixth week, AT&T caved, releasing reports May 25. (laborpress.org, May 29) CWA District 9 Vice President Thomas Runnion recognized, in an open letter, “the amazing show of solidarity that we have seen demonstrated by Local 9509. The six day strike was so strong — 1,700 members committed in taking a stand together and not wavering.” (local9509.net, May 25)

Ever since 2007, workers in North Carolina fields that grow tobacco for Reynolds American have confronted the company with reports of low wages and miserable working and living conditions on the company’s contract farms. But this year, the company’s 2015 audit report, issued the day before its annual shareholders’ meeting in Winston Salem, confirmed what the Farm Labor Organizing Committee has been saying all along. The audit found cases of children under 13 working in the fields, minors below 16 illegally performing hazardous work, serious safety violations in tobacco barns and inadequate reporting of workplace accidents. Interviews with workers also uncovered wage violations, documenting that 25 percent of growers did not provide legally required documentation about wage rates, transportation and housing.

While hundreds of workers and supporters picketed in the rain, 40 farmworkers and FLOC supporters went inside the meeting. For the first time, Reynolds executives and shareholders had to listen to testimonies of 10 child farmworkers, whom they had previously claimed did not exist. After one youth asked Reynolds to sign an agreement with FLOC guaranteeing a living wage so children don’t have to help support their families, his question was met with deadly silence. However, FLOC President Francisco Velasquez acknowledged that Reynolds’ audit and willingness to hear testimony showed FLOC’s persistent pressure. He said the report by Reynold’s CEO Susan Cameron “signaled a seismic shift in the company’s public response to our concerns.”

Following the meeting, the crowd marched in a sea of red FLOC flags to a park to hear farmworkers testify about such things as the need for a grievance procedure to remedy complaints. FLOC thanked supporters from many labor and faith-based organizations and university groups, including Black Workers for Justice, Fight for $15 and the North Carolina AFL-CIO. (floc.com, May 5)

A May 24 lawsuit by New York Attorney General Eric T. Schneid­erman accused Domino’s Pizza of systematically underpaying workers statewide by hundreds of thousands of dollars. Domino’s franchise owners have increasingly come under fire in the state for wage violations, including a 2014 class action suit against one franchise that ended with a $1.3 million payout to workers. Meanwhile, the Domino’s corporation denies involvement in franchises’ day-to-day operations. (NewYorkTimes.com, May 25)

The suit, however, alleges the corporation requires franchisees to use payroll software it knew would miscalculate workers’ hours, resulting in illegally low wages paid at 78 percent of its restaurants and overtime payment withheld at 86 percent of them. Schneiderman asserted, “We’ve discovered that Domino’s headquarters was intensely involved in store operations and even caused many of these violations.” (ag.ny.gov, May 24)

Over $1 billion in stolen wages recovered nationwide by the U.S. Department of Labor since 2010 represents only a tiny fraction of the total amount bosses steal from workers every day. (NYTimes.com, May 25) If successful, this lawsuit may make it easier for more corporations to be held responsible for wage theft — though only the workers themselves, empowered through labor unions, can mount a decisive fight for fairness.