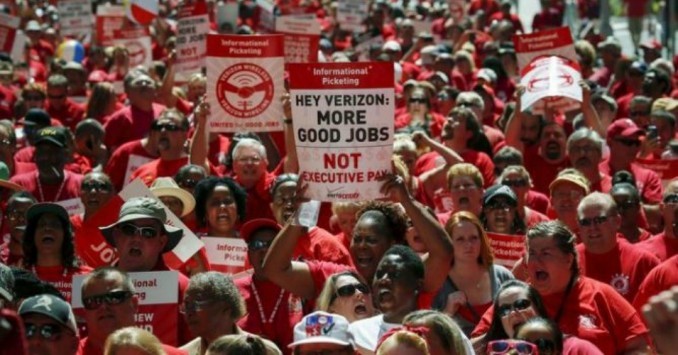 May 29 — On May 27, some 39,000 union workers at Verizon ended a strike that started on April 13, after almost 10 months of fruitless negotiations between two unions and the capitalist communication giant. Verizon made more than $39 billion in profit in the preceding three years.

Both the Communications Workers (CWA) and the International Electrical Workers (IBEW), who called the strike jointly, are saying that the 44-day strike has brought “huge gains” for the workforce as Verizon was forced to back off from nearly all of its concessionary demands.

The strike, which blanketed the East Coast from Massachusetts to Virginia, was one of the longest in recent U.S. labor history. The unions’ defiance of the transnational company in demanding their rights and defending their livelihoods has inspired workers around the country.

According to the CWA, Verizon dropped its most egregious demands and has committed to creating 1,300 new union positions at key call centers.

A small group of unionized wireless retail workers in New York and Massachusetts are now covered under the contract. This lays the foundation for organizing the large number of low-paid wireless workers. A significant percentage of workers at AT&T wireless retail stores are already under CWA collective bargaining agreements.

In exchange for agreeing to hire new call center workers, the company has greater flexibility in re-routing calls between specific locations. There are changes to the health care plans, which, according to the unions, will save Verizon money without compromising the quality of benefits.

Verizon workers are to return to their jobs on June 1, the date when the agreement will be discussed in full and the ratification vote will begin. It will be important, in the next few weeks, to listen to what the rank and file has to say about the new contract.

The strike ended with a tentative agreement after the intervention of U.S. Secretary of Labor Thomas Perez. The capitalist state was forced to intervene since this massive strike was taking place during the national election period and because both CWA and IBEW conducted a strike consistent with the militant determination of its members.

If this effective East Coast strike had dragged on, the poor service being delivered by scab technicians could have impacted the functioning of Wall Street or the federal government, including the Pentagon.

Significantly, the centerpiece of the negotiations was not wages but rather Verizon’s extortionary demands. These included (1) eliminating no-layoff protections for workers hired before 2003, unless “the unions agreed to other concessions;” (2) enabling Verizon to have free rein on outsourcing and offshoring its work; (3) no longer routing technicians to homes that have land lines and the right of Verizon to route those services to contractors for up to nine months; (4) the right to transfer workers up to 80 miles from their current work location for up to 60 days and to make Sunday part of the workweek; (5) the elimination of Article 8, which would eliminate seniority when “transfers become necessary;” (6) shifting the health care costs on to retirees; (7) cutting back on insurance disability for members injured on the job; and (8) ending profit sharing.

The strike was also called over Verizon’s attempts to eliminate the landline business — including forcing consumers to switch to more expensive wireless products — which would drastically reduce the amount of work for union technicians. Verizon has ignored its commitments to install FiOS (fiber optic service), prioritizing instead the expansion of faster-growing, more profitable divisions.

In early May, Verizon cut health benefits for strikers because they did not accept its wide-ranging demands. The unions fought back by picketing Verizon retail stores all over the country — not just in states affected by the strike.

The striking unions reached out to other unions to build solidarity. Steelworkers Local 8751, the Boston School Bus Drivers Union, for example, walked the picket line and attended every solidarity rally. The CWA supported Food and Commercial Workers Local 400 when it voted to strike Kroger’s southern supermarkets.

Offshoring jobs from call centers remains a big issue. Already, 5,000 call center jobs have been moved overseas, including to the Philippines. Some 13,000 strikers work at call centers.

A CWA delegation that went to the Philippines in May to investigate the outsourcing of call center jobs found out from workers there that they were being paid poverty wages of $1.78 an hour.  At Verizon’s headquarters at Alabang, near Manila, an armed security squad with automatic weapons confronted the delegation, which was traveling with a representative of UNI, a global labor federation, and KUM, a Filipino union.

In a letter signed by nine IBEW business agents, the union stated, “We have emerged from an ideological war with a corporation that believed that this was their opportunity to break the Union. … When faced with the elimination of our medical coverage the company thought that would be a crushing blow; believing we’d fall apart. When that didn’t happen the Verizon brass realized that they had severely underestimated our Solidarity.”