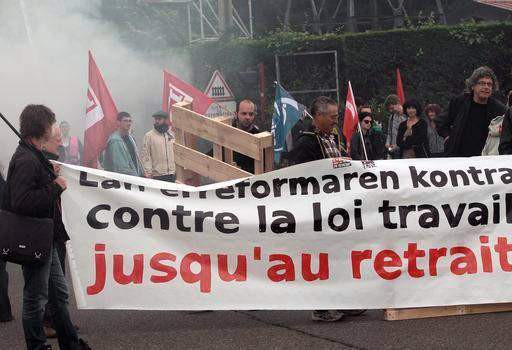 Throughout France, 300,000 people poured into the streets on May 26 demanding withdrawal of a reactionary labor law recently rammed through the National Assembly. The law significantly weakens protections French workers have won through decades of struggle.

This was the eighth day of nationally coordinated protests against the law within the last three months. The coalition of militant labor unions calling the demonstration included the General Confederation of Labor (CGT), Workers Force (FO), the Unitary Union Federation (FSU), Solidarity (Solidaire), the National Union of French Students (UNEF), the National High School Union (UNL) and the Independent and Democratic Federation of High Schools (FIDL).

The coalition has issued a call for a single, nationwide demonstration in Paris on June 14, the day the French Senate takes up the law.

The second largest French union, the French Democratic Confederation of Labor (CFDT), has broken with most of the French labor movement, and is supporting the anti-worker law and the government.

Besides protests in the street on May 26, there were numerous strikes, blockades and occupations. One group of marchers in Paris chanted: “All together, general strike! Who are the real hooligans? The state and the bosses.” (Telegram, May 26)

In France, labor unions are permitted to strike over political issues.

All eight French oil refineries were struck. Refinery workers, truck drivers, and dock and unemployed workers blockaded some fuel depots. Forty percent of France’s gas stations went dry, especially stations around Paris and those in the north and west.

Dockworkers went out and French television pointedly showed tankers waiting offshore because they couldn’t be unloaded.

Workers at France’s 19 nuclear power plants struck, which is their constitutional right. The workers did not shut down reactors or leave them unsafely attended. Instead, they dramatically reduced the power produced. The plants generate about 80 percent of French electricity.

Despite strikes, blockades, fuel shortages and protests disrupting the lives of millions, 65 to 72 percent of the French people support the protests and oppose the anti-worker law, according to the CGT.

The government had pushed the law through the National Assembly without a vote, using an obscure procedure in the French Constitution. Had there been a vote, the law would most likely have lost, since the Socialist Party now running the French state is split, and many of its own members might have voted against it. Though this party calls itself “socialist,” it firmly defends the interests of the French capitalists and is actively intervening in the Middle East and Africa in tandem with U.S. imperialism.

Jean Lassalle, from the small centrist party called MoDem, is a National Assembly member who did not get to vote on the new labor law because of the government’s no-vote maneuver. From the floor, Lassalle said: “I want to compliment the CGT for the actions which it has led. It takes a lot of courage to try to wake up a country which is asleep and living such a nightmare.” (Le Point, May 26)

In a May 23 statement, the World Federation of Trade Unions said: “The WFTU expresses … its full solidarity with all workers in France, who are fighting against the ‘labor’ law of the Social-Democratic government of François Hollande.

“The WFTU expresses its full and fraternal support to its affiliate, the FNIC-CGT, which strengthens the struggle of workers until the withdrawal of this unacceptable draft law.”

In the U.S., the Boston School Bus Drivers Union, United Steelworkers Local 8751, issued an April 28 statement: “We send our warmest internationalist greetings to the rising working class of France. We hail the upsurge of public and private sector unions, of unemployed, pensioners, students and immigrants, and of everyone who is under siege by the capitalist exploiters.”

The largest group of Local 8751 members are originally from Haiti, home of a slave revolt in 1804 that drove out the French Empire.

The workers and youth of France, led by the CGT, are waging a stubborn, up-or-down struggle against the French ruling class, which is a vicious, determined enemy that so far has refused to concede. Nevertheless, the workers have a real chance to win. Every act of solidarity is important.