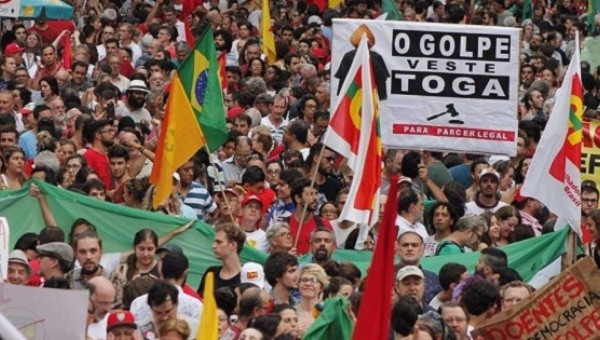 On the morning of May 12, the Brazilian Senate announced the decision to begin a trial of impeachment against President Dilma Rousseff. This long session, begun the day before, in which each member of the Senate had 15 minutes to testify in the trial, was a demonstration of the power of the Brazilian oligarch class aligned with U.S. imperialism in order to impose a full neoliberal plan to take back any advance that has benefited the poor.

To no avail were logical arguments by some senators and the President’s lawyer, who rejected the final judgment based on facts that showed, without any doubt, the lack of evidence against Rousseff and the illegitimacy of charges of corruption.

As Vanessa Graziottin, senator of the Communist Party of Brazil (PCdoB) said, “[It] is not a process of impeachment. It is a coup to change the political-economic plan for the nation.” (Telesurtv)

The decision had been made in advance. Those who voted for the trial based their action on the critical situation of the economy and the need to advance policies for the benefit of private investment and not the people.

Approved with a majority of 55 votes in favor and 22 against, Rousseff was removed from office for up to 180 days, and Vice President Michel Temer, from the right-wing Brazilian Democratic Movement Party (PMDB), was named interim president. The trial will begin in mid-May.

Meanwhile Temer also faces the possibility of impeachment by the Supreme Court. According to the Datafolha polling agency, only 2 percent of the population would vote for him in a presidential election.

It is no wonder then that the PMDB has opted for a change under a congressional coup, as it would not have happened by electoral methods. It is interesting that a September 2015 Wall Street Journal article noted: “The Brazilian Democratic Movement Party became one of this nation’s most powerful political forces by adopting an unusual strategy: Instead of seeking the presidency, it has long functioned as Brazil’s kingmaker, trading its support to the ruling party in exchange for patronage jobs and influence.”

Despite Temer’s being part of the Rousseff cabinet, his tendency to neoliberalism and criticism of the governments of Lula da Silva and now Rousseff have been previously documented. In a May 14 article in La Jornada of Mexico, titled “Michel Temer was a CIA informer in 2006, says Wikileaks,” “Temer criticized Lula for his ‘narrow view’ and the ‘excessive emphasis on social programs that do not promote growth or economic development.’ “

Now, the PMDB through Temer has wasted no time in presenting his cabinet and neoliberal program, which the business sector, both Brazilian and transnational, welcomes. According to a May 12 article in the Spanish Wall Street Journal, titled “The business sector welcomes the change in Brazil,” “The initial reaction in the currency market in Brazil was positive. The Real rose one percent” after the vote.

Temer’s neoliberal program, called “A Bridge to the Future” and unveiled in October 2015, is an actual transfer of the people’s wealth into private hands and transnational companies. The 19-page document “evaluates” various social programs established during the governments of Lula da Silva and Rousseff that helped raise the standard of living of thousands of Brazilians. Unemployment compensation will be ended, and cuts will be made to housing, education subsidies for poor and Black students, and health. Temer’s program will also reduce social assistance to only the poorest 10 percent. (tinyurl.com/h6zhztq)

Regarding labor rights, the program seeks to increase the retirement age and alters provisions guaranteeing the minimum wage. Included are attempts to privatize the national oil company, Petrobras; reform the pension system; etc.

To achieve this, Temer appointed a cabinet of 22 ministers, eliminating such ministries as Culture, Agricultural Development, Science and Technology, Women, Racial Equality and Human Rights.

Previously, João Pedro Stedile, the coordinator of the Movement of Landless Workers (MST), had declared, “A Temer government would be fully aligned with U.S. interests. … I think the worst part is that they are applying a policy aimed at having U.S. companies dominate our economy. The U.S. modus operandi is to ally with Brazilian parliamentarians to achieve that dominance. This happened with the Chevron oil company, which, through Senator Jose Serra of the Party of Brazilian Social Democracy, is pushing to change the oil law to move towards the privatization of resources in the very deep waters in the pre-salt area.” (Pagina12.com.ar)

In the country with the largest Black population outside of Africa, it has been a real slap in the face against that Black population, women, Indigenous and LGBTQ people that the Temer cabinet is composed only of white men with business interests.

For example, consider some of the new ministers: Agriculture Minister Blairo Maggi is a millionaire landowner known as the “soy king,” who environmental activists blame for much of the destruction of the Amazon rainforest. Alexandre de Moraes, Temer’s “pitbull,” who headed the cops accused of violating human rights with their death squads in Sao Paulo, is now in charge of the Ministry of Justice. Evangelical pastor Mark Pereira is the minister of industry, after the scientific community rebelled against the proposal that he be named to head the Ministry of Science and Technology. Jose Serra, who is tight with Chevron, will be the foreign minister.

Incidentally, seven of the new ministers are under investigation regarding the Lava Jato corruption case and for fraud regarding Petrobras.

Even before the vote, there had been no calm days in Brazil. The people have taken to the streets constantly, creating alliances demonstrating under the slogan “Temer must go.”

On May 9, thousands of peasants occupied a farm connected to Temer. Kelli Mafort, MST leader, said, “The occupation of this farm is aimed at denouncing the role of agribusiness in bringing about the coup … and we are here to denounce Michel Temer’s ties to the owner of the farm, and of his company’s role receiving kickbacks.” (Telesur)

Feminist activists chained themselves to the gate of the presidential palace protesting Temer’s cabinet, which they called “racist, sexist, homophobic and elitist.”

People have demonstrated not only in the capital, Brasilia, but in Sao Paulo, Rio de Janeiro and elsewhere. MST leader Stedile, in an interview with Resumen Latinoamericano on May 13, summed it up: “It’s the moment to mobilize against the coup d’etat. It’s a coup without army tanks in the streets, but just as destabilizing. … The president has committed no crime and has been illegally deposed. The popular organizations are clear on this. The working class is clear. The intellectuals, artists and progressive grass-roots church are clear. For the MST, for all the movements gathered in the Brazilian Popular Front, the Temer-Cunha government has no legitimacy because it is born under the sign of corruption and the return of neoliberalism.

“We brought to the president of the Senate, Renan Calheiros, and to the president of the Supreme Court, Ricardo Lewandowski, the equivalent of three volumes of signatures against this impeachment process. Meanwhile, we must be ready to use all our energy because we expect a period of great struggles and crises at all levels: political, social, environmental.”

Governments and organizations condemn the coup

Several governments in the region have already spoken out against the coup. Venezuela withdrew its ambassador in Brasilia for consultation. El Salvador and Nicaragua do not recognize the Temer government.

The countries that make up the Bolivarian Alliance for the Peoples of Our America-Trade Treaty of the Peoples (ALBA-TCP) issued a statement rejecting the coup.

In several countries demonstrations rejecting the coup have been called, and on social media there are many messages against the coup and in solidarity with the Brazilian people in struggle.