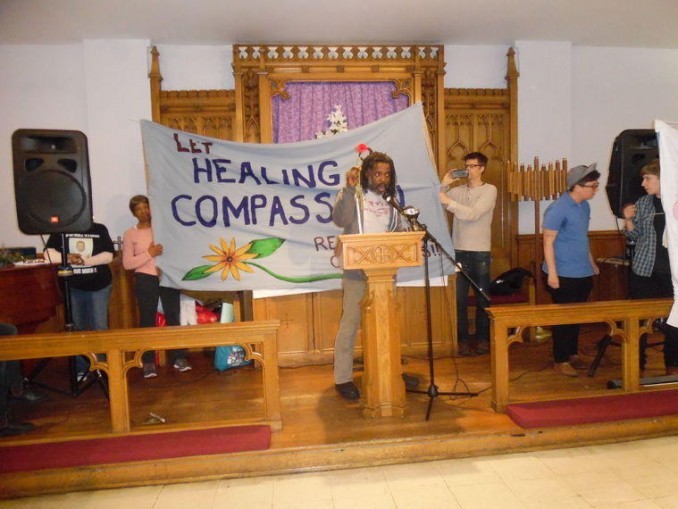 A rally on May 6 called on Pennsylvania to end the legal sentence “juvenile life without parole” (JLWOP), also known as “death by incarceration.” The gathering took place in Philadelphia, which has sentenced more children to die in prison than anywhere else in the world.

The Mother’s Day Rally to Restore Families & Communities and Bring Our Loved Ones Home drew close to 100 people in the Arch Street Methodist Church, who had been forced inside because of rain. Speakers included mothers of people serving JLWOP sentences, mothers who have lost children to violence in Philadelphia, prerecorded audio and written statements from people currently serving JLWOP, and other members of the Coalition to Abolish Death by Incarceration.

Patricia Vickers, Anita Colon, Ellen Melchiondo and Lorraine Haw exposed raw emotions as they described the pain of having their loved ones held in prison for decades until their eventual death. Kimberly King spoke as a mother doubly affected. Her eldest brother was given a mandatory life sentence without chance of parole 24 years ago. Her younger brother was later killed at 22. “I have forgiven, because in truth, no matter what happens to that young man who took my brother’s life, it does not make the pain easier. It does not bring him back. And how can I very well condemn this brother when I ask for forgiveness for my brother?”

Kempis Songster, a 44-year-old serving a life sentence at Graterford Prison, spoke via phone to the rally. Imprisoned since the age of 16 after he was convicted of first-degree murder for stabbing another teenage runaway, he described how he has matured, taking advantage of every educational opportunity available to him in prison and mentoring other prisoners. “Some of us never stop looking for ways to express how deeply ashamed and sorry we are,” Songster said. “What we bring to the table will never measure up to what we took from the table.”

Melchiondo added, “I recently spent the day at Muncy [Women’s Prison] at an event to honor the women serving juvenile life without parole, and I can tell you not one of them is irreparably corrupted. In fact, I don’t believe it is humanly possible to predict that. Perhaps it is the city and the state that are irreparably corrupted.”

The United States is the only country that sentences people to life without parole for crimes committed before turning 18. Some 500 people sentenced to life in prison when they were juveniles are being held in Pennsylvania’s prison system — more than in any other state. Philadelphia accounts for over 300 JLWOP sentences — more than from any other city.

The U.S. Supreme Court has ruled that mandatory JLWOP sentences are unconstitutional. The court’s 2012 decision in Miller v. Alabama found that mandatory life sentences for children violate the 8th Amendment’s prohibition of cruel and unusual punishment. In January, the Supreme Court clarified that the decision applies retroactively. Yet in Pennsylvania, people serving JLWOP are still waiting for relief from these unconstitutional sentences.

According to a March 24 report by The Sentencing Project, “Juvenile Life Without Parole: An Overview,” the court emphasized several points in reaching its decisions. “Research on adolescent brain development confirms the commonsense understanding that children are different from adults in ways that are critical to identifying age appropriate criminal sentences. This understanding — Justice Kennedy called it what ‘any parent knows’ — was central to four recent Supreme Court decisions excluding juveniles from the harshest sentencing practices.”

Another major issue leading to the court’s decision was that “The life experiences of the approximately 2,500 people serving juvenile life sentences vary, but they are often marked by very difficult upbringings with frequent exposure to violence; they were often victims of abuse themselves.” The report noted that a mandatory sentencing structure does not take into account “the family and home environment.”

In 2012, The Sentencing Project survey of people sentenced to life in prison as juveniles revealed that 79 percent regularly witnessed violence in their homes, 32 percent grew up in public housing, 40 percent had been enrolled in special education classes, fewer than half were attending school at the time of their offense, 47 percent were physically abused, and up to 80 percent of girls reported histories of physical or sexual abuse. In addition to their backgrounds, the youth were forced to plead for fairness in a court system in which racial disparities plague the imposition of JLWOP sentences.

Without a doubt, long-term poverty and lack of educational opportunities have not been adequately considered in sentencing so many Philadelphia youth to life in prison without parole.

“More than 100 of the Philadelphians serving JLWOP have been in prison for over 30 years,” said Hakim Ali, of the Coalition to Abolish Death By Incarceration. “It’s past time for our elected officials to implement the Supreme Court’s decision.”

CADBI is demanding that District Attorney Anthony Williams support resentencing those currently serving JLWOP under the third-degree murder statute, which now carries a penalty of 10 to 20 years in prison. It is asking Pennsylvania courts to facilitate fair and timely resentencing. CADBI requests that the mayor and City Council ensure that everyone eligible for resentencing gets adequate legal representation. It is also calling on the governor and the state legislature to abolish life without parole as a mandatory sentence for all people, regardless of their age.