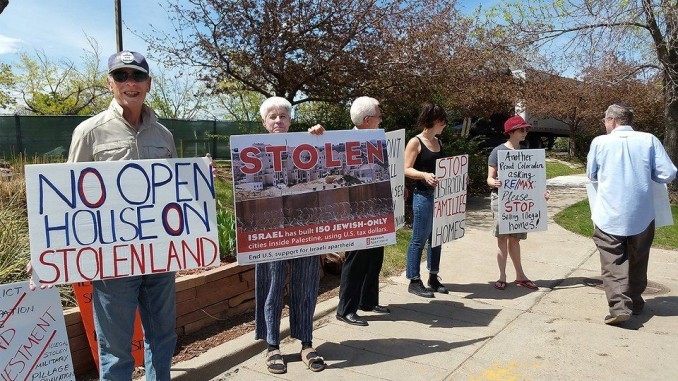 Speakers from two groups concerned with the rights of Palestinians spoke to the international shareholders’ meeting of the RE/MAX company in Denver on May 5, asking them to set up a committee to investigate the practice by the company’s Israeli division of selling land, houses and buildings stolen from the Palestinian people.

As 50 of their supporters marched outside the enormous international headquarters of the real estate firm, speakers from Code Pink and Heartland described how the company was building and selling homes on Palestinian land that is now restricted only to Jews, essentially building Jewish-only communities. RE/MAX sells properties within illegal Israeli settlements in the occupied West Bank.

RE/MAX International has condoned this practice and continues to profit from the sales of these Palestinian homes to Jewish-only buyers.

The demonstrators outside held signs saying, “No open house on stolen land,” “Colorado for a just RE/MAX,” “Demolishing Palestinian homes perpetuates violence” and “Profits from pain is ­inhumane.”

Police threatened to arrest protesters if they went onto the massive RE/MAX property, but allowed them at the entrance, where they were visible to passersby on the busy street. According to spokesperson Saadia Behar from Jewish Voice for Peace, organizations responsible for the action also included Coloradans for Justice in Palestine, Friends of Sabeel, Code Pink and Heartland.