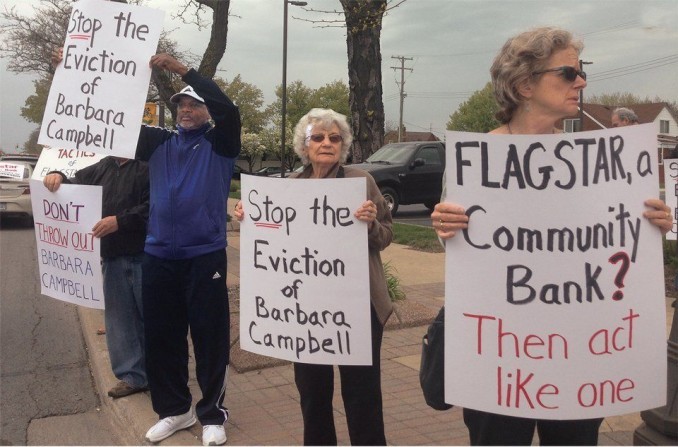 In her youth, Detroit resident Barbara Campbell was an associate of Dr. Martin Luther King Jr. Today, as a senior, she has become an anti-foreclosure activist. In a city that has become the country’s foreclosure capital, Campbell is refusing to become a statistic.

Flagstar Bank has gone to court to have Campbell evicted from the home she purchased in 2006. After being diagnosed with cancer, she applied for a hardship-based mortgage modification. Campbell, who has had heart surgery, now has kidney failure and uses a wheelchair. She had been told to hold off on making payments while her application was being reviewed. Then the loan servicer, Nationstar, did an about-face, foreclosing on her home for failure to make payments. Since then, her home has been sold more than once, changing hands between Nationstar, Flagstar and Fannie Mae, which is owned by the federal government.

Campbell is fighting the eviction and is represented by the heroic people’s lawyer, Vanessa Fluker.

On May 7, dozens of supporters picketed a branch of the bank, making it clear to Flagstar that Barbara Campbell is not alone. They chanted, “Housing is a right! Fight, fight, fight!” and “Dumpsters are for leaves, not the banker thieves!” — referring to the fact that, in Detroit, dumpsters are used to collect yard waste — as well as personal belongings during an eviction. The action was called by Detroit Eviction Defense. Members of the Moratorium Now! Coalition to Stop Foreclosures, Evictions and Utility Shutoffs and several United Auto Workers locals joined the picket line. Campbell, who came to the protest with her son Garrett, thanked her community supporters.

Demonstrators held signs attacking Flagstar’s claim to be a “community bank.” Flagstar is owned by a Wall Street company that even Forbes magazine has labeled a “vulture investor.” In 2014, the bank was charged by the Consumer Financial Protection Bureau with “illegally blocking borrowers’ attempts to save their homes.” Flagstar paid penalties of $37 million and agreed to stop denying qualified homeowners a mortgage modification. This was a paper promise, as shown by their callous attempts to put a senior citizen with major health problems out on the street.

There is no end in sight to the foreclosure crisis, with tens of thousands in Detroit facing tax foreclosure and the banks continuing to steal people’s homes. But the housing rights movement shows no signs of going away either.