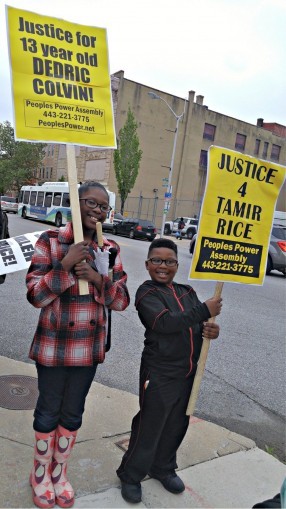 Baltimore has become a national focus of protests against racist police murders and attacks. Here, Baltimore activists describe three recent events in which the Black community and its supporters mobilized in the fight to bring the police to justice.

People gathered in East Baltimore on April 30 to demand justice for Dedric Colvin, a 13-year-old boy who had been shot two days earlier by plainclothes police officers. Colvin, who survived, was shot in the leg and shoulder during an encounter with police, who say he was carrying a basketball and a toy BB gun.

When his mother tried to assist her son, who was lying on the ground badly wounded, police responded by handcuffing her. They held her in the city jail before she was finally allowed to see her son at Johns Hopkins Hospital.

Protesters at the site of the shooting spoke out against police actions, opposing a “shoot first and ask questions later” policy when it comes to Black people in Baltimore. They contrasted what happened to Colvin with cases where police attempt to “talk down” white suspects. They also made it clear that police “were shooting to kill” in this case.

On the day after the shooting, Police Commissioner Kevin Davis blamed the 13-year-old and his mother for the police assault, questioning the boy’s motives for walking in his own neighborhood with a basketball and a toy gun. Davis said the officers had “little choice.”

After an hour of speeches about police brutality in Baltimore, activists led a march from the site of the shooting down Fayette Street to police headquarters. Chants of “Tell the truth and stop the lies! Our Black children don’t have to die!” and “What do we want? Justice! When do we want it? Now!” rang out from the crowd. Many passing motorists honked and leaned out of windows to express their solidarity with the group.

This shooting occurred on April 28, the one-year anniversary of the Baltimore Uprising, which came in response to the police killing of Freddie Gray. One year later, many residents are left wondering what happened to the promises made to the community by police officials and local government. Protesters have said they are more committed than ever to fighting police brutality in Baltimore.

Nearly three years ago, police in northeast Baltimore killed a 44-year-old ­African-American man. While the details surrounding the death of Tyrone West on July 18, 2013, are for the most part unknown, the story is all too familiar in the United States.

Police in an unmarked vehicle made West pull his car over merely for “suspicious activity.” At some point, a struggle broke out in which the police attacked West with their batons, fists and pepper spray. The ordeal ultimately killed him.

In a typical cover-up, the medical examiner’s report stated that West died from a heart attack due to summer heat and a “pre-existing heart condition” — not from excessive force by several police officers who beat him. The police who murdered him were then cleared of any wrongdoing and never charged with any crime.

There was one problem with this narrative: West’s family says he was in good health and had no heart condition.

A recent independent review of the examiner’s report by Dr. William Manion of Memorial Hospital in Salem County, N.J., says the evidence points not to a “bad heart” having killed West, but instead to “positional asphyxiation.” He was suffocated. The family is calling for the body to be exhumed so another autopsy can be performed, this time independently of the police.

This new review of the case is the latest action in a long struggle by West’s family for justice. Tawanda Jones, West’s sister, has been a particularly active and visible fighter for her brother. For 146 weeks — on every Wednesday since West was murdered by the police — she has held a protest somewhere in Baltimore as part of a series of “West Wednesdays.”

The murder of Tyrone West, as well as the complicity of the medical examiner and the ultimate lack of police accountability, is emblematic, on the one hand, of the war being waged by the police forces of the capitalist U.S. government against all nationally oppressed peoples. On the other hand, the tenacity and defiance shown by his family and other groups who have time and again taken to the streets inspire confidence that the people will eventually win justice for the victims of police brutality and overthrow this racist capitalist system.

“This is just wrong. I want justice for my son,” said Renee Winston, mother of Aaron Winston, after his first trial hearing on May 3. Her call echoes the pain and resiliency of those Black folks resisting police forces that creatively mask feelings of anti-Blackness behind employment of Black officers, diverting attention from police impunity to “Black-on-Black crime” and blaming unarmed, innocent people. Her call illuminates the unjust workings of a white supremacist society only interested in living Black bodies when they are mute and exploitable for profit.

When a Black person survives an attack by a racist white police officer, it is defiance. Aaron Winston defied.

On Feb. 20 at the Power Plant Live! nightclub, Winston was asking a Baltimore police officer with whom he was friends why his companion was being removed from the club. A white police officer came from behind and forced Winston to the ground in what is known as a “take down.” The attack left him with an arm broken in three places, held together only by screws.

After begging to be taken to the hospital, Winston was verbally harassed by officers before being seen by a doctor, given just enough time for surgery and then thrown in jail without pain medication. Winston was charged with two counts of second-degree assault, two counts of resisting arrest, failure to obey, obstructing and hindering, and disorderly conduct.

Winston has since been released, and is undergoing therapy. The Baltimore People’s Power Assembly held a small picket line outside his first hearing on May 3. Winston was granted a jury trial, scheduled for June 9. Supporters of Winston will not be moved and are demanding that the officers who brutalized him be charged with assault, jailed and fired and that all charges against Winston be dropped immediately.