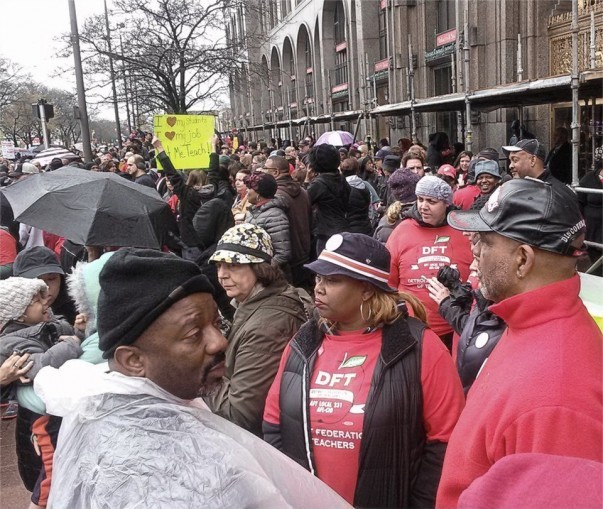 Detroit, May 3 — Late this afternoon it was announced by media outlets that the Detroit teachers scored a victory in response to their two-day sick-out when Detroit Public Schools emergency manager Stephen Rhodes caved in and agreed to pay teachers’ salaries owed to them through the summer months.  The battle continues for adequate funding for quality education for Detroit’s youth; to stop public funds being diverted for debt service payments; and to restore local control of Detroit public schools to this majority African-American city.

Like yesterday, thousands of members of the Detroit Federation of Teachers called in sick today, closing down the school system citywide. The sick-outs were in response to an announcement by Detroit Public Schools emergency manager Stephen Rhodes that there is no funding for DPS past June of this year. Rhodes is a now-retired federal judge who presided over the city of Detroit bankruptcy in 2014. This means many of Detroit’s underpaid and overworked teachers — those who spread their salaries over the entire school year despite not working during the summer months — are now working for nothing.

Thousands of teachers and other education workers surrounded the DPS headquarters in the New Center area beginning at 10 a.m. on both days. They chanted slogans such as “What happened to the money?” and “No pay, shut it down!”

These actions represent a continuation of previous sick-outs where teachers brought attention to the deplorable conditions within the school district. The Detroit public education system has been under some form of direct or indirect state control since 1999. The district has lost 150,000 students since then.

The corporate-imposed education crisis is reflected in the lack of school supplies and deteriorating buildings with leaking roofs, mold, mushrooms and other unsafe conditions. Many schools lack proper ventilation, and buildings are either too hot or too cold. The crisis is also reflected in the opening of scores of charter schools in Detroit, depriving the school system of desperately needed funds.

Moreover, the decline in DPS enrollment, in part a by-product of the foreclosure and eviction epidemic over the last decade that drove more than 200,000 people out of the city, has resulted in the closure of over 200 school buildings. Many of these abandoned schools have been vandalized and stripped of copper, iron, brick, electrical equipment and other materials, becoming stains on the neighborhoods and facilitating further underdevelopment and blight in communities across Detroit.

When the state of Michigan seized control of DPS in 1999, the district had a $93 million surplus, with at least another $1.5 billion in bond funding approved by voters to improve school buildings and other infrastructure. At present, reports indicate that DPS is $3.5 billion in debt, with substantial portions owed to the banks and bondholders.

The sick-outs come while the state government in Lansing is debating bills to “fund” the Detroit public schools. The bill passed by the State Senate would set up two districts, one with $515 million in funds to be used only to pay debt service and a second with $200 million to fund operations. The bill would remove the current elected Detroit School Board and replace it with an essentially powerless board, with the superintendent and executive officials to be named by a commission appointed by reactionary Flint-poisoner Gov. Rick Snyder, as well as Detroit Mayor Duggan.

However, the reactionary State House has rejected this bill, debating one instead that would limit school funding to $500 million — only debt service would get paid! — and contains punitive attacks on Detroit teachers’ rights. The House bill removes any oversight over charter schools, which have proliferated in Detroit despite their failure in educating Detroit students.

In the past couple of days it has come out that the actual debt for Detroit Public Schools — debt accumulated under the leadership of various state-appointed emergency managers — is far higher than previously announced, requiring at least $800 million to meet the bondholders’ immediate demands. In addition, a report surfaced that the emergency managers’ illegally used approximately $40 million in federal funds earmarked for special needs teachers’ pensions for operating expenses.

One of the demands of the striking teachers is for an audit of school funds to account for how the enormous debt occurred under emergency management. It is absolutely criminal that in a city where schools are falling apart and the needs of Detroit’s children for quality education are so great, more school funds are likely to be used to pay debt service to banks and financial institutions than to educate students.

Federal housing funds, purportedly aimed at maintaining stability in the neighborhoods by assisting residents with paying off mortgages, over-assessed property taxes and inflated water bills, are instead being utilized to tear down homes and vacant businesses. The federal government is investigating irregularities in the expenditures for demolitions coordinated by the Detroit Land Bank Authority.

The Detroit Blight Removal Task Force, which identifies homes and other structures for seizure and demolition, is chaired by billionaire Dan Gilbert, head of Quicken Loans. Gilbert’s role represents a clear conflict of interests. Gilbert is currently being sued by the Department of Justice for the misuse of hundreds of millions of dollars in Federal Housing Administration funds through his real estate financing operations.

Meanwhile, Gilbert announced April 27 that he and other capitalist investors have created a plan to construct a soccer stadium in downtown Detroit. Gilbert, who owns Rock Ventures LLC, the Cleveland Cavaliers professional basketball team and other enterprises, is a major player in the bank-led restructuring of Detroit. He and Detroit Pistons executive Arn Tellem declared their plans for the $1 billion project at the site of Wayne County’s failed jail. News reports from 2014 when construction was stalled said $150 million was lost on the proposed new jail due to cost overruns and corruption.

During 2015 Gilbert made his opposition to constructing the jail in the downtown area well known. Instead, the banker and venture capitalist envisions a 25,000-seat Major League Soccer stadium and other businesses, including restaurants, hotel accommodations and a commercial office tower.

An article published April 27 in the Detroit Free Press stated: “The soccer stadium plan calls for relocating the current Wayne County Jail, Frank Murphy Hall of Justice and the Wayne County Juvenile Detention Facility to Mound Road (far away from downtown). Gilbert has been trying to buy the unfinished jail site from the county, recently offering $50 million. The county, which has already sunk $150 million into the … stalled project, did not accept the bid.”

Gilbert and his capitalist cohorts do not want the jail to be in the downtown area because it interferes with their vision of the city, which is being designed as a playground for suburbanites and tourists while the neighborhoods are destroyed by the same banks and other capitalist forces.

Jerry Goldberg contributed to this article.