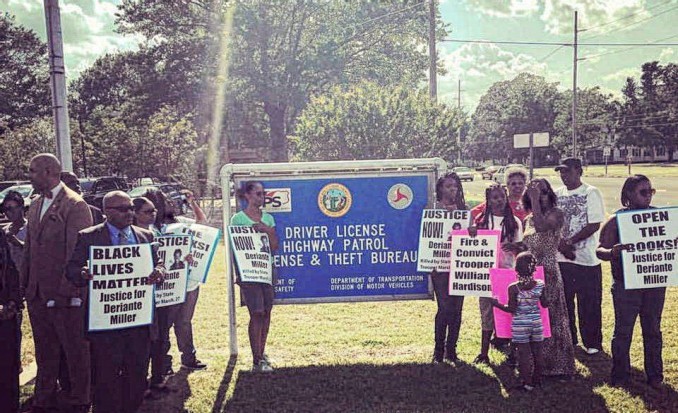 Kinston, N.C. — The murders of Black youth at the hands of police, state troopers and county sheriff’s officers is not just a problem in U.S. cities.  In rural areas too, where often communities are left without quality public schools, jobs, roads and recreational centers, and also where large corporations dump their toxic waste, there is an intense war on Black, Native and immigrant people.

The killing of Deriante Miller by state Trooper William Hardison in Kinston, N.C., on March 27 is a recent example.

The 18-year-old Miller was hanging out at his sister’s party at Club Aries with his brother and friends, just having a good time. When a fight broke out at the club, he and his brother thought it would be best to get out of there.  His brother was driving, and he had parked at the end of the road, around the corner from the club.

In this rural area there are no parking lots. People just park along the side of the road. The two parked parallel with other cars so they could pull on to the road quickly and not get stuck behind other cars, if trouble broke out at the club.

Trooper Hardison came onto the scene with his gun drawn. He shot at the first Black body that he saw — killing Miller.  The state trooper’s office press release states that Miller had a gun, that he pointed it at Trooper Hardison and that he was given a warning to put down the gun.

According to Miller’s brother, though, who was the only witness on the scene, this is not at all what happened. He said there was no warning and his brother never had a gun. It is believed by the family and community that a gun was planted on Miller’s dead body.

“My son was innocent,” stated Michelle Miller, the dead youth’s mother, at a press conference on April 28. “He was a very good student, wishing to graduate from Lenoir County Community College soon. He was a class president of the school and loved by his classmates.”

Not just one bad apple

Michelle Miller was joined by many community organizations, including the Kinston Voters League, Indy Left PAC, the Pitt County Coalition Against Racism, Electrical Workers Local 150-NC Public Service Workers Union, the Nation of Islam, Black Workers for Justice and Workers World Party, at an action on April 28. The groups delivered an information request to the State Highway Patrol, the State Bureau of Investigation and the Lenoir County sheriff for over 15 items, including the autopsy, investigative report, photos, videos and information about the gun planted on Miller.  The rally also demanded that Trooper Hardison be fired and convicted of murder.

“Trooper Hardison is a terror to our community and he needs to go!” stated Indy Left PAC activist David Bell of Kinston.

Hardison has an extensive record, including at least six known shootings, and also a Taser use that resulted in the death of James Clayton after a traffic stop in December 2010 in Perquimans County. Hardison has been transferred to three different counties in the last five years after incidents, according to community members at the action.

Sheldon Dancy also spoke out about a 2011 attack he suffered from Hardison that resulted in hundreds of stitches after he was shocked with a Taser over 70 times and beaten with a nightstick on the head in several spots. Dancy was left to bleed in a ditch, risking his death, but never charged with any crime.

Larsene Taylor, president of UE Local 150, NC Public Service Workers, was also present to support the Miller family. “I want to say, as president of a union and a member of Black Workers for Justice, we come here today in solidarity and support of the Miller family,” Taylor said. “The war on Black America has to stop. Justice must be served.”

Many speakers at the action asserted that the state often covers up and ignores the murder of Black and other oppressed people at the hands of the state.  At least three people are killed each day by law enforcement in this country, with a disproportionate number being Black, Native or immigrant people.  The struggle for justice and power is not just about one bad state trooper, it is about a system of oppression, exploitation and racism that must be defeated.