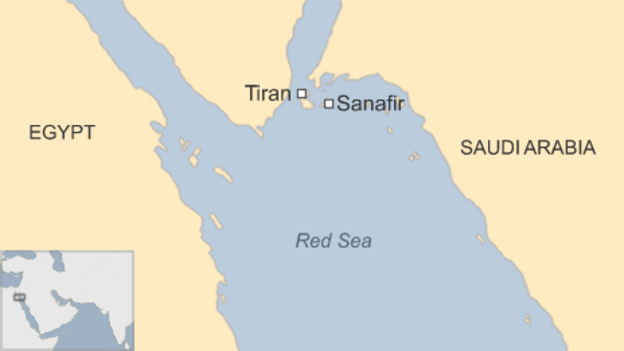 During the week of April 11, it was revealed that the Egyptian government of President Abdel Fattah al-Sisi is proposing to turn over the strategic islands of Tiran and Sanafir to Saudi Arabia. These islands have been under Egyptian administrative control since 1950, just two years after the founding of the state of Israel.

This Egyptian decision indicates that the existing foreign policy imperatives of Washington and Riyadh take precedence over the liberation of Palestine and the genuine independence of states in North Africa and the Middle East.

Within the military sphere, the Egyptian-Saudi alliance is clearly illustrated through Egypt’s cooperation under Saudi and Gulf Cooperation Council leadership in the year-long war against the people of Yemen. This war has resulted in the deaths of at least 10,000 people and the displacement of millions of others.

This decision on the islands, which is subject to approval by the Egyptian parliament, has generated much debate and opposition inside the North African state. In a nationally televised speech on April 14, al-Sisi defended his decision, saying,  “We did not surrender our right, and we returned the right back to its people.” He added that there are documents that prove the islands are Saudi.

The military leader — turned civilian president in 2013-2014 — argued that Egypt had only two choices in the matter involving the islands: “Either enter into a conflict with Saudi Arabia, or giving Saudi back its land and right. We will not infringe on anyone. Also, we will not give away our land to anyone, and will not take anyone’s land.”

Many observers of Egyptian politics believe that the parliament is aligned with the al-Sisi government and will vote in favor of the measure. Recognizing the broad opposition to the announcement, the president has warned Egyptians not to demonstrate against the decision.

An article in the Washington Post on April 13 reported that the decision by the Egyptian government was supported by the state of Israel: “The two countries [Israel and Saudi Arabia] have no formal ties, but there have been hints of quiet cooperation — or at least a strategic dialogue — over certain issues such as Iranian influence in the region. As analysts pondered the implications for Israel of Saudi control of the two islands — at the entrance to the Gulf of Aqaba, an important shipping route for Israelis and Jordanians — Defense Minister Moshe Yaalon told Israeli reporters that he had received official documentation that Saudi Arabia would continue to allow Israelis freedom of passage in the area.”

This same article says Yaalon confirmed that Israel had been consulted before the transfer and that the “Israeli daily Haaretz” reported “the transfer plan needed the approval of Israel, the United States (because Washington helped broker the Egypt-Israel peace accord), and a multinational observer mission monitoring the islands.”

The islands are important in regard to the contested sovereignty and ownership of the Gulf of Aqaba, a major issue in international law for decades. The Gulf of Aqaba is located at the northern tip of the Red Sea, east of the Sinai Peninsula and west of the Arabian mainland. The coastline expands across Egypt, Israel, Jordan and Saudi Arabia.

The 1967 Six-Day War (June 5-10) between Israel and the regional states of Egypt, Syria and Jordan, was prompted in part due to the President Gamal Abdel Nasser government’s exercise of sovereignty. Egypt had blockaded the Straits of Tiran, preventing Israeli shipping from passing through the Gulf of Aqaba beginning on May 23, 1967. Tel Aviv later launched an attack against Egypt, which was backed by the U.S. administration of President Lyndon B. Johnson.

In a speech to soldiers at an advanced Air Force headquarters in Sinai, President Nasser said that any ships flying Israeli flags or transporting strategic materials would be forbidden to pass in and out of the Gulf past Sharm El Skeikh at the mouth of the Gulf. One week earlier on May 16, 1967, Nasser ordered the removal of the first United Nations Emergency Force from the Sinai.

The UNEF had been established in the aftermath of the Suez crisis of 1956, when the Egyptian government had nationalized the canal, sparking the intervention of Britain, France and Israel in a failed effort to overthrow Nasser.

After the death of Nasser in 1970, another war was fought in October 1973. Egypt under President Anwar Sadat moved in the Sinai to reclaim land that Israel had seized in 1967. In the aftermath of the 1973 war, another UNEF was deployed from October 1973 to July 1979.

During this period, Egypt and Syria’s governments supported the liberation of Palestine and the defense of regional states from Israeli aggression. The Soviet Union supported Egypt politically and militarily in both the 1967 and 1973 wars, while the U.S. backed Israel.

Today, Egypt’s military-turned-civilian regime is largely dependent upon economic and political support from Saudi Arabia and the U.S. Washington supplies at least $1.3 billion in direct aid to the Egyptian government every year, along with military equipment, advisors and intelligence sharing.

A popular uprising in 2011 removed President Hosni Mubarak, who was Sadat’s successor after the latter’s 1981 assassination. Three subsequent Egyptian governments have continued their reliance on assistance from Washington and its allies in the region, including the state of Israel.

Saudi Arabia has facilitated U.S. dominance in the area by providing loans to Egypt. According to an article published by Bloomberg on Jan. 4: “Saudi Arabia agreed to provide Egypt with more than $3 billion in loans and grants to help its dollar-starved economy. … The loans are on favorable terms.”