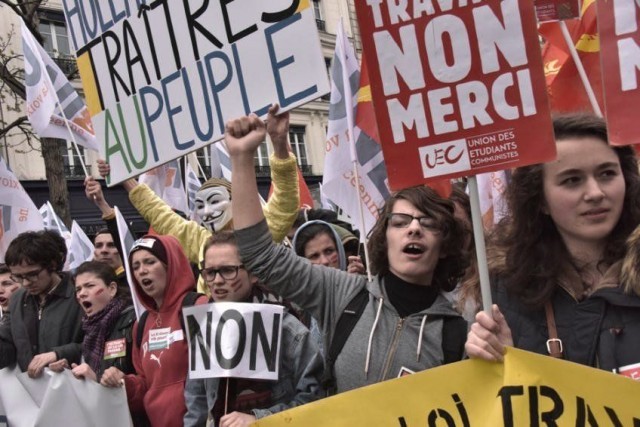 Paris police swept the tents and banners of young protesters from the Place de la Republic on the morning of April 11. The youth had occupied the square since March 31. That’s when demonstrations throughout France of more than 1 million unionists and students protested the new anti-labor law pushed by the government of François Hollande.

The new law would make it even harder to find secure employment. It would allow bosses to fire workers without the kinds of notice and protections the French working class had won in earlier struggles. It also eliminates the guaranteed 35-hour work week.

By all indications, this new incarnation of 2011’s “indignant ones” in Spain and Occupy Wall Street in the United States will be back, even if police pushed protesters out of the squares of the 60 cities and towns outside the capital.

In all those squares, tent cities arose. People stayed up all night to debate the big questions facing their future. By all appearances, the young people hold the support of the unions and social organizations to the left of the misnamed Socialist Party that Hollande heads.

Two days earlier, on April 9, some 390,000 people in cities and towns all over France had taken to the streets to trash the new anti-labor law. This was the first weekend demonstration in the continuing series of protests. It included the participation of families with young children.

Two major union federations, the CGT and FO, backed the protests, but university and high school students and young workers continued to lead the way. The demands have gone beyond the new law. Even as early as February people wanted to take the protests to another level. They decided after a protest they would just stay in the streets. (theguardian.com, April 8)

“On March 31, at the time of the labor law protests, that’s what happened,” a former delivery driver told the Guardian. “There was torrential rain, but still everyone came back here to the square. Then at 9 p.m., the rain stopped and we stayed. We came back the next day, and as we keep coming back every night, it has scared the government because it’s impossible to define.

“There’s something here that I’ve never seen before in France — all these people converge here each night of their own accord to talk and debate ideas — from housing to the universal wages, refugees, any topic they like.”

Occupy and the ‘indignant ones’

Anyone who participated in the Occupy Wall Street actions starting in the fall of 2011 in the U.S. will recognize the scenes in France. The young people seize plazas in cities and towns and stay on their feet all night to protest and discuss. Demonstrators in France have even adopted the OWS term “1%” to refer to the bosses and bankers who rule the country.

These actions are also similar to the demonstrations of the “indignant ones” that began in Spain in May 2011. And now some of the “Nuit Debout” (“Up All Night”) protests have spread from France across the border to Belgium and back to Spain. The youth don’t want to give up their spaces for free and democratic discussion of policies that determine their future.

As in Spain and the U.S. in 2011, however, it looks like the French government is ordering the repressive force of the capitalist state to stop these discussions.

President Hollande, the head of the nominally “socialist” Socialist Party, is still pushing for the new anti-labor law. In the week before the latest protests, the government made a few concessions.

So far the reaction is “too little, too late.” The formal organizations of the students are still calling for more demonstrations on April 28.

In Greece and Spain large sections of the population who used to back social democratic parties have broken with those that betrayed their working-class supporters by promoting austerity. In Britain too, Labor Party members broke with the neoliberal Tony Blair wing and elected a new leader from the party’s far left.

The outcome of the clash depends not only on the determination of the youth, but also on the support and intervention of France’s huge, multinational working class.