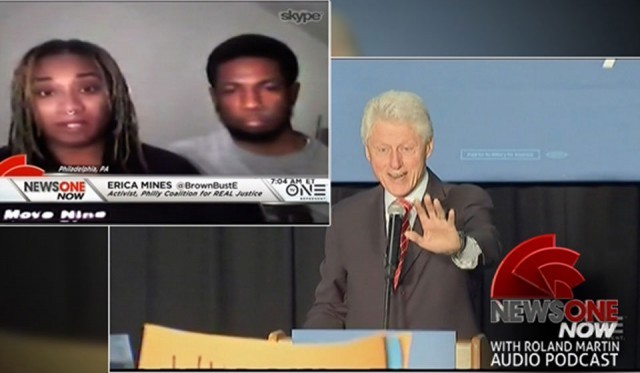 Two protesters disrupted former President Bill Clinton while he spoke at a Hillary Clinton campaign event in North Philadelphia on April 7. With signs and vocal comments, the activists took Clinton to task over his disastrous 1994 crime bill and Hillary Clinton’s roles in bloody coups, from Honduras to Libya.

In an uncharacteristic response, the normally calm and collected Bill Clinton engaged in a heated back and forth with the protesters for as long as 15 minutes. During the exchange, Clinton accused Black Lives Matter activists of “defending” crack dealers, murderers and gang leaders. Just one day later, Bill Clinton said of his racist tirade, “I almost want to apologize for it.”

The protesters, Erica Mines and Rufus Farmer, are two native Philadelphia activists with the Philadelphia Coalition for R.E.A.L. (Racial, Economic and Legal) Justice and Workers World Party. WW spoke to them after the protest.

WW: One of the signs you held read, “Clinton crime bill destroyed our communities!” What did you mean by that?

RF: The crime bill that Bill Clinton signed into law in 1994 — the “Violent Crime Control and Law Enforcement Act” — greatly contributed to the mass incarceration of African people, as well as other minorities. The bill, once established as law, made it so that an individual would receive an unnecessarily harsh sentence for even a nonviolent offense.

Furthermore, due to this bill, billions of dollars were used to fund prisons — money that could have been used to fund schools, hospitals, etc. — while at the same time this very bill disallowed Pell Grants for people incarcerated in federal and state prisons. These prisoners were no longer allowed a grant for “higher” education, thanks to this bill.

Many minorities received harsh sentences for nonviolent offenses and, once incarcerated, were no longer able to use the Pell Grant to receive additional education. For these reasons, and others, the 1994 crime bill, along with the conditions of our communities that were created by the state — an offspring of capitalism and white supremacy — has contributed to the destruction of our communities.

EM: We also wanted to let Bill Clinton know that just because his wife is running for president, we as Black folks have not forgotten what his presidential term was and how it affected us, and how Hillary also supported the crime bill through her racist statements calling Black youth “superpredators.”  We haven’t forgotten about the destruction they caused.

WW: What did you think of Clinton’s response to you?

EM: He has this deeply embedded hatred, and I’m just kind of glad we were there to expose that. It’s totally not what we intended to do, but it’s there and it serves a purpose, especially when you talk about capitalism or imperialism and war.

RF: Clinton failed to take ownership of his role in the mass incarceration of African people in the United States. Instead, Clinton blamed African people for the crime bill by insisting that it was us who had cried out to him that we wanted him — and other politicians — to do something about crime in our communities. Clinton then went on to add that Erica and myself, and perhaps all who protest on behalf of Black liberation, are defending drug dealers and murderers.

EM: I think it was good what he said. Now maybe Black folks across the country can see that voting Democrat isn’t the best way of working for the interests of the Black community.

WW: How did the crowd respond to you?

RF: Most in the crowd, at least those close to me, disagreed with the message that Erica and I presented. We raised our signs — I’m sure you’ve seen them by now — and the crowd attempted to block our signs with their Hillary signs. One person, an elder of African descent, literally called me a demon as I was having a peaceful conversation with a Clinton supporter after Bill Clinton left the stage.

WW: What would you say to the people who believe we need to support Clinton in order to beat Trump?

EM: People forget that she was partially responsible for the murder of Moammar Gadhafi just as he was on the doorstep of creating a centralized African currency. And she was never out there supporting the mothers of police brutality victims; she was supporting the crime bill that was destroying Black communities.

If people want someone like that in the office of the president, then I think it speaks a lot about what people in this country think of Black people.

RF: If we take a look at Hillary’s record, at her comments, at the things that she has endorsed — the invasion of Iraq for instance — it’s rather easy to see that Hillary Clinton endorses U.S. imperialism, oppression of minorities and crimes against humanity in general. Clinton may be of a different brand of white supremacy, but it is still white supremacy just the same.

And for that reason, Erica, myself and the Philadelphia Coalition for REAL Justice will always actively oppose Hillary Clinton. We are doing this to ensure a better future for African people and for everyone suffering from the oppression pushed upon us by capitalists and those who support white supremacy. Black liberation!