Thousands demonstrated in occupied Palestine and throughout the world on March 30, marking the 40th Land Day. The annual event commemorates the killing of six Palestinian citizens of Israel, who were protesting the Zionist state’s expropriation of more than 5,000 acres of land in 1976. 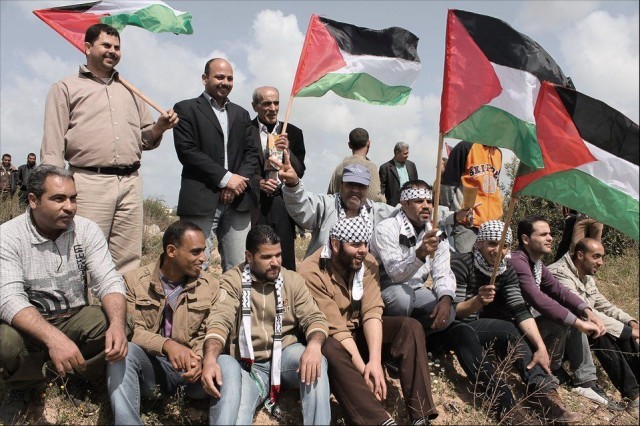 Repressing a general strike — the first mobilization by Palestinians on land seized by Israel in 1948 — the Zionist forces also wounded 100 people and detained hundreds more.

Today these events are remembered as the start of the organized struggle by Palestinians against ethnic cleansing and land theft in the heart of the Zionist occupation.

“We stand here today at the memorial of our six martyrs who were killed defending their land,” Mohamed Barakeh, chair of the Arab Higher Monitoring Committee, said during the wreath-laying ceremony at a commemorative monument in Sakhnin. “Khadija Shawahneh, Khader Khalaila, Khair Yassin, Mohsen Taha, Raafat al-Zuhiri and Raja Abu Raya, we will not forget you.”

The committee, which coordinates political activities among Palestinian citizens, called for a general strike and protests against ongoing attempts to seize Palestinian land.

“In 1976, demonstrators protested against the confiscation of 20,000 dunums [about 4,900 acres] of land, while today Israel has plans to confiscate 800,000 dunums [about 198,000 acres] in the Negev Desert,” Ayman Odeh, leader of the Hadash party and chairman of the Joint List of Palestinian factions, said in Sakhnin.

Major demonstrations took place across the Negev and Galilee regions where Palestinian survivors of Zionist ethnic cleansing operations in 1948 maintain a strong presence. Palestinians also mobilized throughout the West Bank and Gaza Strip, Palestinian territories occupied by Zionist forces and subjected to military rule in 1967.

North of Gaza City, hundreds marched toward a checkpoint in Beit Hanoun, calling for the right of return by Palestinian refugees who make up more than two-thirds of the Gaza Strip population.

“Palestinians are entitled to their land and they will give up not one inch,” Hamas leader Yahia Moussa told the crowd.

Near Ramallah, university students cut through a section of the infamous “Apartheid Wall,” hoisting a Palestinian flag over expropriated farmlands before Zionist forces repelled them with tear gas, rubber-coated steel bullets and concussion grenades.

An annual Land Day report by Adalah: The Legal Center for Arab Minority Rights in Israel described the racist allocation of land by the Israeli state, as well as Zionist “national institutions” like the Jewish National Fund. “In 2015, Arab towns in Israel received only 4.6% of new housing units and only 2.5% of reduced-cost housing units,” despite Palestinians comprising 20 percent of the population and its poorest sector, with more than half the population in poverty, the report found.

In the United States, the National Lawyers Guild filed a complaint to the Internal Revenue Service against the tax-exempt status enjoyed by the JNF, which manages land ethnically cleansed of Palestinians for the exclusive benefit of Jews.

“For nearly 70 years Palestinians have been resisting Israel’s continued theft of our land,” said Nick Sous of the U.S. Palestinian Community Network, part of a coalition of Palestinian and solidarity groups supporting the complaint. “So many Palestinians have been directly impacted by Israel’s stealing their land with the support of the JNF and it is shameful that the IRS actually awards people who donate to support these illegal actions by allowing them to get a tax write-off.”

USPCN called on its allies to sign a petition at uspcn.org and consider further actions in support of the campaign.