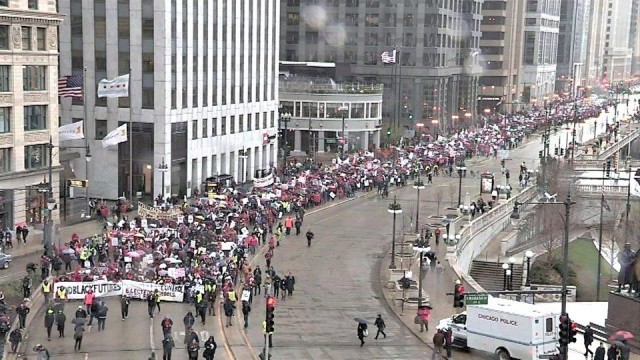 A one-day strike, initiated April 1 by the Chicago Teachers Union and Fight for $15, was joined by over 50 organizations, including Black Lives Matter, and thousands of angry students, parents and residents. The target was Gov. Bruce Rauner, who is holding the Illinois state budget hostage in an attempt to destroy all the unions in this state.

The budget’s victims are children, students, government and education workers, and social service recipients like the disabled and elderly. State university budgets have been cut by 30 percent; all Illinois college students and even private universities have lost state financial aid.

The strikers connected the financial troubles of the Chicago Public Schools with the broader impact of the statewide budget impasse on low-income families, particularly with regard to higher education. Throughout the day, marchers criticized racism and the police murder of youth of color.

Strike actions began at 6:30 a.m. at every Chicago public school. The CTU helped build coalitions in many communities to raise related local issues.

The youth support group ”Project NIA” [in Swahili, “nia” means “with purpose’] led a march from the Illinois Youth (Detention) Center on the Near West Side to Suder Elementary School. Protesters chanted, “We are gonna give you hell! Our city is not yours to sell!” and called for an end to the school-to-prison pipeline.  Chicago spends about $112,000 a year per youth in prison but only $15,000 per student.

CPS officials filed a charge with the Illinois Educational Labor Relations Board against the CTU, claiming the strike was illegal. “We disagree,” said CTU spokeswoman Stephanie Gadlin. “The Supreme Court 60 years ago authorized unfair labor practice strikes under the National Labor Relations Action and we believe teachers have those rights.” (ctunet.com)

When CPS cancelled school a week early so it could furlough workers and save money, the officials showed they didn’t care about parents’ childcare needs or children’s education.

Gov. Rauner is lobbying for a state takeover of CPS and the option to declare bankruptcy.

Teachers rallied at Northeastern Illinois State University against cuts and in solidarity with Chicago State University, which is scheduled to be shuttered after an early graduation in April. All workers at CSU have already been issued layoff notices and asked to turn in their keys.  Chicago State serves predominantly African-American students.

After a rousing action on campus resembling a New Orleans funeral march, with coffins and a jazz band to symbolize the death of public education, protesters marched to a McDonald’s in solidarity with the fight for a $15 an hour minimum wage. Supporters then got on buses to join the citywide downtown rally for the teachers.

Black Youth Project 100 held a teach-in at Chicago State. CSU senior Darren Martin told the paper Catalyst Chicago that it would be hard to find another university that has a resource center for African-American males, a president who talks with students one-on-one and a diverse faculty “who looks like you.”

‘Not a moment but a movement’

CTU President Karen Lewis, who received her teaching credentials at CSU, explained: “It’s not just us. This is not a moment. Brothers and sisters, this is a movement.”

Over 100 striking teachers at a Southwest Side school left the picket lines for a short time, but not for a rest. They marched over to the factory where Nabisco/Mondalez makes Oreo cookies. There, they joined forces with the Bakery Union (BCTGM) to oppose company plans to close the factory and move to Mexico, in order to undermine the union and drive down wages. The popular chant was “Teachers, Nabisco workers, we are with you!”

A CDA official called security and demanded the group move away from the door, prompting a picket line. Those rallying then explained that the administration was refusing to meet with the unions.

At the mass rally outside the Illinois State Building downtown, CTU President Lewis spoke to the crowd of over 25,000. “This is what happens when we come together and stop fighting each other and know who our enemies are,” she said. “Instead of somebody telling us why we shouldn’t be in the streets, we should take the street.”  The march then proceeded down Michigan Avenue, blocking traffic in a sea of red — the color of CTU shirts and hoodies.

This coming together of workers — from college professors to the most oppressed and exploited food workers to youth of color resisting police killings — is what solidarity looks like. Calling for a citywide strike against attacks happening across the state and around the world is how movements are built and victories are won.

Demonstrators showed they appreciated a statement from the Workers World Party Moorehead-Lilly presidential campaign — Monica Moorehead is a former public school teacher —  titled “We Salute the Chicago Teachers Strike! Shut down Racism, Capitalism and Injustice.” The candidates wrote: “The CTU is leading the way towards a better world, a world in which youth of color, immigrants, Black people, LGBTQ people and all working-class people are valued and whose needs are put first. We stand in total solidarity and admiration for this fighting organization and its allies.”