Syracuse, N.Y. — Workers in central New York state are battling wages too low to live on and wage theft with the help of the Workers Center of Central New York. On March 17, Workers Center organizers Rebecca Fuentes and Nikeeta Slade led a dramatic direct action to support a local restaurant worker. 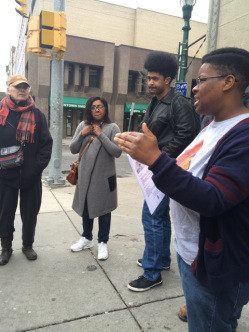 Thomas Colabufo had not received his final paycheck a month after leaving his job at Modern Malt, a “boutique” diner in the gentrifying Syracuse downtown area. After Colabufo’s spouse was leafleted about wage theft by Workers Center activists on the street, she contacted the Center for help.

The result was a determined group of 12 people — students, teachers, workers and retirees — who marched with Colabufo, his spouse Velvet and their child into the diner. They insisted on meeting with the owner and handed him a letter demanding the missing check be paid that day. There was a tense confrontation with the boss, who resorted to the usual verbal tricks — denying the problem, blaming the worker, name-calling and trying to provoke supporters. The owner ordered everyone off his property, which he interpreted as including the public sidewalk!

The Workers Center contingent stood firm. Despite the owner shouting loudly, “Tomorrow!” within two hours he had backed down and Colabufo had the hard-earned paycheck in his hand. The Workers Center-Central New York, a “grassroots organization focused on workplace and economic justice,” has conducted successful local actions against wage theft in construction, food service and janitorial services. (workerscentercny.org)

On March 15, farmworkers and Workers Center members Víctor Hernández and Antonio Salinas had travelled to the New York state capital, Albany, to join 5,000 other workers at a massive Fight for $15 rally. At a press conference, Hernández explained that he and his co-workers labored 72 hours a week for $9 an hour — not enough to pay their rent. He said $15 an hour for all workers would enable him to buy adequate nutrition to work the long hours. Big dairy farm owners and agricultural growers are mounting loud opposition to Gov. Andrew Cuomo’s proposed statewide hike of the minimum wage to $15.

A wide range of people, from farmworkers, custodians and airport wheelchair attendants to health care workers, attended the rally, sponsored by the Service Employees International Union. Various community groups attended to give support, including All* Above All, an organization working to restore and expand abortion coverage for low-income women. The group’s statement said: “We stand with Fight for $15 because ALL* of us deserve justice, respect and compassion, whether in our health care decisions or in our jobs.” (AllAboveAll.org)