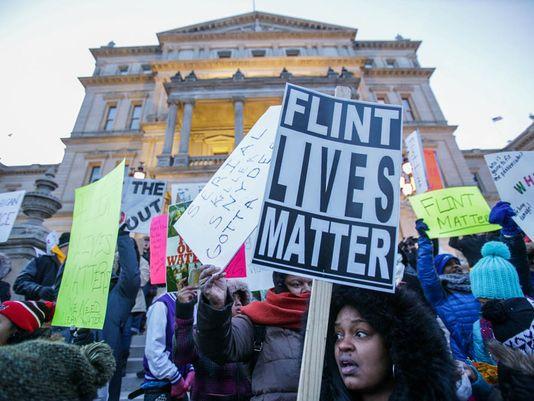 Michigan Gov. Rick Snyder must have a lot of bruises on his legs or behind. “I kick myself every day,” he told the Congressional Oversight and Reform Committee on March 17 when he testified about the Flint water crisis that occurred under his watch. He repeated this statement when grilled about his claims that he first learned about the lead poisoning of Flint in October 2015. Many believe he probably really knew or should have known about it much earlier.

Snyder’s self-deprecations and apologies will not assuage the wounds of Flint residents, 150 of whom made the long bus journey to Washington to attend the third congressional hearing on the Flint tragedy. They are tired of bottled water and what they have to go through to procure it. Flint’s compelling case of environmental racism has motivated a diverse range of groups and individuals around the country to donate water, supplies, funds and labor. But the donated cases of water are snatched up as soon as they arrive, proving that the state is not supplying enough water to meet community needs.

Billions of dollars are needed to fully address the many aspects of this crisis. The majority African-American city of 100,000 was poisoned when the city failed to add anti-corrosive chemicals to the water after disconnecting from the Detroit Water and Sewerage Department. Untreated water from the Flint River caused lead in the aging pipes to leach into the water supply. Now the price tag alone on replacing lead pipes is over $1.5 billion and the costs of meeting the health, nutritional and social service needs of the population are immeasurable.

So far only three homes have had their pipes replaced — two under the direction of Mayor Karen Weaver and one by the Flint Coalition. The state has yet to contribute one penny toward infrastructure repair, while the legislature drags its feet on appropriating the $232 million in aid — still a drop in the bucket — proposed by Snyder. Yet with or without state assistance, Flint’s people are determined to bring clean water back to their homes, house by house. With shovels and rented backhoes, in an act of resistance to environmental racism, the community is taking control of its destiny.

Testifying along with Snyder was Gina McCarthy, head of the federal Environmental Protection Agency. Committee Chair Jason Chaffetz and his fellow Republicans treated Snyder with kid gloves, attempting to foist most of the blame on the EPA for failing to aggressively intervene against the ineptitude and racist neglect of the Michigan Department of Environmental Quality (MDEQ). Chaffetz exploited statements by whistle-blowing water safety specialist Marc Edwards, who was critical of the EPA as well as the Snyder administration.

In contrast, members of the Congressional Black Caucus blasted Snyder for his role in the poisoning of Flint. Snyder had appointed Flint’s three consecutive emergency managers, who made and carried the decision to disconnect from Detroit water. Former Flint EM Darnell Earley had testified the day before. Earley’s involvement in the Flint scandal had led to calls for his removal from the job of EM over Detroit Public Schools; he resigned in February.

The governor oversees MDEQ, which consistently rules against protecting the environment and in favor of oil companies and frackers. Its appointed staff is more aptly characterized as political cronies than as scientific specialists. From April 2014, when the switch to the Flint River was made, until October 2015, MDEQ insisted Flint water was safe to drink.

Ranking Oversight Committee member Elijah Cummings of Maryland and others demanded Snyder’s resignation. Lacy Clay of Missouri pointed out the hypocrisy of Republicans blaming the EPA for not aggressively acting on a crisis a Republican governor created, especially considering their frequent charge of federal overreach by the EPA into states’ domains.

The Democrats, however, have no real plan of action to heal Flint or address the many current or looming water safety crises in the country. None of them are talking about canceling the debt service payments to the banks that are strangling poor, oppressed cities like Flint and Detroit. None of them are pointing the finger at General Motors, which has practically abandoned Flint, the city where GM was born. None of them are raising the slogan, “Money for Flint, not the Pentagon.”

Both Republicans and Democrats are quick to point political fingers at each other, but what drives the capitalist austerity that made Flint’s children sick is a rotten system of exploitation that puts profits ahead of our health and well-being.