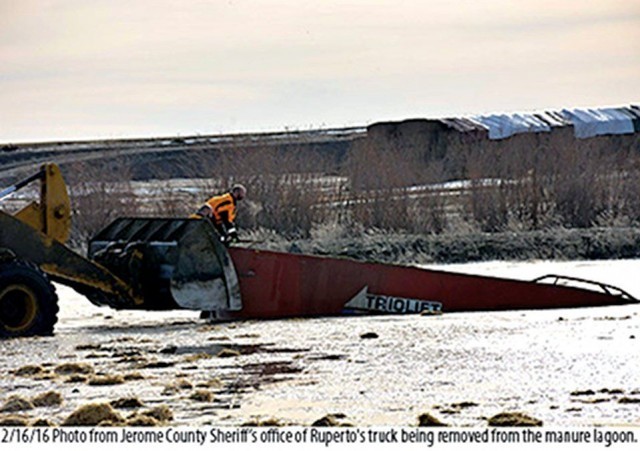 Last April 27, Workers World reported a similar fatal accident on a dairy farm in neighboring Washington state, where 27-year-old Randy Vazquez was killed on Feb. 24, 2015. Neither incident was isolated. Three dairy workers in Idaho were killed in 2013, while dairy farms in Washington average one death every 16 months and one serious injury every day — an injury rate 40 percent higher than in most private industries. “Agriculture, along with construction, is one of the most dangerous industries in [the U.S.],” said Washington State Labor Council President Jeff Johnson. “Accidents in the dairy industry in Washington state are higher than in agriculture as an industry.” (The Stand, March 16)

On Jan. 18, a modest dairy worker safety bill, House Bill 2484, backed by the UFW and the Washington State Labor Council, was introduced in the state legislature. But due to the powerful state dairy corporations — which earn $3.2 billion a year — the bill was essentially tabled on Feb. 9.

WW hopes the horrible death of Vazquez Carrera two weeks later will push the bill’s passage next year, before another death can occur.

The Vazquez Carrera family is accepting donations for Ruperto’s funeral at gofundme.com/napysugc.

On March 21, the first 277 workers received pink slips at the historic Nabisco bakery plant in Chicago that produces Oreos. Local 300 of the Bakery union (BCTGM) called a protest on March 23: “Laying off 277 workers here in Chicago in order to profit off the backs of low-wage earners in Salinas [Mexico] is wrong. In our opinion, what Mondelēz will be doing at the Nabisco plant on Wednesday is a crime. So come join us Wednesday morning at 6:30 a.m. to roll out yellow ‘crime scene’ tape outside the plant, and then join us for the follow-up press conference at 7:00 a.m. to express our outrage to the rest of Chicago.” (Facebook, BCTGM Local 300, March 20)

Mondelēz, the international snack food conglomerate that owns Nabisco, announced plans last June to close down Oreo production in Chicago, leaving over 600 out of 2,100 unionized workers jobless. When the workers refused to agree to an outrageous 60 percent cut in wages and benefits to keep their jobs in Chicago, Mondelēz announced it would outsource Oreo production to Mexico, where workers are paid a fraction of the wages in an unregulated, unsafe working environment. Meanwhile, CEO Irene Rosenfeld rakes in obscene yearly profits of over $20 million.

Workers at the Chicago plant, who are majority Black and Latino/a, have staged protests to rally community support to stop the outsourcing. To find out more about this struggle and sign a protest petition to Rosenfeld, go to FightForAmericanJobs.org.

A strike threat by the 4,200 workers in 11 unions who run the NJ Transit commuter railroad, which carries nearly a million weekday riders, went down to the wire on March 11. The threat of the strike, the first in 30 years, helped the workers win a mostly favorable contract. Though the contract has not been officially released and the workers have not officially ratified it, the terms include an annual salary increase of 2.5 percent, retroactive to 2011 and in force until 2019; and a cap on health insurance at about 2.5 percent of base pay, or about $40 a week. NJ Transit management had opposed retroactive pay and wanted a 10-20 percent hike in health insurance. But the only concession the bosses won was extending the contract another year and a half. (nj.com, March 14)