The Bernie Sanders campaign has a dual character. On the one hand, it has unearthed and given voice to widespread opposition to Wall Street and massive economic inequality and injustice. On the other hand, Sanders is running in the Democratic Party, which has been controlled for generations, and is controlled now, by the very financial oligarchs the Sanders’ supporters are rebelling against. 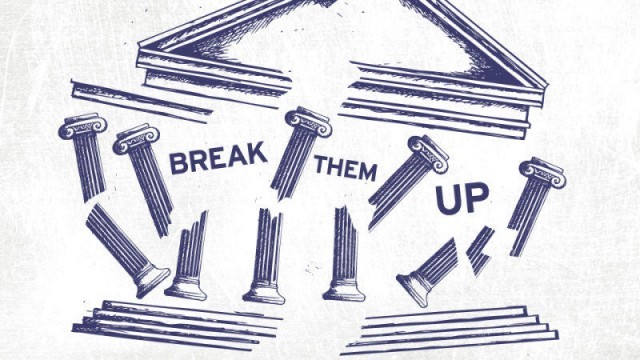 The mass response to Sanders’ call to break up the banks and make the rich pay for universal college education, universal health care, raising the minimum wage and so on is totally understandable. After decades of austerity, takebacks, union busting, racism and mass incarceration, it is no wonder that Sanders’ appeals have fallen like rain on dry grass.

But in the long run, the road to dealing with the banks, the billionaires and corruption does not lie through electoral politics and the Democratic Party. It lies through mass mobilization and independent struggle. The Sanders’ adherents are eventually going to have to come to grips with this hard truth.

That being said, whatever the final outcome of the Democratic Party primaries, at present it is undeniable that the Bernie Sanders campaign has given expression to the accumulating anger at Wall Street and the Democratic Party political establishment. Hillary Rodham Clinton, a known friend of Wall Street, a pro-Pentagon hawk and a thoroughly opportunist politician, represents that establishment.

When Sanders began his campaign, denouncing not only Wall Street but the upper echelons of the corporate monopolies, he was regarded as a minor candidate who would, at best, be a mere novelty in the campaign.

As a senator from a small rural state who called himself a democratic socialist, he was outside the Senate millionaires’ club and was expected to be a marginal candidate in the Democratic primaries.

But within weeks after he declared his candidacy and began to campaign, the capitalist media began to notice that he was drawing huge crowds on campuses, in cities, in rural areas, everywhere he went. His audiences numbered from a few thousand to 28,000 at a rally in Oregon.

The massive popularity of the Sanders campaign, especially but not exclusively among white youth, workers and young women, took the capitalist media and the political establishment by complete surprise.

It should be noted that Sanders has since expanded his appeal to African Americans and Latinos/as, with a number of prominent civil rights leaders, political figures and activists in the arts campaigning for him.

The message Sanders is preaching bares a close resemblance to the message Occupy Wall Street advocated.

In September 2011, OWS seized Zuccotti Park in Manhattan, established a general assembly in the streets and denounced the massive inequality in the U.S. This movement put forth the slogan, “We are the 99%.” It opposed the 1%, who control vast amounts of wealth. OWS was dedicated to direct action.

The assemblies quickly spread to many cities throughout the U.S., indicating that OWS had millions of passive sympathizers. Even the big business media had to feign sympathy for a while, until the police systematically swept the assemblies off the streets with brutality and arrests. The development of this movement, and especially its widespread support, took the ruling class totally by surprise. From the biased vantage point of their board rooms and estates, the rulers always underestimate the people’s wrath.

And just as they underestimated OWS, so they also underestimated the hatred for Wall Street and grinding inequality that has left a whole generation without a future. Economic and social conditions have gotten worse since 2011.

The Sanders campaign is, in some ways, a continuation of OWS in electoral form. Therein lies the appeal of Sanders and is the basis of his wholly unexpected electoral success.

Up against the machine

As of March 20, Sanders had accumulated over 6 million votes, not counting the caucus states of Iowa and Nevada. Even then, his vote count hardly reflects the popularity of his anti-banker, anti-billionaire message. He has raised $140 million in repeated small contributions from a record-setting base of 2 million-plus contributors and 4 million individual donations.

Yet, not all his supporters can vote in the primaries, for a variety of reasons — obstructive voter qualifications, age limits, conflicts with school, etc. By the time the campaign ends, Sanders will probably gain millions more votes.

His broad support is remarkable, since the campaign is up against the two most powerful political machines in capitalist politics, the Clinton machine and President Barack Obama’s machine, which have combined to block him in every way possible.These two machines are deeply entrenched nationally and have been in existence for years.

Hillary Clinton’s presidential campaign has been active since 2007. After she lost to Obama in 2008, her campaign quietly resumed during his administration. She had been a U.S. senator from New York, the home of Wall Street, and then became secretary of state, where she worked closely with the Pentagon.

Sanders began without any organization that could remotely match the Clinton machine.

Sanders is also up against the capitalist media. The media are using Donald Trump to boost their ratings and pile up profits. The Hollywood Reporter on Feb. 29 quoted CEO Les Moonves of CBS on Trump and the Republican “circus”: “It may not be good for America, but it’s damn good for CBS.”

Moonves went on: “The money’s rolling in and this is fun. I’ve never seen anything like this, and it’s going to be a very good year for us. Sorry. It’s a terrible thing to say. But, bring it on, Donald. Keep going.”

Moonves would hardly mind having millions of viewers who would likely watch Sanders on a daily basis the way Trump is viewed. But Sanders has attacked too many millionaires and billionaires and won’t take their money. So for the media moguls, politics come before ratings.

The networks are billionaire corporations. They feel fine publicizing Trump. But between Sanders and Clinton, they are all for Clinton. “Fairness and Accuracy in Reporting” wrote on March 20 that the Washington Post printed 16 negative articles about Sanders in 16 hours. The Post is owned by Jeff Bezos, whose Amazon.com fortune is worth $50 billion.

The New York Times marginalized the Sanders campaign to such an extent that its own readers rebelled and the Times’ public editor had to publicly rebuke the management.

The Tyndal Report, which tracks campaign media coverage, reported that in 2015 Clinton received 121 minutes of coverage (excluding the hearings on her emails) and Sanders received 20 minutes.

The media want to conceal labor’s significant support for Sanders. The Communication Workers, the National Nurses Association, the American Postal Workers and over 40 local unions have endorsed him. All the unions that endorsed Sanders polled their rank-and-file members.

The unions that endorsed Clinton did it by executive action, without consulting the rank and file. But because of the strong rank-and-file support for Sanders, the AFL-CIO leadership has been unable to endorse Clinton.

Bankers, financiers and corporate heads want to bury Sanders. Lloyd Blankfein, CEO of Goldman Sachs, is perhaps the most powerful and influential banker in the U.S. Sanders called him out for his greed and his guilt in the financial crisis. Blankfein responded on CNBC on March 3, saying of Sanders’ campaign, “It has the potential to be a dangerous moment, not just for Wall Street, not just for the people who are targeted, but for anybody who is a little bit out of line.”

Who are the people Blankfein was talking about? They are the 18 top corporate criminals Sanders named for massive tax dodging and who were complicit in the economic crash of 2008. They include Brian Moynihan, CEO of Bank of America, the bank that got $1.3 trillion from the government bailout; Blankfein of Goldman, which got $824 million from the Treasury bailout; James Dimon of JPMorganChase, which got $416 billion in a bailout; Boeing; GE; and so on.

Sanders lists all the jobs the corporations moved overseas, the billions in taxes they would have owed except for offshore tax havens and the fact that many of them paid zero taxes. (trueactivist.com)

These management decisions must be what Blankfein meant by being “a little bit out of line.”

The rules of U.S. capitalist electoral politics are extremely restrictive, even in comparison with other capitalist countries. The elections are winner-take-all, which rules out proportional representation. For anyone but Democrats or Republicans just to get on the ballot, there are onerous petition requirements. Campaigns are extremely expensive, which has made it easy for the rich to totally control the election process — even before the “Citizens United” Supreme Court decision removed donation limits.

Now it has happened with Sanders. However, progressives and revolutionaries must not overlook Sanders’ negative side and the deceptive lure of the Democratic Party. Sanders has still failed to fully embrace the Black Lives Matter movement and the struggle against racism and police brutality. He has yet to denounce the multi-trillion-dollar rathole of military spending that starves social services. He has been ambivalent about Cuba, defending its social gains in one breath and calling it a dictatorship in the next. He is a supporter of Israel and has many other contradictions.

In addition, all true advances of the people have come not through elections but through struggle. Union rights, social security and welfare were won in the 1930s through marches, general strikes and sit-down strikes. Civil rights were won through the struggle of millions of African Americans and white progressives who sat in and faced the police. Anti-poverty measures were won by rebellions in cities throughout the country. Women’s rights were gained by marches and protests. The fight for lesbian, gay, bisexual, transgender, queer rights began with the Stonewall Rebellion. Harsh anti-immigrant legislation was defeated by the historic strike of millions of immigrants on May 1, 2006.

Reforms are always a reflection of prior struggle.

Above all, while Sanders’ self-description as a democratic socialist has legitimized the term socialism, he is, in fact, a liberal reformer of capitalism. He wants to make the system of capitalist exploitation more humane. A real socialist stands on the platform of abolishing capitalism.

It is not enough to break up the banks. It is not enough to curb corporate greed. As long as the banks and the corporations have control of the economy, they have tens of thousands of threads by which they can control the government, the state, the treasury and the economic life of the country.

True socialism seeks to abolish the system of wage slavery altogether and place the economy in the hands of the workers and the oppressed. The economy must be run in a planned way for the health and benefit of the people and not for profit of any kind. This is the way to end income inequality, injustice and oppression of all types.

There is a way to register support for revolutionary socialism without embracing the two-capitalist-party system. Vote for Monica Moorehead for president and Lamont Lilly for vice president on the Workers World Party ticket.