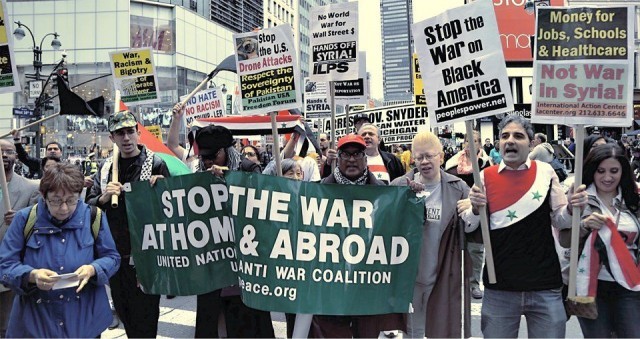 Hundreds of people rallied in New York’s busy Herald Square on March 13 for a day of Peace and Solidarity. Called by the United National Antiwar Coalition (UNAC), the protest called attention to the fact that none of the major candidates are speaking about the U.S. wars and interven­tions happening in many parts of the world.

The protest called for an “End to the Wars at Home and Abroad.” This was reflected by banners and signs that included, “Money for Jobs and People’s Needs, not War,” “Rebuild Flint! Rebuild our Cities! End the Wars,” “Defend the Black Lives Matter movement” and “No to ­Islamophobia.”

A number of groups supported the rally, including the International Action Center, the Islamic Leadership Council of New York, Al-Awda: The Palestine Right to Return Coalition, BAYAN USA, the People’s Organization for Progress, the U.S. Peace Council, World Can’t Wait, World Beyond War, the Haiti Support Network, Action 21, the Syrian American Will Association, the Manhattan Greens and many others.

The rally was chaired by leaders of ­UNAC-affiliated groups, including UNAC co-coordinator Joe Lombardo, Sara Flounders of the International Action Center, Margaret Kimberley of Black Agenda Report, Nat from BAYAN USA and Terrea Mitchell of the People’s Power Assembly.

The speakers included Imam Abdul Rashid Talib of the Mosque of the Islamic Brotherhood and former president of the Islamic Leadership Council of New York City, Kathy Kelly of Voices for Creative Non-Violence, former Army Col. Ann Wright, president Al Marder of the U.S. Peace Council, Khaldoun Makhoul of the Syrian American Will Association, Nina Macapinlac of BAYAN USA, Lawrence Hamm of the People’s Organization for Progress, Flounders, Kimberley and many others.

After a two-hour rally, protesters took to the streets for a march to the United Nations. Along the route, they received many enthusiastic signs of support from people on the streets. At the U.N., others, including attorney Lynne Stewart, spoke and the Raging Grannies sang.

Though it is usually difficult to break into the corporate media in New York, the event got wide coverage, from local television and radio stations to many international news outlets.