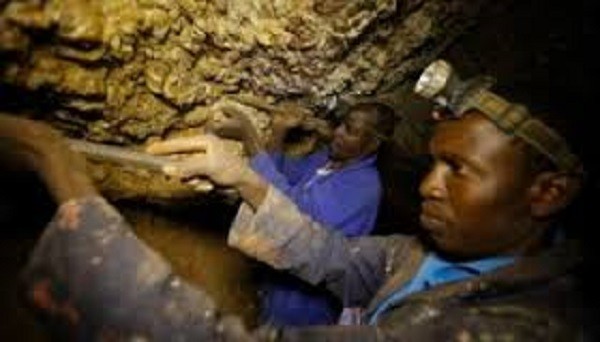 The Zimbabwe ministry of mines announced in the capital Harare on Feb. 23 that all but one of the firms involving in mining and exporting gems from the country was being closed. Many of the mining firms’ executives were at the media briefing after the decision had been delivered to them earlier in the day.

These developments must be viewed within the broader context of a worsening crisis in Zimbabwe and neighboring South Africa centered around the economic impact of declining commodity prices and the continuing integration into the world capitalist system.

Permission to mine diamonds had been issued in the past to Anjin, Diamond Mining Corporation, Jinan, Mbada Diamonds, DTZ Ozgeo, Rera, Gye-Nyame, Kusena and Marange Resources.

Minister of Mining and Development Walter Chidhakwa said, “Since they no longer hold any titles, these companies were notified this morning to cease all mining activities with immediate effect and to vacate the mining areas covered by special grants for diamonds. They have been given 90 days within which to remove their equipment and other valuables.” (Zimbabwe Herald, Feb. 23)

Negotiations had been going on between the Zimbabwe government and the mining firms for several months. No agreement was reached on how to consolidate production. The Zimbabwe African National Union-Patriotic Front (ZANU-PF) government had proposed combining operations into the Zimbabwe Consolidated Mining Company, but said the firms were not willing to cooperate.

The Zimbabwe government is now saying that it will proceed with mining under the control of a state-owned corporation. Nonetheless, it was not clear to what extent foreign interests will be sought to participate in diamond mining and marketing.

Chidhakwa said that firms representing foreign interests were still able to open up discussions on joint ventures with the state-owned firm. He expressed concern about transparency in the market amid the precipitous decline of nearly 30 percent in prices for gems since 2014.

Mining firms operating in Zimbabwe, which is one of the leading diamond-producing states globally, focus heavily on alluvial extractions involves digging and sifting through mud, sand and gravel. These require less capital as gems are easily gathered. However, most alluvial gem deposits are exhausted. Local miners claimed they lack the technical capacity or the resources to search for other possible deposits underground.

“Consultation with the existent diamond companies, which took over seven months to allow for extraordinary shareholder general meetings, achieved no consensus between government and the companies on the consolidation issue,” Chidhakwa emphasized. “There was evidence of the desire by the companies to extend the process of negotiation for indeterminable periods at a time when the industry is in decline and definitely in trouble. This was not and remains an unpalatable choice for the government.”

The Marange diamond fields are said to be one of the most lucrative in the world, yet people living in the vicinity are suffering from food shortages and other economic problems. This situation is further aggravated by reports that the gems are being rapidly depleted.

An article published Feb. 23 by Thomson Reuters Foundation says the Marange fields were “estimated to have produced around 17 million carats in 2013, 13 percent of the global rough diamond supply, according to the Zimbabwe Mining Development Corporation. Marange produced 12 million carats in both 2012 and 2014, while production figures for 2015 are not yet available.”

Nevertheless, the reports goes on: “When the Zimunya-Marange Community Share Ownership Trust was set up by President Robert Mugabe in 2012, the five diamond companies operating there promised to put in $10 million each to support local villagers over the coming five years. Four years on, they have deposited only $400,000 in the trust.”

In a recent television interview, President Mugabe outlined why the measures were taken. He admitted that the country had not sufficiently benefited from the agreements signed with these firms. (Zimbabwe Herald, March 4)

The president and first secretary of the ruling ZANU-PF said, “We have not received much from the diamond industry at all. Not much by way of earnings. I don’t think we have exceeded $2 billion or so and yet we think that well over $15 or more billion dollars have been earned in that area. So where have our gold or carats been going[?] … [T]here has been quite a lot of secrecy in handling them and we have been blinded ourselves.”

Mugabe also mentioned in the interview that he had told People’s Republic of China President Xi Jinping that the government was not satisfied with the performance of the Beijing-based firm which operated in the mines. However, the president did not think the closing down of operations of the Anjin firm would damage relations between China and Zimbabwe.

In the same interview Mugabe said, “I told President Xi Jinping that we were not getting much from the company, and we didn’t like it anymore in this country. So we wanted it to go back.”

Perhaps in response to this interview with Zimbabwe’s president, the state-controlled Herald newspaper reported on March 7: “China will deliver on all mega deals signed between President Mugabe and his Chinese counterpart President Xi Jinping, and the Asian economic giant will not disappoint Zimbabwe, China’s director of African Affairs Department Mr. Lin Songtian, said last Friday. This poured cold water on speculation that the deals now hung in the balance after the government ordered all diamond mining firms, including those owned by the Chinese, to leave Chiadzwa for refusing to join the Zimbabwe Consolidated Diamond Company.”

El Nino and the economic crisis

In addition to the drop in diamond prices, a drought has struck the region, creating conditions that have impacted energy generation, agricultural production and international food assistance. The lack of rain and excessively warm weather have led to crop failures and shortages of water resources.

An article published March 7 by the Chinese-based Xinhua News Agency reported, “El Nino conditions have caused the lowest recorded rainfall between October 2015 and January 2016 across many regions of Southern Africa in at least 35 years. The period also recorded the hottest temperatures in the past 10 years. Poor rainfall, combined with excessive temperatures, has created conditions that are unfavorable for crop growth in many areas, according to the report.”

This report reveals, “In Lesotho, South Africa, Swaziland, Zambia and Zimbabwe, planting was delayed by up to two months or more, and is expected to severely impact maize [corn] yields. Already an estimated 15.9 million people in Southern Africa are highly food insecure.”

The ZANU-PF government is mulling over a way forward, which portends much for the political situation throughout the region and the continent as a whole.

In South Africa, the economic powerhouse of the region, the value of the national currency (rand) has declined significantly, creating mounting hardships which have aggravated political tensions between the ruling African National Congress and various opposition parties.