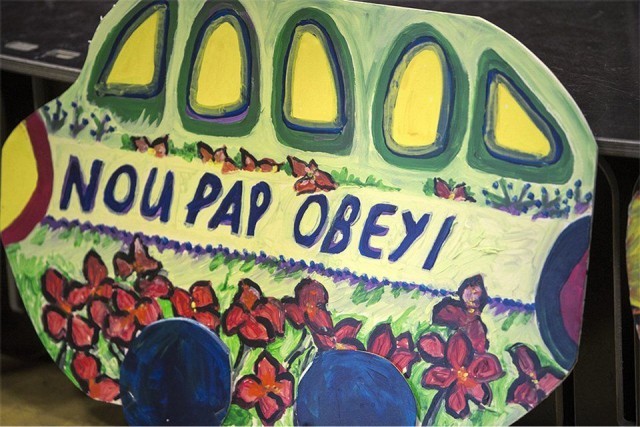 ‘We will not obey’ — slogan of the mass movement resisting the stealing of Haiti’s elections. Photo: Malaika Kambon

Oakland, Calif. — An event commemorating the 25th anniversary of the inauguration of Haiti’s first democratically elected president, Jean-Bertrand Aristide, was held at the Eastside Arts Alliance in east Oakland on Feb. 28. The event also marked 12 years since the Feb. 29, 2004, U.S.-backed coup d’etat, which overthrew Aristide and the progressive Lavalas government. The United States and its allies installed a United Nations military occupation of Haiti that continues to this day.

In addition to powerful drumming, there were talks by Pierre Labossiere of the Haiti Action Committee; Walter Riley, a civil rights attorney and chair of the Haiti Emergency Relief Fund; and Lara Kiswani of the Arab Resource & Organizing Center.

The event was organized by the Haiti Action Committee, which issued this statement: “This is a critical moment to stand with Haiti, denounce U.S. attacks on Haiti’s sovereignty and defend Haiti’s popular movement. Tens of thousands of Haitians face tear gas and live ammunition in almost daily demonstrations demanding free and fair elections and an end to foreign intervention. The power of this movement forced postponement of a fraudulent presidential ‘runoff’ scheduled for Jan. 24th.”